Washington  — Washington is entering a new era of kamikaze governance, this time with Democrats at the helm.

Thursday night’s spending showdown saw progressive Democrats unexpectedly emerge as the agitators ready to drive the nation off a cliff to win concessions — and progressives say it will happen again.

«The fight last night was a shot across the bow that progressives are ready to stand and fight, and there are millions of Americans ready to jump into the fray,» Ben Wikler, Washington director for MoveOn.org, a progressive group, said on Sunday.

Progressive members of the Democratic Party are gearing up for what they expect to be many battles needed to defend their values as Republicans seek to chip away at a variety of Democratic priorities when they take control of Congress next year. 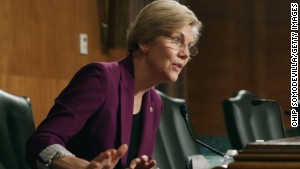 A prime example of such skirmishes came last week. Massachusetts Sen. Elizabeth Warren objected to a GOP provision — attached to a broad spending bill — that rolled back a key portion of the Wall Street reform law. Her opposition prompted dozens of Democrats to defect and triggered a last-minute scramble for support; President Barack Obama himself made calls to win lawmakers back and stave off a potential government shutdown.

The spending bill eventually passed the Senate on Saturday night and on Sunday, Democratic leaders downplayed a possible rift within the party.

But the nearly 2,000 progressive activists and operatives who descended on Washington over the weekend for the annual Rootscamp gathering felt otherwise.

Panels addressed things like #HillaryProblems and the lack of understanding between the grassroots and establishment wings of the Democratic Party. And panelists and attendees alike endorsed the newly antagonistic moves from their elected officials this week.

«How do we make change in general, as we’re seeing from the streets of DC to Ferguson to New York? I do think that sometimes you have to shut it down,» said Alana Krivo-Kaufman, a 27-year-old Rootscamp attendee and an organizer with Jewish Voice for Peace.

And with Republicans taking control of the Senate next month, the imperative for progressives to hold their ground on key issues could grow ever more urgent.

Jim Manley, a Democratic strategist and former Senate leadership aide, said Republicans have given every indication they’ll attempt to use a series of upcoming deadlines, including the need to raise the debt ceiling next year, to peel back Democratic policies passed under Obama.

«What we saw just now is just a taste of what’s to come for two years,» he said.

Obama’s standing within the party diminished

And Democrats no longer feel beholden to their de facto leader — the President — as he enters the final, lame-duck years of his presidency. Some now openly admit he’s going to have to navigate a difficult terrain within his own party in the new Congress.

«Everybody’s sort of figuring it out, post-midterms, how it’s all going to shake out,» he said of Obama’s leadership role among Democrats. «I’m sure there’ll be other disagreements. And it’s a different world with a Republican Senate and a Republican House.»

Many progressives are frustrated with what they believe has been too much waffling from the President and other Democratic leaders on the issues that matter most to the base — behavior they argue contributed to their losses in the midterms.

«All the Democrats who lost were ones who ran to the center,» Krivo-Kaufman said, echoing a frequent refrain heard from panelists at Rootscamp.

That frustration has fueled a progressive backlash against the more moderate dealmakers in the party, and is what’s made Warren so attractive to so many, her supporters believe.

Erica Sagrans, who heads a grassroots super PAC working to draft Warren to run for President, said the issue with candidates in the midterm was they were «afraid» to stand on their principles.

«We can’t have candidates who are afraid to take risks and say what they believe in and stand up for something,» she said. «You can’t just have these Democrats who are everything to everyone and play things very safe and are picked by party insiders to not offend anyone.»

Sagrans said the watered down soundbites are meaningless to voters, whereas, «Warren’s style of being unafraid of who she is, of being honest, of speaking up» resonates.

The elevation of Warren as a prominent figure in these policy fights, and of Wall Street reform as a key issue for progressives, is certain to put former Secretary of State Hillary Clinton in a difficult spot as she prepares for a potential presidential bid. More than 300 formerObama campaign staffers signed a letter urging Warren to run for President this week.

Clinton, meanwhile, continues to face skepticism from progressives who believe she’s too cozy with Wall Street.

And while Warren has repeatedly said she’s not interested in a run, her supporters believe even having her in the mix, and focusing the conversation on Wall Street reform, could help shape Clinton’s potential candidacy.

Indeed, the activity surrounding Warren, and the emerging rift within the party, had even Democratic Party officials on Friday predicting a spirited primary battle for the presidential nomination.

«Regardless of who decides to run, we’re gonna have a really competitive and interesting primary process,» said Matt Compton, the Democratic National Committee’s digital director.