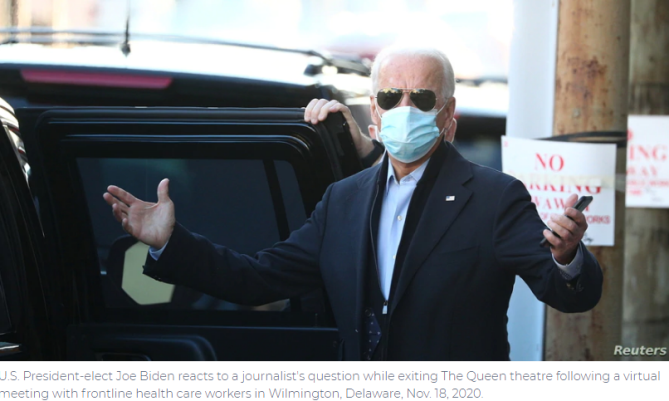 WHITE HOUSE – U.S. President-elect Joe Biden on Wednesday declared that the battle against COVID-19 “is like going to war. You need a commander in chief.”

During a virtual roundtable discussion with front-line health care workers, whom he hailed as heroes fighting the coronavirus, Biden predicted: “I’ll make mistakes. But I promise you I’ll acknowledge them when I make them, as well as I’ll take responsibility.”

Biden, the projected winner of the Nov. 3 election against President Donald Trump, said when he is sworn into office, he would urge state governors to order mandatory masking, testing, tracing and social distancing.

Biden also said it is important to find a way to get children back to school, as “they’re going to be behind the curve,” missing so much classroom time due to the pandemic.

As the discussion was under way, New York City announced its public schools district, the largest in the country, would close to in-person learning, due to a rise in COVID-19 cases.

Nurses and other first responders told Biden about the challenges faced by them and their colleagues, including a shortage of needed supplies to protect themselves and others from the virus.

“The idea that hospitals have to compete with each other” for access to personal protective equipment during the coronavirus pandemic “is bizarre,” Biden said.

A nationwide hospital crisis is looming, as the number of COVID-19 cases climb in all 50 U.S. states ahead of the Thanksgiving holiday period when millions of people will travel for family reunions.

More than 11.4 million people in the United States have tested positive for the coronavirus and about 250,000 have died of COVID-19, according to Johns Hopkins University.

Biden again blamed the General Services Administration for not recognizing his election and preventing federal officials, including those focused on the coronavirus, from being allowed to cooperate with his transition team.

Trump is continuing to block his Democratic challenger’s official transition to power, refusing to allow Biden to see the “President’s Daily Brief” of U.S. intelligence analysts’ assessment of the world’s trouble spots or to give Biden’s team access to a long list of government agencies.

Wednesday, as on most recent days since the November 3 election, Trump had no public appearances scheduled and remained at the White House tweeting that he won the election and alleging the vote in key states won by Biden was rigged against him.

In one tweet, he said, in all caps, “AND I WON THE ELECTION. VOTER FRAUD ALL OVER THE COUNTRY!”

Election officials throughout the country have told VOA and other U.S. news organizations they have found no evidence of widespread voter fraud, only relatively small incidences of possible voting irregularities that would not be enough to overturn the outcome of the election, even if Trump were to win his lawsuits.

Trump on Tuesday fired the head of a government cyber-security agency, Christopher Krebs, who had disputed the president’s claims of ballot fraud.

Trump press secretary Kayleigh McEnany told the “Fox & Friends” show, “This president has said he is always willing to engage in a peaceful transfer of power if the facts bear out that way. But the president believes, and so, too, do many others, that if every legal vote is counted, he will remain president. He’s pursuing litigation, but this president always wants what’s in the best interests of our country.”

McEnany, who has not held a briefing for the media since October 1, declined to answer questions on camera from White House reporters on Wednesday.

Vote counts are in the final stages in numerous contested states, but all major news media in the U.S. have declared Biden the winner, saying he has accumulated well more than the 270-vote majority he needs in the 538-member Electoral College to claim a four-year term in the White House.

The Electoral College is determinative in U.S. presidential elections, not the national popular vote, although Biden also leads Trump in the ballot count currently by more than 5.7 million votes.

The southern state of Georgia is winding up its recount Wednesday. In the initial count, Biden led by about 14,000 votes in the contest for the state’s 16 electoral votes.

But 2,600 uncounted ballots were discovered in a Trump-leaning community that are expected to cut Biden’s statewide advantage to about 13,000 votes, though they will not reverse the overall outcome in a state no Democratic presidential candidate had won since 1992.

Georgia’s deadline to complete its audit of counties is 11:59 p.m. Wednesday.

The Trump campaign paid $3 million Wednesday to Wisconsin for a partial recount in two liberal areas in the Midwestern state won easily by Biden — the city of Milwaukee and Dane County.

Trump lost Wisconsin to Biden by 20,608 votes after capturing it in 2016 over Democrat Hillary Clinton by 22,748 votes. Ten electoral votes are at stake in the state.