Top Republicans Line Up Behind Trump Challenge to Biden Victory 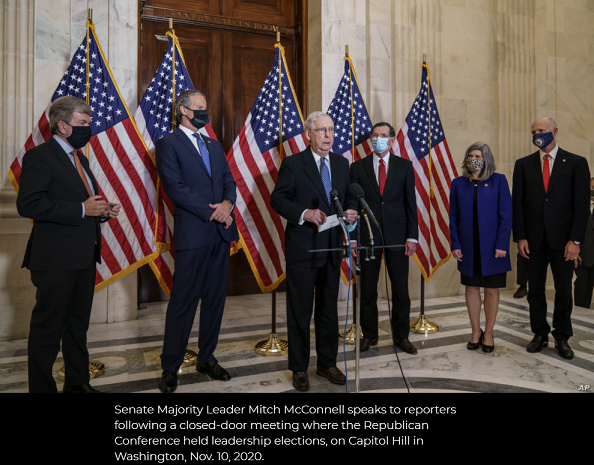 WASHINGTON – Key Republican leaders in Washington are siding with President Donald Trump in his uphill legal fight to show that vote-counting fraud is widespread enough to overturn the projected presidential election victory of Democrat Joe Biden.

Biden said Tuesday Trump’s failure to recognize the election results was an “embarrassment.” He added he had not yet spoken with Senate Majority Leader Mitch McConnell, who has yet to acknowledge Biden’s win.

“I think that the whole Republican Party has been put in a position, with a few notable exceptions, have been mildly intimidated by a sitting president. But there’s only one president at a time, he’s president, we’re going to have the Electoral College — they will be making their judgment in December,” Biden told reporters in Wilmington, Delaware.

A handful of current Republican lawmakers and a broader list of former Republican officials are acknowledging Biden’s win in last week’s national election.

But McConnell, along with House Minority Leader Kevin McCarthy, said Trump need not concede the election as his campaign files suits alleging voting and vote-count irregularities.

“Until the Electoral College votes, anyone who’s running for office can exhaust concerns about counting in any court of appropriate jurisdiction,” McConnell told reporters Tuesday. “It’s not unusual. It should not be alarming.

“At some point here, we’ll find out finally who was certified in each of these states, and the Electoral College will determine the winner,” McConnell said. “And that person will be sworn in on January 20.”

When asked Tuesday at the State Department whether he would cooperate with President-elect Biden’s team on a transition, Secretary of State Mike Pompeo told reporters, “There will be a smooth transition to a second Trump administration.”

So far, Trump has lost the first five lawsuits that have been decided, with perhaps a dozen more yet to be considered by judges around the country. Political analysts say that even if Trump is successful in some of the remaining suits, the vote totals that would change in a handful of states would not overturn Biden’s victory.

Biden’s winning effort to become the country’s 46th president became apparent on November 7, when the outcome in the eastern state of Pennsylvania tipped in his favor, giving him more than the 270 votes needed in the Electoral College, which decides the outcome of U.S. presidential elections, rather than the national popular vote.

“Make no mistake about this — that this is not one state where there’s a 597-vote difference” as there was in Florida during the disputed 2000 election, the Democratic lawmaker told reporters Tuesday.

“These are many states where there are tens of thousands of votes,” Schumer said. “And the Republicans have no legal case. They are politically distraught. But that’s not going to create any success for them in the courts.”

So far, Trump has neither conceded defeat nor called Biden to discuss the contentious election. Instead, the U.S. leader, now likely the third president in the last four decades to lose a re-election bid after a single term in the White House, has posted a string of claims on Twitter asserting election fraud.

“WATCH FOR MASSIVE BALLOT COUNTING ABUSE AND, JUST LIKE THE EARLY VACCINE, REMEMBER I TOLD YOU SO!” Trump said in all caps Tuesday morning.

“WE ARE MAKING BIG PROGRESS. RESULTS START TO COME IN NEXT WEEK. MAKE AMERICA GREAT AGAIN!” he claimed in another tweet.

Republican Senator Mitt Romney of Utah, who lost the 2012 presidential election to former President Barack Obama, and a handful of other Republican lawmakers have congratulated Biden, but most have either encouraged Trump’s challenges or stayed silent about Biden’s win.

McCarthy told “Fox News Sunday,” “We’ve had the most competitive presidential race in our modern history. That’s why every vote should be counted, every recount to go forward, and every challenge should be heard.”

Another Trump supporter, Senator Lindsey Graham of South Carolina, said, “This is a contested election. The media doesn’t decide who becomes president, if they did, you would never have a Republican president forever.”

Attorney General William Barr authorized 92 federal prosecutors throughout the country to pursue credible accusations of wrongdoing, although no allegations of election-changing wrongdoing have emerged to date.

About a dozen Republican state attorneys general said they support a legal effort pending before the U.S. Supreme Court to throw out mail-in ballots in Pennsylvania that were received after the November 3 Election Day. But the small number of votes that could be affected would not be enough to change the outcome in the state.

In Georgia, Biden’s 12,293-vote lead over Trump is close enough that a recount will be conducted. However, Republican Secretary of State Brad Raffensperger, the top elections official in the state, emphasized it was unlikely to change the outcome there.

Some Republicans no longer in office urged Trump to accept the reality of his loss.

A group of 31 former Republican members of Congress — many of them vocal critics of the president — denounced Trump’s allegations of fraud in an open letter that called on him to concede.

“By all credible accounts, state election officials have been diligent in conducting a fair, legal and accurate count — county by county, state by state,” the four former Homeland Security secretaries said in an open letter.

“President Trump is assured the benefit of a fair process and the right to file legal challenges and request recounts in certain states, but his legal claims cannot and must not prevent the transition process from beginning.”

Biden has started planning for his administration’s early days in office, especially in how to curb the coronavirus pandemic that according to Johns Hopkins University has killed more than 238,000 Americans.

As he claimed victory on Saturday night, he said, “It’s time to put away the harsh rhetoric, to lower the temperature, to see each other again, to listen to each other again.”