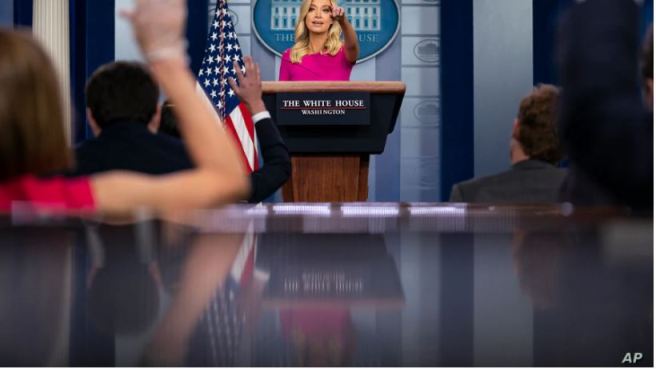 WHITE HOUSE – The White House is downplaying the rising number of cases of the coronavirus in the United States.

The United States accounts for 20% of new coronavirus cases globally.

Nearly 2.3 million people have tested positive for COVID-19 in the country.

The virus killed more than 120,000 people in the United States.

“We’re pleased to see that number coming down,” McEnany said of the trend for fatalities.

Reports from 31 of the 50 U.S. states, however, show reproduction rates of infection of going above one, meaning each person is passing on the virus to more than one person, a scientific indicator of an epidemic expansion.

“It was a comment that he made in jest,” McEnany told reporters at Monday’s White House briefing. “The president has led the way in making us the world leader” in COVID-19 testing.

Trump was asked in a Scripps television interview Monday if he had indeed asked for testing to be slowed. He did not directly answer the question, instead saying, “If we did slow it down, we wouldn’t show nearly as many cases.”

McEnany was also repeatedly questioned by reporters during Monday’s briefing about Trump, during the Tulsa rally, referring to the coronavirus as the “Kung Flu.”

The press secretary did not answer whether the White House considers the term racist.

“The media is trying to play games” with the terminology of the virus, which was first reported in Wuhan, China, responded the press secretary, who explained that “the president never regrets putting the onus back on China.”

In March, when counselor to the president Kellyanne Conway was told by Jiang that a White House official anonymously used in her presence the term “Kung Flu,” the administration official said such a name was “highly offensive” and pressed the reporter to reveal who had used the moniker.

Trump’s focus in recent weeks has been on reopening the U.S. economy crippled by the pandemic, while continuing to blame China for not preventing the virus’s spread.

Trump’s reelection campaign faced criticism for Saturday’s hosting of the largest indoor event in the country in months amid the pandemic, especially in a state where the number of coronavirus cases has been surging.

The political rally attracted far fewer supporters than the campaign had anticipated, filling only 6,200 out of the 19,199 seats in the Bank of Oklahoma Center, according to the Tulsa Fire Department.

The Trump campaign had claimed it had received more than a million requests for tickets.

Trump on Tuesday heads to the southwestern state of Arizona where the number of coronavirus cases has doubled in the past two weeks.

The president is to inspect the under-construction border wall in Yuma, which is one of the nation’s hot spots for COVID-19. He is then scheduled to deliver a campaign speech to more than 3,000 people, most with the group “Students for Trump,” at a church in Phoenix.

Both Yuma County and the city of Phoenix have mandated the wearing of face masks in public.