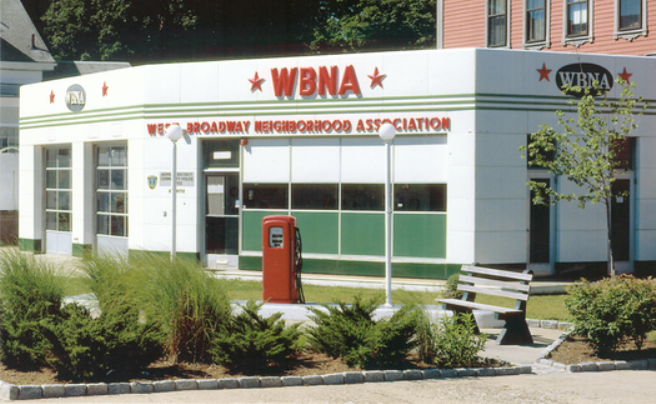 At fourteen, the number of submissions exceeded expectations and represent a breadth of creative designs and diverse uses. On behalf of the four-person blind jury, PPS and WBNA recognize and congratulate two outstanding proposals:

The Canonicus Prize: ONE Neighborhood Builders

Both projects retain the Georgian Revival bank and 1978 annex buildings and call for the addition of new, infill construction on Westminster and Cranston Streets— rebuilding the street faces that have long been lined with surface parking. They also feature green space on the interior of the triangular site, address circulation and parking, and, importantly, provide affordable housing and market-rate units.

The ONE Neighborhood Builders team led by Haley Hardwick-Whitman presented a sensitive and realistic scheme that imagines transit-oriented development with 3-5 story multi-family dwellings. The proposal, which they named “Canonicus Commons,” is a mixed-use, mixed-income development designed to serve the neighborhood with pedestrian-scale residential and commercial buildings. A public market occupying the 1921 bank building was featured in this proposal, and in many others, and was applauded by the jury.

The Ryan/Clouse team anchored their mixed-use design with a hotel and restaurant in the existing buildings. This thoughtful and comprehensive submission is recognized for its impressive detail, particularly the sensitive treatment of the annex to provide first-floor storefront entrances for small, local businesses. The jury was pleased to see adherence to first floor commercial use as prescribed in the zoning ordinance.

The other submissions presented a variety of creative uses from urban vineyard to a pedestrian rollercoaster to new center for public education administration. The jury found noteworthy and successful aspects across several entries, such as acknowledgement of the multi-generational constituencies around the site (high school students to seniors), attention to pedestrian and vehicular access to and through the site, and the shared desire for a community marketplace.

The purpose of this design competition was to reimagine the potential of the site, comprised of six contiguous parcels between Westminster and Cranston Streets beginning with the former Citizens Bank building. For decades, the bank’s flagship was located at this historic gateway, known variously as Hoyle Square, Burgess Square, and Canonicus Square. Soon after Citizens Bank vacated the property in 2019, PPS named the site a 2020 Most Endangered Property.

Presently, a private developer is pursuing City Plan Commission approval of a proposal that is inadequate and inappropriate for the site’s historic significance and potential. The project, which requires three design waivers, ignores best practices in urban design and planning according to PPS and WBNA.

PPS and WBNA thank all of the individuals and teams who contributed entries to the design competition. We are hopeful that the ideas and designs generated by this exercise will provide tangible and beneficial alternatives to what is currently proposed. We invite the developer to adopt ideas within these two winning projects, and for elected and appointed officials to be inspired by a greater vision for the neighborhood and city as decisions are made during this once-in-a-century development opportunity.

More information about the design competition and project site can be found at http://ppsri.org/west-end-gateway-design-competition/.