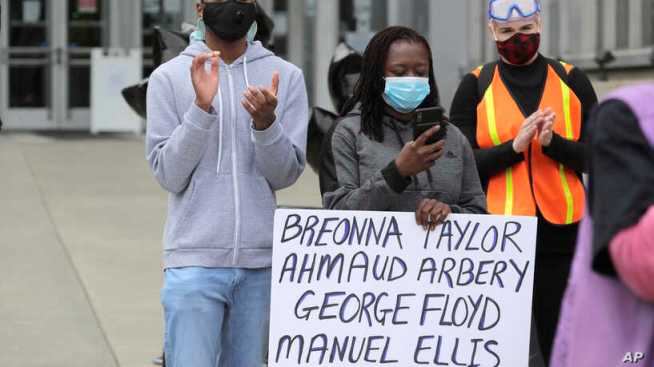 The death of a 33-year-old black man who was heard saying, “I can’t breathe,” while in police custody in Tacoma, Washington, has been ruled a homicide, according to a medical examiner’s report released Wednesday. The mayor of Tacoma has since called for the arrest of all four officers involved.

“The officer who committed this crime should be fired and prosecuted to the fullest extent of the law,” said Tacoma Mayor Victoria Woodards in a video statement late Thursday night. “I am demanding tonight that the Pierce County sheriff review and confirm every action taken by each officer. I demand that the sheriff provide details of the actions of each officer on the scene, and I am directing the city manager to fire each officer involved.”

Manuel Ellis died in handcuffs while being restrained on the ground by police after officers reported seeing him try to get into occupied vehicles on March 3, according to a statement from the city’s police department.

The Pierce County Medical Examiner’s Office determined that Ellis was killed by respiratory arrest resulting from oxygen deprivation due to physical restraint. Other contributing factors included methamphetamine intoxication and dilated cardiomyopathy, commonly known as an enlarged heart. While the report rules Ellis’ death a homicide, it does not automatically lead to potential criminal charges.

A cellphone video of the violent arrest emerged late Thursday night and shows police officers punching and aggressively restraining Ellis. At one point, the officers are seen on top of him, telling him to “just put your hands behind your back.”

Woodards said that the video only confirmed what the medical examiner’s report already showed.

“Tonight, [the family] asked, ‘Why does it always take a video for the public to believe when a black person’s life is taken unjustly?’ As an African American woman, I didn’t need a video to believe,” Woodards said. “As I watched that video, I became even more enraged and angered and disappointed.”

These developments come at a time of national outcry and massive protests sparked by the death of George Floyd after a white police officer in Minneapolis knelt on his neck for nearly nine minutes. Ellis’ death has become another talking point in the national conversation about the treatment of African Americans by police.

“In the face of long-standing racism and recent national events, we are devastated to have the death of Manuel Ellis become a part of this national conversation,” Woodards said at a news conference Wednesday.

Ellis and Floyd died in police custody under similar circumstances; both were heard saying, “I can’t breathe,” before their deaths.

There have been protests this week in Tacoma against police brutality and racial inequality, and for justice for Ellis, Floyd and other African Americans who have been killed by police.

Burbank and Collins are white, Ford is black and Rankine is Asian. All four men have been placed on administrative leave, Tacoma Police Chief Don Ramsdell said in a news release.