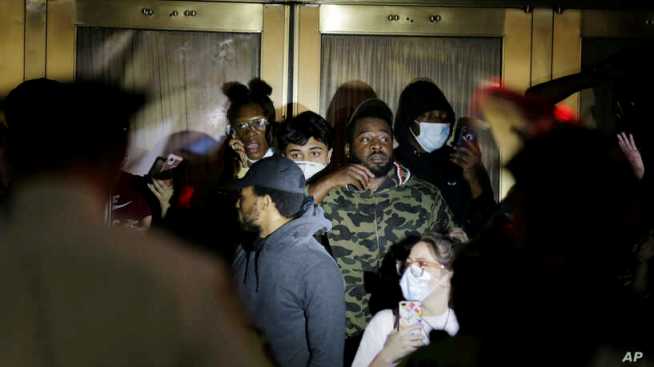 Anger over the death in police custody of George Floyd in Minneapolis, Minnesota, has exceeded fear of COVID-19 infection, as thousands have crowded into city streets across the country to protest.

But public health officials are worried that these demonstrations may have given the coronavirus that causes COVID-19 the upper hand.

More than 100,000 people in the United States have died of the disease so far.

People in close proximity transmit the virus through droplets they release when they breathe, talk, cough and sneeze.

For months, officials have canceled concerts, theater performances and large gatherings of all kinds to avoid creating conditions that spread the coronavirus.

Some states and cities have been slowly reopening, as the number of new cases has seen a slow decline overall despite pockets were the number of cases is increasing.

While many expressed empathy for the protesters’ anger, officials say the past several days of crowds have been just what they have been trying to avoid.

The New York City health department’s official Twitter account posted tips for protesters to lower their risk of spreading the virus, including wearing face coverings, staying 6 feet from other groups, and not yelling.

Many protesters came out, despite the risks.

“George Floyd was killed like an animal. And we’re tired. This is the norm. This is not something that’s new,” demonstrator Diedre O’Brien told VOA from behind a mask during a protest outside the White House this weekend.

Studies show that African Americans are roughly three times as likely to die in a police encounter as white people.

As an African American woman with asthma, O’Brien added, “I am definitely in the reach of COVID, which has been killing black people at a disproportionate rate, as well.”

African Americans make up roughly a quarter of COVID-19 deaths but only 13% of the U.S. population, according to The COVID Tracking Project.

While “there’s no doubt in my mind” that large demonstrations “can become breeding grounds for this virus,” Harvard University epidemiologist Michael Mina said, “the one benefit is that they tend to be outside,” where virus transmission seems to be lower.

Many demonstrators are keeping some distance apart, which is helpful, and wearing masks, which offer some protection.

“Will they be sufficient to stop any transmission? Probably not,” Mina said. Standing next to a highly infectious person for a long period of time will still put someone at risk.

On the plus side, testing capacity is better than it was at the beginning of the outbreak, Mina said.

“I think (virus) spread that occurs within groups of protesters probably will not overwhelm the laboratory system at this point,” at least in larger cities, he said.

When someone tests positive for coronavirus infection, health officials try to track down everyone they have been in contact with recently. That is going to be extremely difficult if they attended a protest with thousands of people, he added.

If infections do spike, Mina noted, it may be hard to pin it on the protests. Many businesses are reopening at the same time, and people are moving around more than they have in months.

“It’s another one of these things that we have to balance as a society,” he said — disease prevention against economic damage. Or “in this case, balancing freedom of speech and freedom to protest against the epidemic” and public health.