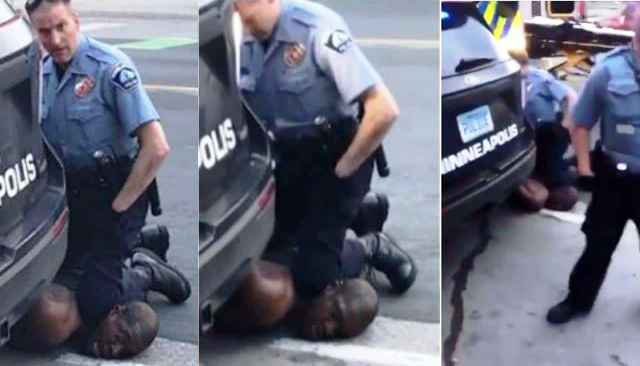 WASHINGTON – Fires raged in Minneapolis Thursday night and protests broke out in major cities across the United States as the videotaped death of George Floyd while in police custody became the latest example of how ubiquitous phone cameras and social media have combined to become a powerful mechanism of accountability for alleged mistreatment of minorities by both police and private citizens.

The Minneapolis Police Department originally had put out a press release saying that Floyd, a 46-year-old African American who died Monday afternoon, had experienced a “medical incident during [a] police interaction.”

But a video captured by a bystander showed Floyd face down in the street in handcuffs, begging to be allowed to breathe as a Minneapolis police officer knelt on his neck for nearly nine minutes.

After the video went viral on social media, the four officers on the scene, including the one pressing Floyd to the ground, were fired Tuesday. Investigations have been launched, including one by the FBI, that could lead to criminal charges against them.

Local and national activists and friends of Floyd said they believe the existence of the videotape is the only reason why the police officers are being held accountable for his killing.

Andra Gillespie, director of the James Weldon Johnson Institute for the Study of Race and Difference at Emory University in Atlanta, said, “You know, the fact that that video is so visceral and because it shows kind of the sustained subduing of George Floyd in a deadly way for so long, I think it didn’t give the Minneapolis Police Department any choice. But to fire the officers who were involved in the case isn’t enough. I think the larger question will be will criminal charges be brought against all of the officers?”

The Floyd case had disturbing echoes of the death of Eric Garner in 2014. Garner, an African American man, was choked to death by a New York City police officer after being arrested for selling loose cigarettes. Garner, like Floyd, was captured on video begging to be allowed to breathe moments before he lost consciousness and died.

Floyd died on the same day that another viral video sparked anger for the racist overtones of an interaction between a black man and a white woman in New York City’s Central Park. Christian Cooper, an avid birdwatcher, asked Amy Cooper (no relation) to leash her dog in an area of the park where dogs are not allowed to roam free. In a video taken by Mr. Cooper, Ms. Cooper responded by approaching him and threatening to call the police.

When the video exploded onto social media, it immediately sparked fury, particularly from members of the African-American community, who pointed out there is a long history of violence against black men—judicial and extrajudicial—being sparked by false allegations made by white women.

Ms. Cooper was publicly identified, and fired from her job.

The Floyd and Cooper videos appeared while another wound in U.S. race relations continued to fester. In February, 25-year-old Ahmaud Arbery was shot to death on a rural road in southern Georgia where he had been jogging. No charges were filed in the case after one of two men involved in the shooting, a former local police officer named Gregory McMichael, claimed he had suspected Arbery of burglary and that the shooting had taken place in a struggle over a shotgun.

Months later, a video surfaced showing McMichael and his son, Travis, chasing Arbery down the road in a pickup truck with at least one weapon drawn, and pulling in front of him to block his path. Arbery did struggle for the shotgun, but only after one of his pursuers exited the truck and approached him with the weapon.

Prior to the release of the video, Arbery’s family had watched in fury as prosecutors refused to file charges against the McMichaels, saying they had acted in self-defense. After the video became public, the McMichaels were charged with murder and aggravated assault, a result that many believed would not have come about except for the video.

“Racism is still alive and well in the United States,” she continued. “And unfortunately, these incidents remind us of how it is still operating in American society. And it should call us to cry out for justice and to look at that now.”

While the prevalence of video cameras has made evidence of the mistreatment of minorities by both the police and civilians more likely to come to light, there are other side effects to the virality of such recordings. Tiffany Cofield, a close friend of Floyd’s, said it was simply too painful for her to watch the video of his death. But at the same time, it has been so ubiquitous on social media that she keeps coming across it whether she wants to or not.

“I can’t put myself through that trauma,” she said of watching her friend’s last moments. “I think it would be a detrimental setback to my mental and emotional stability to see him like that. You know, I’ve known him for a while and I’ve always known him as a joyous, vibrant, you know, active, fun loving laughing dancing individual. And so I don’t even want to see that. It’s hard enough for me to process that he’s not here. So it’s even more difficult for me to process that it’s another black man’s life that was taken by the police. So I can’t watch it.”

Additionally, the widespread attention also forces national political figures in the U.S., who might otherwise have taken no position on local law enforcement matters, to weigh in. That includes President Trump, who on Wednesday used Twitter to express sympathy for Floyd’s family and friends and to announce that the FBI was investigating the matter.

On Friday morning, Trump addressed the protests in Minneapolis, which had escalated to violence and looting, tweeting, “I can’t stand back & watch this happen to a great American City, Minneapolis. A total lack of leadership. Either the very weak Radical Left Mayor, Jacob Frey, get his act together and bring the City under control, or I will send in the National Guard & get the job done right. These THUGS are dishonoring the memory of George Floyd, and I won’t let that happen. Just spoke to Governor Tim Walz and told him that the Military is with him all the way. Any difficulty and we will assume control but, when the looting starts, the shooting starts. Thank you!”

It was unclear whether Trump was aware the phrase “When the looting starts, the shooting starts,” was coined by former Miami Police Chief Walter Headley, whose aggressive policies in the 1960s were denounced by civil liberties advocates. Headley famously said, “We don’t mind being accused of police brutality. They haven’t seen anything yet.”

Twitter placed a warning label on Trump’s tweet, saying that it violated the platform’s rules against glorifying violence.