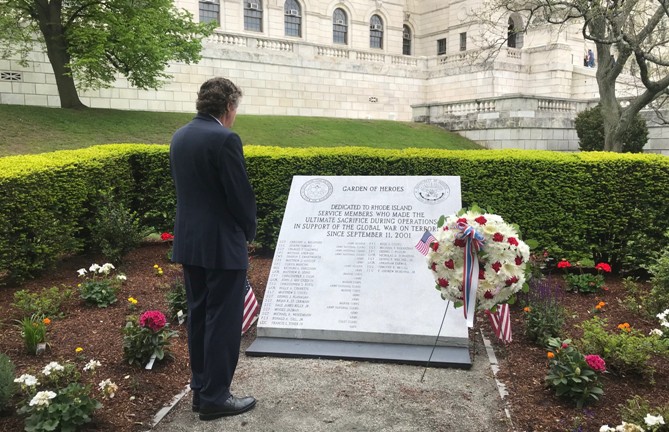 PROVIDENCE, RI—Lt. Governor Daniel McKee was joined today by Governor Gina Raimondo and other state and military officials to honor Rhode Island’s fallen soldiers during a virtual wreath-laying ceremony in the Garden of Heroes. The garden, located on the southwest lawn of the State House, pays tribute to Rhode Island service members who have made the ultimate sacrifice for our country since September 11, 2001.

Due to the COVID-19 pandemic and to protect the well-being of veterans, military families and others who would normally participate, the ceremony was conducted without an audience.

Families of the fallen and all Rhode Islanders are encouraged to watch the ceremony, which will be broadcast on Capitol TV and streamed on the Lt. Governor’s Facebook page. The Capitol TV broadcasts will begin on the day the ceremony is normally held and will replay through Memorial Day Weekend:

“While this Memorial Day will look a little different as we practice social distancing to keep Rhode Islanders safe, our state will continue to find ways to pay tribute to the courageous men and women who gave their lives to defend our nation,” said Lt. Governor McKee. “To the families and friends of Rhode Island’s fallen heroes who will be watching the wreath-laying ceremony at home: Our hearts are with you this Memorial Day, and we look forward to when we can be together again to honor the memory of your loved ones.”

The Groden Center Greenhouse in Providence donated plants and flowers for the ceremony.

The Garden of Heroes was established through legislation introduced at the request of former Lt. Governor Charles J. Fogarty. The Office of the Lieutenant Governor oversees the continued care of the garden and hosts the wreath-laying ceremony ahead of Memorial Day each year.