Trump Vows to Restore US Economy Battered by COVID 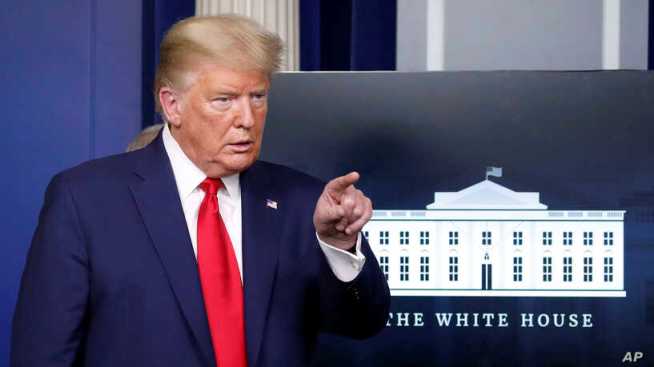 “Two months ago, we had the greatest economy in the world,” Trump said. “We’re going to do it again. And it’s going to happen pretty fast.”

He said some Americans “are going back to work, safely. We’re opening up our country again. The whole world is excited watching us because we’re leading the world.”

At the moment, however, the U.S. has totaled more than 69,000 coronavirus deaths, substantially more than any other country, with a projected total of more than 134,000 deaths by early August. More than 30 million U.S. workers have been furloughed from their jobs, with the list of the unemployed growing by millions a week over the last month and a half.

Trump said the August projection of coronavirus fatalities would occur without mitigation against the pandemic in the U.S. But numerous U.S. governors, with Trump’s encouragement, are starting to permit businesses to reopen.

“If I see something wrong, we will stop it,” Trump said of the possibility of a too-fast restart of U.S. commerce.

White House Press Secretary Kayleigh McEnany said the nearly doubled death toll projected by August “is based on faulty assumptions and is in no way representative of any federal government projections.”

She said the report by Johns Hopkins University “should not be taken as a forecast. This ‘study’ considered zero mitigation, meaning it was conducted as though no federal guidelines were in place, no contract tracing, no expansion of testing, while removing all shelter-in-place protocols laid out in the phased approach of the Opening Up America Again guidelines for individuals with co-morbidities. The media should be more responsible in its reporting and give the full set of information to the American public.”

Trump said of the worldwide contagion, “What happened should never have happened. China should have informed us if they had a problem. We want to find out what happened, so it never happens again.”

Trump spoke outside the White House as he headed on his first cross-country trip in two months to visit the Honeywell International manufacturing plant in Phoenix, Arizona, that makes masks that millions of Americans are wearing to protect themselves from the virus.

Trump’s trip came as some lawmakers have returned to Washington to begin investigations of the administration’s response to the pandemic.

The White House on Monday also took issue with a Centers for Disease Control and Prevention report that forecasts about 200,000 new coronavirus cases each day by the end of May, up from 25,000 cases now.

The information is based on government modeling pulled together in chart form by the Federal Emergency Management Agency and published by The New York Times.

White House spokesman Judd Deere said it is not a “White House document, nor has it been presented to the Coronavirus Task Force or gone through interagency vetting. This data is not reflective of any of the modeling done by the task force or data that the task force has analyzed.”

The spokesman said, “The health of the American people remains President Trump’s top priority, and that will continue as we monitor the efforts by states to ease restrictions.”

The government report said the number of coronavirus fatalities could reach 3,000 a day in four weeks, up sharply from the current figure of about 1,750, according to the Times.

A separate coronavirus model, which has previously been used by the White House, also significantly increased its projections Monday for U.S. coronavirus deaths through August.

The Institute of Health Metrics and Evaluation at the University of Washington’s School of Medicine predicted more than 134,000 people would die in the United States through August, an increase from its prediction last week of about 72,000 deaths in that same time period.

Researchers said the increased projections are based in part on the fact that social distancing policies are being eased around the country.