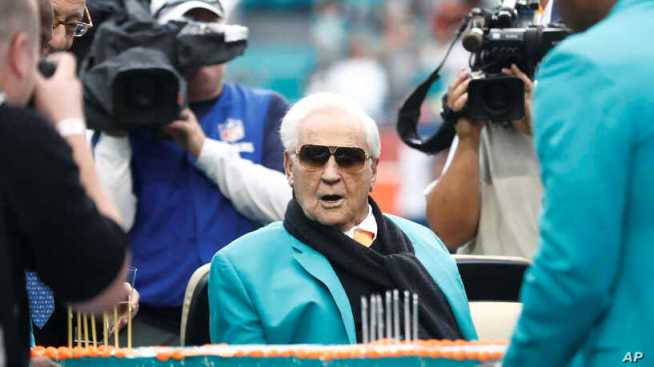 The winningest coach in U.S. National Football League history, Don Shula, has died at the age of 90.

His former franchise, the Miami Dolphins announced his death from their official Twitter account Monday, saying he died peacefully at his home in Miami. Their statement went to say “Don Shula was the patriarch of the Miami Dolphins for 50 years, He brought the winning edge to our franchise and put the Dolphins and the city of Miami on the national sports scene.”

Shula played college football at John Carroll University in Ohio and was drafted to play in the NFL in 1951. Shula played defensive back for the Cleveland Browns, the Baltimore Colts, and Washington Redskins through 1957.

He became a coach in the NFL in 1960, when he was hired as the defensive coordinator for the Detroit Lions. Three seasons later, the Colts hired Shula to serve as head coach – at 33, the youngest head coach in league history at the time.

After the 1969 season, Shula signed to coach the Dolphins and quickly turned them into a dominant team. Miami went to the Super Bowl to cap the 1971 season, where they lost to the Dallas Cowboys. After that the team won Super Bowls in the next two seasons.  This included NFL’s only undefeated (17-0) season in 1972.

The Hall of Famer remained the head coach in Miami through 1995, winning the coach of the year award four times. Shula finished with 328 regular-season wins and 19 playoff victories. His regular-season winning percentage translates to a victory rate of more than two out of every three games played.