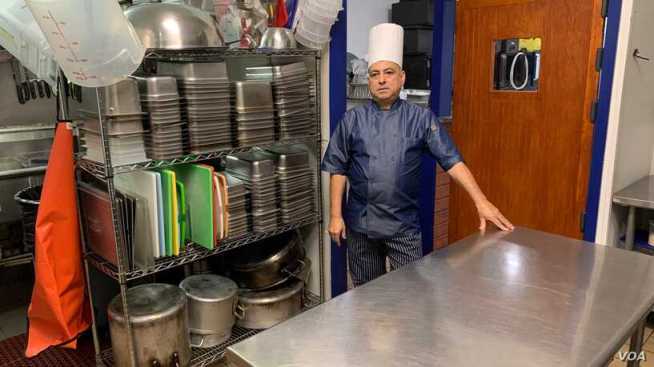 Chef Benjamin Velasquez closed his kitchen March 13, 2020 and laid off 10 workers when non-essential businesses were ordered to shut down to stop the spread of the coronavirus.

As America confronts staggering job losses and weathers a screeching halt in many sectors of the economy, small businesses with limited cash reserves are teetering on the edge of financial ruin during the COVID-19 pandemic.

The problem extends to the nation’s capital, where Benjamin Velazquez spent hours filling out online applications for government loans to provide a financial lifeline for his family-run catering company that saw business dry up when much of America went on lockdown. With each passing day, he grows more desperate for the funds to arrive.

“It’s been a difficult time for my 15-year-old business,” Velazquez told VOA. “We are looking for a $22,000 loan now. It will allow me to bring back all my employees and keep my business going when things open again.”

Catering by Benjamin is one of millions of American small businesses at risk of going under. The U.S. Congress has approved two federal aid packages totaling more than $600 billion to help small businesses, but many owners, including Velazquez, have yet to see a dime.

Nearly half of America’s private sector workforce is employed by small businesses. Under the Paycheck Protection Program (PPP), the federal government is offering companies with fewer than 500 workers forgivable loans of up to $10 million in order to retain workers idled during the pandemic. The Small Business Administration, a federal agency, backs the loans but owners must apply through participating banks or other community lenders.

Velazquez closed his kitchen March 13, sending off the last meals to Washington-area schools and day care centers. He laid off 10 workers when non-essential businesses were ordered to shut down to stop the spread of the coronavirus.

“I need $6,000 a week for employee salaries and food. I have confidence in the SBA, but they are overwhelmed with loan requests.” Velazquez said. “I know other small business owners who are waiting and trying to work with banks to get the money.”

Velazquez isn’t alone, as businesses have shuttered nationwide. In New Orleans, Louisiana, thousands of restaurant workers have been let go or furloughed since March.

“We need help quickly,” Melvin Rodrigue, who operates Galatoire’s, a century-old restaurant in the city’s French Quarter, told Reuters, noting that he has laid off nearly half of his 160 employees. “We’re not quite there yet in getting the assistance.”

The Small Business Administration acknowledges delays in processing a torrent of loan applications, but it estimates more than 1.6 million small businesses were helped by the program’s first round of funding, supporting more than 30 million jobs.

At the same time, some large companies also have received millions of dollars in payments intended for smaller firms.  The national restaurant chain Ruth’s Chris Steak House took a $20 million PPP loan. The company returned the money after public criticism.

Treasury Secretary Steven Mnuchin said it was “outrageous” that the Los Angeles Lakers basketball franchise — worth billions of dollars — took $4.6 million in loan money. The Lakers also returned the money. Mnuchin said the government will perform a full audit on any company taking out more than $2 million under the small business loan program.

A survey of 1,700 small businesses by the investment firm Goldman Sachs found 91% applied for government loans but only 29 percent have received funding. It also found the average number of workers per firm dropped from 11 to six, a 45 percent reduction.

Analysts say the economic shutdown has disproportionately affected small African American-owned companies, 26% of which said they have less than one month of cash reserves, according to a recent survey.

“This is a crisis for the black community because [minority-owned] businesses are having problems accessing the loan money compared to other companies,” said Margaret Anadu of Goldman Sachs Urban Investment Group. “The good news from our survey is that small, black-owned businesses that were approved for the government loan program expressed confidence about their company’s ability to survive and retain their employees.”

“The SBA said to please be patient through this loan process. I’m just glad there are available funding resources to help small minority businesses.  The only thing I can do is wait,” he said.