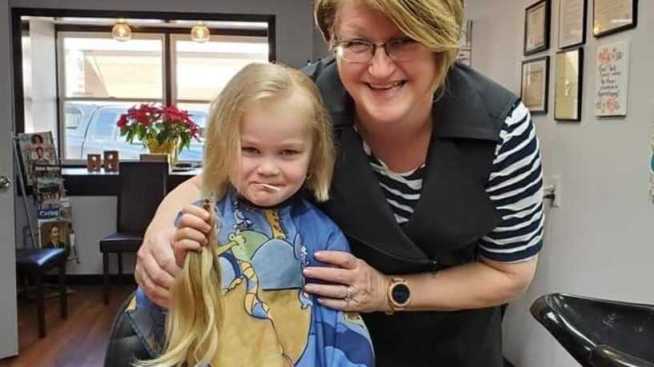 Editor’s Note: This is one in a series of profiles of Americans struggling with the economic impact caused by the coronavirus pandemic.

Joyce Rydstrom of Alta, Iowa, had to shut the doors to her hair salon last month when the governor ordered a suspension of nonessential businesses to slow the spread of the coronavirus pandemic.

Meanwhile, the meatpacking industry, a major driver of the Iowa economy, has suffered repeated blows as virus outbreaks have caused processing plants that usually operate around the clock to shut down for days at a time. The economy, both personal and statewide, seems anything but stable these days.

Rydstrom has done hair for 36 years. She used to see 10 to 12 clients a day. Now, she joked, “I’m just seeing days.” While her husband, Dave, is able to continue growing his crops of corn, soybeans, hay and oats, she has been home with time on her hands. This week she planted her first vegetable garden.

“Normally when I’m at the salon, I come home after a whole day and I’m pooped. I don’t want to go out and garden,” she said. But now, she added, “because I’m home, I thought, ‘Let’s just go for it.’”

In many ways, Rydstrom and her family are lucky. Her husband has been able to work on his farm despite the shutdown. Her son’s and daughter’s families, with four kids each, live nearby. They still have income and have received their government stimulus checks. Her parents, who live in a neighboring county, are in good health.

For their community, however, much depends on the continued operation of the Tyson Foods pork-processing plant in the county seat, Storm Lake. The pork industry has suffered twin blows: with restaurants closed, there’s a surplus of pork on the market, depressing the price; and pork processing plants have seen one closure after another after viral outbreaks among employees. The latest was Wednesday: a Tyson Foods plant in the city of Waterloo, about 250 kilometers east of Alta.

Local news reports say some hog farmers are killing their pigs because they have nowhere to sell them and no room to keep them.

Rydstrom worries about what will happen if the Tyson plant in Storm Lake – a hog slaughterhouse, meat packing plant and turkey processing plant – has to close.

If it shuts down, she said, “that would devastate the majority of Buena Vista County.” She said a friend who works at the plant says employees are being “above and beyond cautious” to keep themselves safe and healthy.

Amid the uncertainty, Rydstrom said she misses the normal things she used to take for granted. Handshakes, for example. A friendly touch.

“People need physical touch,” she said. She is mindful of her older clients who have lost spouses. “They’re living by themselves, a lot of these widow ladies, they want somebody to put their hand on their shoulder or even just give them a little extra brushing with their hair,” she said.

While she’s had time off, she’s been trying to connect with long-term clients on the telephone.

“I’ve been trying to keep in touch with them as best I can and let them know I’m thinking about them and holding a spot for them in my appointment book when the time comes,” she said.

But Rydstrom’s business funds are running low. A neighbor and regular customer recently said he knew she couldn’t cut his hair for him and asked if he could borrow her hair-cutting clippers. She sent him home with them. Later, he sent them back – with $20.

“I thought, there’s my income for a whole week,” she joked.

Joking aside, her emergency fund is shrinking while the salon remains closed.

“I have the internet to pay and the utilities to pay, and there’s no income,” she said. She has applied every week for unemployment, which, thanks to federal funds, has been expanded to include the self-employed but has not received a response yet. And the federal stimulus money hasn’t come. She said by the time she’s able to get back to work, her “little cushion” of reserve funding will be used up.

“When I go back to work, I will be starting at ground zero,” she said in an email. “I will have to build up my bank account again.”

Yet, she added, “I am not going to lose sleep over it. I feel God gave me the salon years ago, and he is going to help me once again to work again where he wants me. It won’t come overnight, but I am confident that I will be OK.”