US Lawmakers Weigh Yet Another Massive Coronavirus Aid Bill 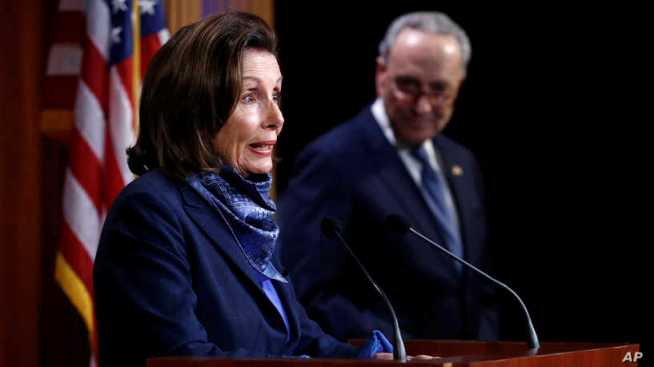 WASHINGTON – The U.S. Congress is set to pass a $484 billion interim aid bill Thursday, providing stop-gap funding for the $2 trillion CARES Act, the largest relief package in U.S. history. But even six weeks of record spending from the U.S. government has not been enough to contain the damage the coronavirus pandemic has inflicted on the nation’s economy and public health sector.

The COVID-19 emergency lockdown has forced millions of Americans into applying for unemployment or waiting in line at food banks, while small business owners question whether they’ll ever reopen their doors. Here’s an overview of what U.S. lawmakers say is needed in the next major aid package intended to restart the economy.

Before lawmakers had even passed the bill they are referring to as COVID 3, the to-do list for COVID 4 was growing.

“COVID 4 will be much more along the lines of COVID 2, big, bold, robust, with new things in it,” Senate Minority Leader Chuck Schumer said Tuesday. “It’s going to have a lot of stuff, but I want to mention a few of the priorities that I have: Election reform, money for housing; there’s three months of rent forbearance but what do people do after that? The postal service, money for a heroes fund, people who are on the front lines, they should get extra money, and at the top of the list is a big, robust state and local plan.”

U.S. President Donald Trump has also already begun outlining his wish list for the proposal, tweeting, “We will begin discussions on the next Legislative Initiative with fiscal relief to State/Local Governments for lost revenues from COVID 19, much needed Infrastructure Investments for Bridges, Tunnels, Broadband, Tax Incentives for Restaurants, Entertainment, Sports, and Payroll Tax Cuts to increase Economic Growth.”

The broad outlines of that plan have bipartisan support. Many of the initiatives outlined in Trump’s tweet were floated by House Speaker Nancy Pelosi in press calls earlier this month. Pelosi called for fixes to underlying problems brought into focus by the crisis, including the need to fix the nation’s crumbling roads and bridges and development of rural broadband technology.

Aid for state and local governments

But the most immediate need will be one that congressional Democrats tried – and failed – to address in the recent stop-gap measure: aid to state and local governments.

New York Governor Andrew Cuomo, who has dealt with having the epicenter of the coronavirus crisis in New York city, said funding for state and local governments is a difficult pitch to lawmakers.

“When they can do funding, where they can go hand it out to individuals and call them up and say, ‘I got you money, here it is that is more politically appealing.’ You give funding to a state, who do you call to say thanks, who even knows? Nobody. It’s just giving money to another government,” Cuomo said Tuesday.

House Majority Leader Steny Hoyer told reporters Tuesday that this aid would be “a very, very high priority item” this time around, adding, “We don’t want to see any critical personnel laid off because the states run out of resources, and local governments run out of resources.”

This funding – which Democratic lawmakers are referring to as the heroes bill or heroes fund – would aid essential personnel that include medical workers and local police and fire departments. A proposal floated by Senate Democrats earlier this month would also provide a $25,000 premium pay increase for those essential workers as well as a $15,000 recruitment incentive for jobs in essential services.

“The public very much cares about the health and well-being of our heroes: our health care workers and first responders, who risk their lives to save other people’s lives and now could lose their jobs,” House Speaker Nancy Pelosi said Tuesday.

A $500 billion bipartisan proposal put forward by Republican Senator Bill Cassidy and Democratic Senator Bob Menendez is modeled on the requests from the National Governors’ Association and could be used to meet the current demand for essential services. The two senators say their proposal would also help “communities transition toward reopening by expanding testing and contact tracing, providing additional resources to residents, local hospitals, small businesses and schools.”

Essential workers would not be the only Americans to receive aid under this next round of proposals. Many lawmakers have also noted that the round of direct stimulus payments to most lower- and middle-class Americans will not be enough to get the economy up and running again.

“Does anyone truly think that a one-time $1,200 stimulus check is enough when 22 million Americans lost their jobs and we are nowhere near the economy being back to normal?” Democratic Representative Ro Khanna tweeted on April 18. Khanna said his proposal, co-sponsored with Democratic Rep. Tim Ryan, would give $2,000 “to those who need our help the most.”

Majority Leader Hoyer told reporters Tuesday the unemployment benefits addressing the 22 million Americans who have lost their jobs in just the last month may also have to be extended. He said nutritional assistance would be key in helping many out-of-work Americans.

“They’re very concerning to us in terms of people who are trying to get food assistance at food banks and soup kitchens and other facilities. We’re trying to keep people afloat from the standpoint of having something to eat,” Hoyer added.

All of these initiatives would add to the unprecedented amount of money already spent by the U.S. government to contain the pandemic. Since March, U.S. lawmakers have passed four major pieces of legislation running into the trillions of dollars.

Senate Majority Leader Mitch McConnell has cautioned against unrestrained spending to contain the economic damage, noting the two latest spending packages have been approved through fast-track procedures with only a handful of lawmakers actually in Washington for the passage.

“We ought to bring everybody back, have full participation, begin to think about the implications for this country’s future for this level of national debt; begin to see some evidence of the economy beginning to get back to normal, hopefully in states that are less impacted,” McConnell warned Tuesday.