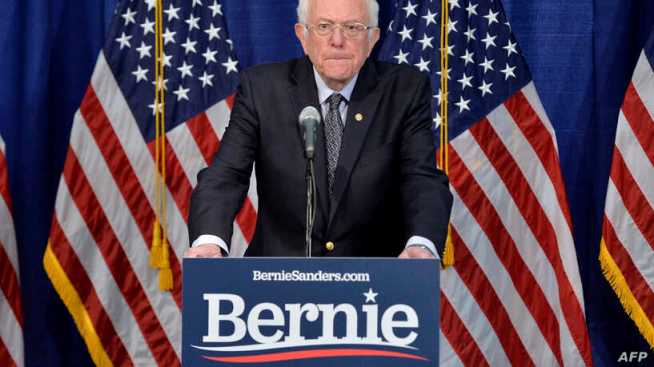 The sudden certainty emerged Wednesday as Vermont Sen. Bernie Sanders, a self-described democratic socialist, suspended his campaign for the Democratic presidential nomination. He faced dwindling odds against Biden, who is making his third run for the presidency over three decades.

Speaking from his home in the northeastern U.S., Sanders called Biden “a very decent man” and said he would work with him on “progressive ideals.”

Sanders said that while he was suspending his active campaign, he would remain on the ballot in states that have yet to stage Democratic presidential primary elections.

Sanders hopes the decision to stay on the ballot will help him win more pledged delegates to the party’s national convention in August, which would give him a voice in the writing of the party’s policy platform.

Sanders has championed a government takeover of health care in the U.S., which Biden opposes, and other spending that would greatly expand the welfare state in the country, like that seen in Scandinavia.

After the convention, Sanders said he would work with Biden to defeat Trump, whom Sanders called “the most dangerous president in modern American history.”

At the moment, however, the U.S. presidential campaign has all but disappeared from the consciousness of Americans who are uniformly focused on trying to avoid the deadly coronavirus and worried about the fate of their jobs as the pandemic wreaks mayhem on the U.S. economy.

Biden had already commanded a near insurmountable lead over Sanders in pledged delegates before the worst of the coronavirus attack arrived in the U.S.

Biden and Sanders were pitted against each other in Tuesday’s primary in Wisconsin, where hundreds of normal polling stations were closed for lack of Election Day workers attributed to exposure fears and stay-at-home orders.

The result of the voting will not be announced until next week, but pre-election polling showed Biden with a commanding lead over Sanders in Wisconsin. U.S. political analysts suggested ahead of the vote that it would be Sanders’s last official contest against Biden, which turned out to be the case.

The Nov. 3 election now pits two septuagenarians against each other — Trump, 73, and Biden, 77 — even as much younger candidates vied with Biden and lost. Trump’s renomination by Republicans for a second term has never been in doubt.

The two candidates will present voters with a sharp contrast.

During his time in the White House, Trump has advanced an agenda of disrupting official life in Washington, attempting to “drain the swamp,” as he often says.

He has advanced conservative policies and appointed dozens of conservative judges to lifetime appointments that will shape the country’s legal framework for decades.

He embraced cuts in government spending until recently when the coronavirus pandemic led to an abrupt about-face, as he wholeheartedly supported a $2 trillion rescue package, with more spending to save the U.S. economy, the world’s largest, in the immediate offing.

Biden, who served for eight years as former President Barack Obama’s second-in-command from 2009 to 2017, espouses left-of-center political views, more agreeable for government assistance for the less well-off than Trump has proven to be.

Biden has called for improvements in the national health care plan adopted in 2010, popularly known as Obamacare, but not its demise as Trump has sought, or its replacement with a government plan like Sanders advanced.

Biden has said he will name a woman as his running mate, the third such time that has occurred in U.S. political history.

Trump and Biden have had little contact over the years, but they talked for 15 minutes on Monday about the country’s response to the coronavirus crisis.

While no debates between the two have been set, U.S. presidential contenders have typically held three face-to-face encounters in recent campaigns, and their vice-presidential running mates, one.