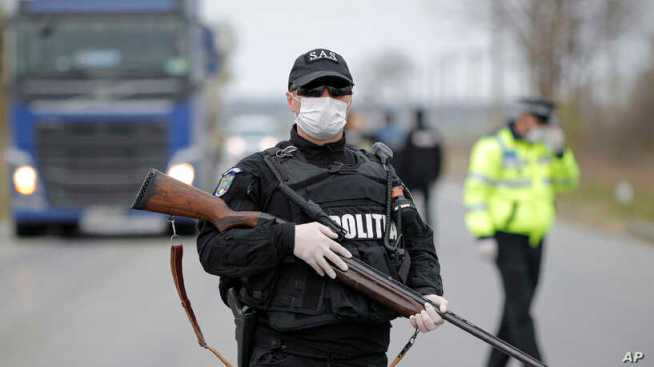 Outside wartime nothing like it as ever been seen before in modern Western history. The lockdowns by democratic states with their draconian constraints on civil liberties and private enterprise fly in the face of an historical progression that’s seen the size and roles of governments shrunk and individual liberty boosted.

As governments mobilize resources and coerce people in a life-and-death struggle to contain the coronavirus and mitigate its impact, the state has been unbound.

People have been confined indoors, police powers have been expanded, data-surveillance increased and businesses shuttered.  All with little debate.

The size and scope of the state’s role in the economy prompted by the coronavirus dwarfs anything mounted to handle the 2008 financial crash. Britain, France and other European countries have offered so far loans and subsidies worth around 15% of their GDPs. America’s stimulus package is at around 10% of GDP.

In France, President Emmanuel Macron’s government not only passed legislation giving it the legal right to control the movement of people, it also seized the power to manage prices and requisition goods. In the United States, President Trump has used the Defense Production Act to prevent the export of surgical masks and gloves.

State power is now at its most intrusive since the Second World War. For die-hard advocates of free markets and limited government the abrupt change in direction is horrifying. For others it is less so, even something to be embraced, a harbinger of the future, a turning point that will end up re-reordering their countries.

For those on the progressive left, the reemergence of state power is a vindication of long-held beliefs that market-based models for social organization fail the majority of people. They hope the crisis will provide the opportunity to refashion along less market-oriented and more socialist lines. In the United States, supporters of Bernie Sanders say the crisis has exposed for all to see America’s threadbare social-safety net and the need for a government-run single-payer health care system.

Last week, Britain’s former Labour leader, Jeremy Corbyn, said that the government’s massive and unprecedented underwriting of the British economy and labor market vindicated his pre-coronavirus election manifesto, the most left-wing program ever presented by the modern Labour Party.

On Europe’s far right, too, there is self-preening as well as hope that the eventual political outcome from the coronavirus will be along lines more to their liking. A future of strong nation states and powerful central governments far less hedged in by Brussels is what they hope the coronavirus will lead to.

Europe’s nationalist populists have long demanded more border controls and have advocated for a break with the Schengen system of passport-free travel. They hope the imposition of temporary border controls, in the face of the disapproval of Brussels, will lead to the break-up of Schengen permanently. Luca Zaia, governor of Italy’s hard-hit Veneto region and a member of Matteo Salvini’s populist Lega party, told reporters last month that “Schengen no longer exists” and forecast, “it will be remembered only in the history books.”

Some are not waiting for history to reward them.

Hungary’s firebrand populist Viktor Orbán, a proponent of what he dubs ‘illiberal democracy,’ has seized the moment to accrue more power. Since his reelection in 2010 civil libertarians have denounced him for initiating a concerted erosion of democratic checks and balances, including the curbing of judicial independence, the politicization of the civil service and state interference in media and civil society.

Last week, the country’s parliament, which is controlled by his right-wing nationalist party, gave Orbán the power to rule by decree indefinitely, shrugging off opposition demands for at least an end-date to his one-man-rule in the heart of the European Union. “The Hungarian situation offers us a glimpse of how world politics may function during and after the coronavirus crisis unless we give it careful thought,” frets Umut Korkut, a politics professor at Scotland’s Glasgow Caledonian University.

Tom Palmer, a vice president at the Atlas Network, a non-profit which advocates for free-market economic policies and limited government, agrees. The Hungarian example — as well as the unbinding of the state elsewhere in the West — prompts his alarm. “There is a rising tide of authoritarian statism coming,” he says.

But some governments appear just to be trying to manage public fear with no aim to prolong intrusive power. Others are exploiting it. In many cases established democracies are giving people enough confidence to accept restrictions in exchange for health security. Positive examples include South Korea and Israel, where the introduction of tough measures reflect a strong public consensus for action. In Britain, an opinion poll this week showed that two-thirds of the public back police enforcement of lockdown measures. Italy’s Prime Minister, Giuseppe Conte, got overwhelming public approval for his nationwide shut-down.

But the unbinding of the state does raise serious questions about government overreach and individual rights.

Other analysts and commentators remain more sanguine, pointing out that while many Western governments have taken emergency powers during this viral outbreak, no other democracy has given a leader full control as in Hungary. Faced with the prospect of tens of thousands – even hundreds of thousands – of deaths, Western governments have had little option but to expand their authority. People want governments to do whatever is needed to save lives. Once the acute phase of the pandemic is over, everything can revert to how it before, they say.

The crisis may even allow for an improvement of democracy — a renewal involving reform of hidebound bureaucracy and a reduction in red tape as well as a greater nimbleness and responsiveness by government. The fight against the Coronavirus has exposed bureaucratic inertia in the West, a leaden-footedness and a failure to act quickly enough. Critics say bureaucracies have become arthritic, adjusting too slowly to the burgeoning crisis and have been reluctant to embrace innovation and flexibility.

With the exception of Germany, many Western states have bungled virus testing and been sluggish to embrace the greatest strength of advanced democracies — their industries and manufacturers. As in Britain, so in the United States, commercial and university laboratories were blocked for weeks from developing their own tests for the virus. The government-designed testing kits rolled out at first were faulty.

Belatedly, Western governments have started to try to be more responsive and to be smarter in the securing the resources needed to fight the insidious virus, cutting back on red tape, opportunistically embracing innovation, trying to reinvent themselves while tossing aside economic orthodoxy, all for the collective good. That all might leave a lasting legacy.

But it remains unclear whether the unbound state will relinquish its expanded authority once the crisis is over. “Some will reassure themselves that it is just temporary and that it will leave almost no mark, as with Spanish flu a century ago,” the Economist magazine editorialized last month.

“However, the scale of the response makes covid-19 more like a war or the Depression. And here the record suggests that crises lead to a permanently bigger state with many more powers and responsibilities and the taxes to pay for them,” the editors noted. Governments are never good at handing back powers they have seized.

Outside of the democratic states of the West, the picture is gloomier. Dictators and strongman are using the crisis to tighten their grip on power. Many are fearful of political and social revolt triggered by scarcity, fear and an uncontrolled spread of the virus.

In Azerbaijan, Ilham Aliyev has cited the threat of the coronavirus to crack down even harder on opposition to his rule. So, too, in Cambodia, where Hun Sen has been arresting dissidents on grounds they’re spreading false information about the virus and he’s scapegoating Muslims for its emergence and introducing the contagion into the country.

“In Thailand, Cambodia, Venezuela, Bangladesh, and Turkey, governments are detaining journalists, opposition activists, healthcare workers, and anyone else who dares to criticize the official response to the coronavirus,” says Kenneth Roth, executive director of Human Rights Watch.

“For authoritarian-minded leaders, the coronavirus crisis is offering a convenient pretext to silence critics and consolidate power. Censorship in China and elsewhere has fed the pandemic, helping to turn a potentially containable threat into a global calamity. The health crisis will inevitably subside, but autocratic governments’ dangerous expansion of power may be one of the pandemic’s most enduring legacies,” he fears.

The coronavirus has given governments in the Middle East some breathing space from protest movements that have been burgeoning this year. Public demonstrations have been banned on social distancing grounds. But the Virus and food scarcity risks upending regimes.  In Beirut, protesters flouted a curfew last week chanting, “We want to eat, we want to live.” In Tripoli, the country’s second-largest city, protesters shouted: “Dying from the coronavirus is better than starving to death.”

A precipitous fall in oil prices risks destabilizing even strong central powers. With revenues plunging, Saudi Arabia’s ruling family is also at risk, say analysts. Few, though, believe another a coronavirus-sparked repeat of an Arab spring would give rise to the emergence of democracy in the region — more likely just a swap out of authoritarians.

Speaking to the French nation last month, France’s Emmanuel Macron promised his people,  “The day after we emerge victorious, will not be like the day before.” His words were meant to reassure the French that the virus would give rise to helpful reform. But they could prove prophetic in quite the opposite way for many countries.