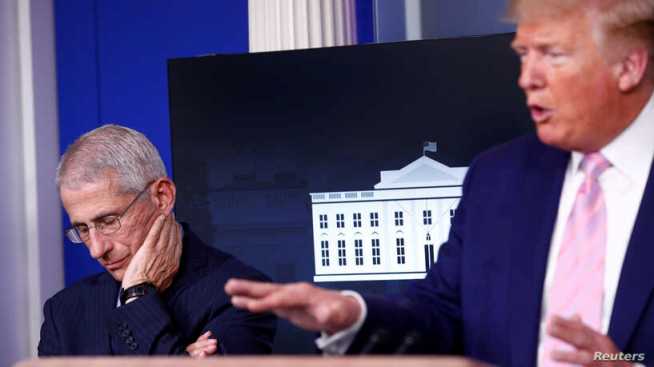 WHITE HOUSE – A national stay-at-home directive was rejected by U.S. President Donald Trump on Wednesday, but he said he might order airlines to stop flying between coronavirus hot spots.

“It’s very tough. You have them going from hot spot to hot spot,” said the president at a briefing for reporters at the White House. ”We are looking at it. Once you do that, you really are clamping down industry that is desperately in need.”

Trump said at one point during the news conference, “We do not give in to fear.”

The U.S. government is projecting that even if social distancing guidelines in effect are strictly adhered to in the weeks ahead, up to nearly a quarter of a million people in the country could die of COVID-19 infections.

The total number of confirmed coronavirus cases in the United States surged past 215,000 Wednesday, with deaths exceeding 5,000.  More than 1,300 of the total fatalities were recorded in New York City.

The governor of New York, Andrew Cuomo, said 391 people had died of the virus in the state since the previous day. He noted a projection by the Gates Foundation that the death toll would reach 16,000 in New York and 93,000 nationwide.

Cuomo expressed frustration that some people in New York City continue to ignore social distancing guidelines, and he said he wanted the city’s playgrounds shut down.

Florida, home to 21 million people, has become one of the latest states to be put under a stay-at-home order through the rest of April by its governor.  Pennsylvania, Nevada and Mississippi also issued such orders Wednesday.

Some COVID-19 hot spots in other states, such as Louisiana, another Southern state, “are really exploding,” Trump told reporters Wednesday.

Asked by VOA whether the coronavirus task force headed by Vice President Mike Pence was halting aid shipments of personal protective equipment bound for foreign countries to ensure that the U.S. was not releasing critically needed items at home, Trump said there was “no truth whatsoever” to that.

“Why would I do that?” he remarked in reply.

During the briefing, Trump did confirm news reports that the national strategic stockpile of such equipment was nearly depleted.

The briefing began with the president announcing an enhanced effort to halt drug smuggling.

The U.S. military is beginning enhanced counternarcotics operations in the east Pacific Ocean and the Caribbean Sea, which will include the deployment of more U.S. Navy and Coast Guard ships and aircraft.

There is a “growing threat” that cartels and criminals will try to take advantage of the pandemic, the president said. “We must not let that happen.”

“Corrupt actors, like the illegitimate Maduro regime in Venezuela, rely on the profits derived from the sale of narcotics to maintain their oppressive hold on power,” Defense Secretary Mark Esper said. “The Venezuelan people continue to suffer tremendously due to Maduro’s criminal control over the country.”

“We have a job and we will continue to do it: defend the United States of America,” Esper vowed.

The military was facing its own particular battle against the novel coronavirus. The Navy was struggling to quarantine crew members of an aircraft carrier, docked at the Western Pacific island territory of Guam.

Nearly 100 of the 3,000 sailors on the USS Theodore Roosevelt have tested positive for the coronavirus.

Several thousand sailors will leave the ship, while others will remain on board in order to continue to protect the Nimitz-class nuclear-powered carrier and run its critical systems, according to Navy officials.

Trump acknowledged Wednesday that he recently began taking the virus much more seriously after earlier comparing it to normal seasonal influenza.

“It’s so contagious. Nobody’s ever seen anything like this,” he responded when asked about his change of stance.

Three U.S. senators have sent a letter to the National Academies of Sciences, Engineering and Medicine, calling on the private, nonprofit institutions to serve as a trusted authority outside the executive branch for coronavirus information.
“Conflicting messages from the Trump administration have caused confusion and chaos in the national response,” said Democrats Edward Markey and Elizabeth Warren, joined by independent Bernie Sanders, in a statement.

“Although the Centers for Disease Control and Prevention and the National Institutes of Health are capable and well-qualified to help address many of these questions, we have seen the Trump administration’s willingness to stifle the ability of these agencies to communicate openly with the public,” their letter said. “The public needs a trusted authority outside of the executive branch.”