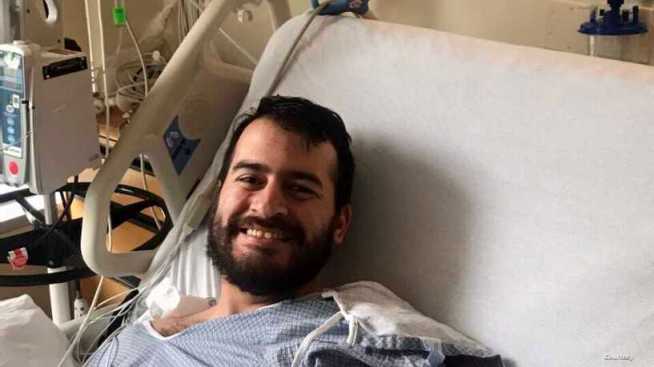 Much has been written of the warning signs, symptoms and dangers of COVID-19. But what is it like to live through an active infection? Several sufferers share their stories, day-by-day medical conditions, thoughts and observations with VOA’s Carolyn Presutti in this second installment of a bi-weekly series chronicling life with the coronavirus.

‘I’m on the medication, what I call the Trump combo’

“Twenty-two hours without fever, thank God,” says the father of two. Other COVID-19 symptoms linger, but without the fever he feels alive again.  “I have still a lot of pain in the back of my base my head here and I get an ice pick headache right there. Stomach’s a little messed up. But let me tell you – without the fever, I don’t feel like I’m dying anymore.”

Gavidia believes he, his wife, a son and daughter caught the virus while on a ski vacation in Aspen, Colorado.  They have been quarantining themselves in their Jupiter, Florida home. Carlos has been the sickest of the four. His wife, Laura, has been changing sweat-soaked bed sheets and soothing his migraines.

While most patients recover from COVID-19 on their own, Gavidia credits a combination of drugs for his sudden improvement after two weeks of misery: hydroxychloroquine, an anti-malaria and lupus drug, and Azithromycin, a common antibiotic.

Getting hydroxychloroquine was not easy, as few pharmacies had it in stock. Gavidia, a retired financial services executive, sent a private pilot to retrieve a supply from a friend in Ohio who uses the drug for a different purpose.

Gavidia’s bold move preceded Monday’s announcement by the U.S. Food and Drug administration authorizing hydroxychloroquine as an emergency COVID-19 treatment. More than a week earlier, President Donald Trump drew headlines for touting the drugs before any U.S. agency had weighed in on their efficacy or safety for coronavirus patients.

But Gavidia believes what he jokingly calls the “Trump [drug] combo” may have saved his life or at least shortened his suffering.

Giving back, without fever

Once his fever broke this week, Gavidia dispatched his pilot to Maryland to deliver the remainder of the pills to a friend who also tested positive for COVID-19.

Now on the road to recovery, Gavidia knows his blood holds something precious that could help save other COVID-19 patients.

Our next installment details the obstacles Gavidia faces as he tries to donate his blood, which contains COVID-19 antibodies. The first installment can be read here: Coronavirus Patients Share Their Trials and Tribulations‘I never knew I could be this sick and still be alive’ one patient tells VOA

Zack Armstrong labored to breathe between coughing spells.  He was enduring his worst day since he and three others were quarantined in an apartment after a roommate was rushed to the hospital and tested positive for COVID-19.  But Armstrong’s spirits soared when he heard the news. After 10 days, his hospitalized roommate, Francis Wilson, woke from a coma and was being weaned off the ventilator.

“I was freaking out, because I was thrashing, like, trying to have just anybody see and know that I was alive. And then I heard somebody say, ‘Dude, chill out.  You’re at GW [George Washington] Hospital. And I was like, ‘Oh wait, I’m alive? What?’”

Wilson’s symptoms started with a cough, followed by difficulty breathing, hot flashes and total exhaustion. His health declined further at a Virginia hospital as fluid filled his lungs, prompting his parents to call in a priest for last rites.

As hopes faded, Wilson was transferred to a hospital in the nation’s capital. There, he eventually began to recover. Nurses told him he was “one of the worst [COVID-19 cases] who pulled through [lived].”

“Just make sure to take this very, very seriously. I’ve apparently been one of the worst that’s pulled through here. So just let me tell you just be safe. Stay inside and stay safe,” he said.

Indoor games to pass the time

Meanwhile, at the quarantined apartment, Armstrong, his other roommate and their girlfriends struggle to overcome illness – and boredom. They miss simple things like taking a walk.

Friends leave food outside their apartment door. Some make a game of throwing rolls of toilet paper from the parking lot up to the apartment’s fourth floor balcony.

The four of them take pains to clean the apartment daily with bleach. Armstrong believes they have forged ”a unique bond” during their ordeal, noting that COVID-19 quarantine is far more rigorous than the voluntary decision many Americans have made to stay at home.

“As a group, you know, the four of us, I think it’s definitely given us like a unique story, a unique bond that we can share with each other that no one else really understands. I mean, I see a lot of people posting you know, on Instagram and Facebook, hashtag ‘quarantined,’” he said. “But you’re still able to take your trash out, you’re still able to, you know, take a walk down the street and come back. In my mind, that’s not a real quarantine. Like I had the hazmat guys coming in this morning to take our trash [and I] can’t even step into the hallway. That’s like a real, real quarantine.”

In our next installment, we check back with Zack. Francis learns what transpired during his coma and what he faces now.

‘Do miracles come … and should one be used on me?’

Connie Lambert is not getting better.  The 76-year-old spends her days trying to watch television to “take my mind off me.”

“My chest is a lot tighter than it’s been in the last couple days.  I feel very depressed, I can’t help it… I don’t know what to do.  I don’t know whether to keep trying,” she said.

Nearly two weeks after she took a coronavirus test, the Chicago-area resident is still waiting for the result. She wants to know whether she was contagious when she babysat her great granddaughters.

When VOA asks if the system has failed her, Lambert throws up her hands, saying it is failing a lot of people.  She does not feel strong enough to go for another test, noting she spent hours at the hospital waiting to be tested the first time.

We’ll check to see if Connie Lambert finds an express testing site in our next installment.