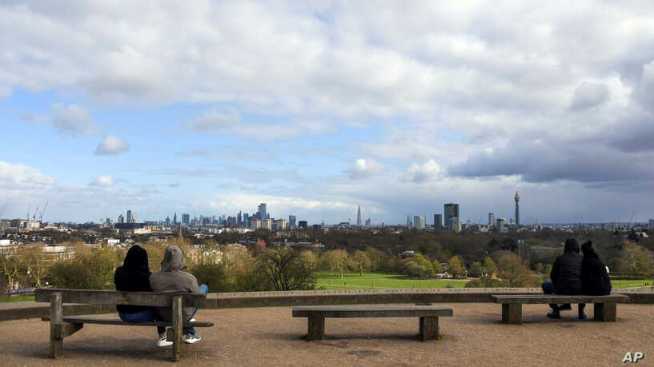 The U.S. state of New York has passed the somber milestone of 1,000 coronavirus deaths, while governments across the world instituted or extended new lockdowns to try to blunt the effects of the outbreak.

Hospitals in New York City are set to get some relief with Monday’s arrival of the Navy’s USNS Comfort hospital ship, which will clear space for coronavirus patients by taking those in need of other care.  Its sister ship, the USNS Mercy, began taking patients Sunday at the port of Long Beach, outside Los Angeles.

U.S. President Donald Trump announced U.S. guidelines on social distancing to prevent the virus from spreading would be extended from an initial Monday end date to the end of April.

The United States has the most cases worldwide.

Italy, which has by far the most deaths and has been under strict lockdown for weeks, reported more than 750 more deaths Sunday, but saw signs of hope with a slowdown in new infections.

An Italian government official told Italy’s Sky TG24 television that while everyone wants to return to life as usual, talking about such a move at this point is inappropriate, and that the lockdown measures set to expire Friday will inevitably be renewed.

Several world leaders have focused on the economic impact of the crisis, often drawing criticism amid mounting case counts and death tolls.

Brazilian President Jair Bolsonaro ran afoul of Twitter rules with several posts featuring videos in which he met with groups of people and questioned the need to shut down businesses and keep people from gathering.

Twitter said it would ban posts that go against public health recommendations and encourage ineffective prevention techniques that could increase the likelihood of people getting sick.  The social media company deleted two of Bolsonaro’s posts, saying he violated the policy.

Among new restrictions going into effect Monday are isolation orders in Moscow, where people are only allowed to leave their homes for essential jobs, shopping for food or medicine, or for a medical emergency.

Nigerian President Muhammadu Buhari announced stay-at-home orders for the country’s capital, Abuja, and its largest city, Lagos, and said that travel to and from other parts of the country should be avoided.

In Britain, where Prime Minister Boris Johnson and Prince Charles are among 22,000 confirmed COVID-19 cases, the government’s deputy chief medical officer says the lockdown there could last as long as six months, but could be eased if people do as they’re told and conditions improve.

Lockdowns are also being extended in Nepal, Slovenia and Argentina.

Worldwide, the number of confirmed coronavirus cases stood at more than 723,000 with 34,000 deaths, according to Johns Hopkins University statistics early Monday.

Victims include popular Japanese comedian Ken Shimura, whose death was reported late Sunday.  The 70-year-old was hospitalized March 20 with a fever and breathing problems.

China’s government is starting to encourage businesses to reopen as health officials keep an eye on the threat of imported cases after making vast progress in essentially eliminating locally transmitted cases.

China was the first country to report cases of the new coronavirus and put in place its own strict lockdowns, especially in the city of Wuhan, which accounted for the highest number of the more than 81,000 infections in China.

With hospitals all over the world facing an influx of patients and short supplies, U.N. Secretary-General Antonio Guterres highlighted their contributions in a late Sunday Twitter post.

“Health workers worldwide continue providing critical assistance to those affected by the COVID-19 pandemic, often through personal sacrifice.  I’m grateful for their courage, commitment and sacrifice,” he said