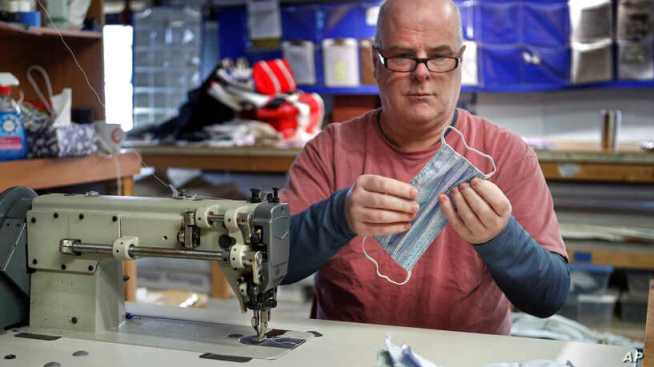 NEW YORK – On the coast of the Northeastern state of Maine, Eric Baldwin and his staff of two usually spend their days selling, repairing and washing sails for boats. They transform their surplus sailcloth into tote bags to bring in extra money.

But when the coronavirus outbreak slowed business, they turned their industrial sewing machines to a new task: making cotton masks for caregivers and others who need protection from the disease.

“We wanted to do something to give back,” Baldwin said from his North Sails workshop in the small village of South Freeport, about 20 miles north of Portland. “Doing something like this just makes you feel good.”

The 53-year-old Baldwin, who has operated his shop, known as a loft, for about 25 years, got the idea from employee Karen Haley. They went to work immediately and are now shipping to recipients as far away as the southwestern state of Arizona after word spread on social media that masks were available.

“People are out there just pleading for masks and have no supplies. Eric immediately said yes,” Haley said.

Haley’s mother is a quilter. Haley raided her mom’s stash of cotton remnants to turn into double-ply rectangles called for by a mask pattern they found on a hospital website. Baldwin’s former wife got a Jo-Ann fabric store to provide elastic at a discount.

Although they still have orders to fill for totes and sails, a portion of each day is dedicated to masks. Baldwin’s other worker, Alan Platner, volunteered to sew masks at home as well.

The trio have divided labor according to skill set. Haley is on cutting.

“I do not sew, actually,” she laughed.

Baldwin hired Haley to help run the tote side of the business nearly two years ago. Turning sailcloth into totes was a side gig he came up with during the 2008 recession to shore up his business and avoid having to lay off his tiny staff.

Now he faces uncertainty once again as the economic toll of the health crisis plays out.

“I have every intention of keeping both of these people employed,” Baldwin said. “We’re not at a point yet where that’s even close to being in jeopardy, but I do think in terms of the tote business. I would be shocked if that picks up. We’re essentially missing the tourist season.”

According to the Centers for Disease Control and Prevention, fabric masks are an option when other supplies have been exhausted. The world’s flow of masks has slowed to a trickle during the pandemic.

Baldwin and his crew join a wealth of volunteers around the globe churning out fabric masks that can be washed and reused. Their work has been met by an outpouring of gratitude from recipients.

“The response from the people has been overwhelming,” Haley said. “They’ve been so appreciative of what we’re doing. The recipients include a woman who works for the Department of Homeland Security whose husband is an EMT. Others are nurses and nursing assistants. One is a social worker who makes home visits.”

For most people, the new coronavirus causes mild or moderate symptoms, such as fever and cough that clear up in two to three weeks. For some, especially older adults and people with existing health problems, it can cause more severe illness, including pneumonia and death. The majority of people recover.

Baldwin estimates he and his crew have enough materials for 500 masks. There’s been a run on elastic, so when their stash is gone they might have to quit. He’s scrounging for more.

Even if he’s no longer able to produce the masks in Maine, the effort is likely to continue elsewhere. Baldwin put out the word to other North Sails lofts around the country, letting them know what he was doing. Four have already offered to begin making masks, including shops in San Diego, Chicago and Annapolis, Maryland.

On the sail side, the three have work in-house, but new sales have dried up, and other customers have put their orders on hold.