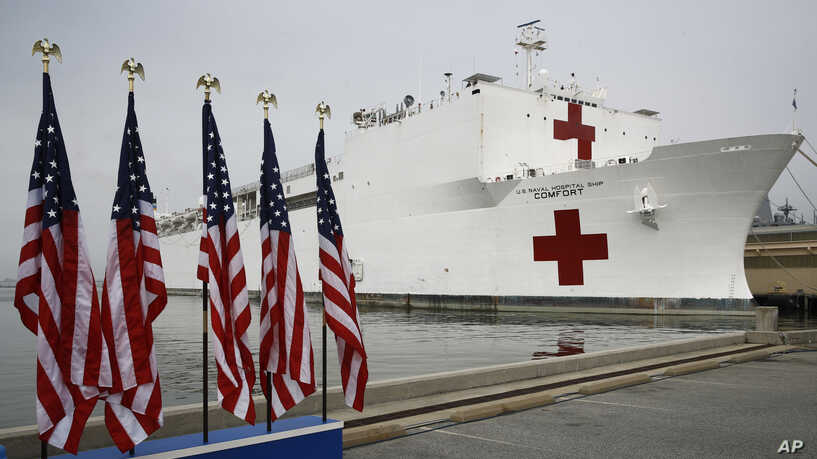 The global coronavirus pandemic death toll topped 30,000 Saturday, with the U.S. and France each posting more than 2,000 deaths, while Spain recorded its deadliest day, with 832 deaths, according to Johns Hopkins University statistics.

Italy, which has seen more than 10,000 deaths, accounts for a third of the global total.

In Wuhan, where the coronavirus outbreak began late last year, the city slowly began to reopen after months of near-total isolation. Thousands of people began arriving Saturday in the city in Hubei province.

There are now more than 660,000 confirmed cases of the coronavirus worldwide. The number of confirmed cases in the United States rose to 115,000 Saturday. The U.S. became the country with the most cases Friday, when it passed the 100,000 threshold.

New York, with more than 52,000 confirmed cases of the virus and more than 700 deaths, is the largest hot spot of COVID-19 activity in the U.S.

To help ease the burden on New York City’s health care system, which is being overwhelmed by the coronavirus pandemic, the U.S. Navy is sending a hospital ship to New York Harbor to help care for non-coronavirus patients.

President Donald Trump traveled to Norfolk, Virginia, Saturday for the sendoff of the USNS Comfort. The ship, with 1,200 service members aboard, is to arrive in New York on Monday. It will provide up to 1,000 beds to care for patients.President Trump on Hand as Navy Hospital Ship Leaves for NYC

During remarks in Virginia, Trump said the Comfort “is a 70,000-ton message of hope and solidarity to the incredible people of New York, a place I know very well. A place I love.”

Trump also said he was considering a quarantine of New York, New Jersey and Connecticut, which is being hard-hit by COVID-19 cases. But he had backed away from such a move by late Saturday, instead urging the U.S. Centers for Disease Control and Prevention (CDC) to consider a “strong travel advisory” for the tri-state area.

Vice President Mike Pence tweeted the CDC was urging residents of the three states to limit nonessential travel for 14 days to try to stem the outbreak.

New York state Governor Andrew Cuomo said the quarantine idea was “preposterous,” and that the subject did not come up during a phone call he had with Trump earlier Saturday.

U.N. Secretary General Antonio Guterres announced the donation Saturday of 250,000 surplus protective masks to medical professionals in New York “who have been working courageously, selflessly, and tirelessly in response to the spread of COVID-19 across the boroughs, in the hope that they play some small role in saving lives.”

As New York fights to contain the virus, Cuomo said Saturday the state’s April 28 presidential primary will be delayed until June 23.

Trump’s visit to Virginia came one day after the U.S. Defense Department said the president is ready to have the National Guard and the Ready Reserve join in the fight against COVID-19. The statement said people who are called up would be “persons in headquarters units and persons with heightened medical capabilities” and that federal agencies would confer with state officials before deploying them.

Friday, Trump signed a $2.2 trillion stimulus measure to bolster the economy, reeling under the effects of the coronavirus, and used government powers under the Defense Production Act to compel General Motors to manufacture ventilators to help COVID-19 patients as the U.S. became the first country in the world to surpass 100,000 coronavirus cases.

After being criticized by Trump for “wasting time,” GM released a statement Friday saying it had been working since last week with Ventec Life System to mass produce critical care ventilators for the coronavirus pandemic.

In India, where the world’s largest coronavirus lockdown is underway, authorities have sent a fleet of buses that can accommodate some 52,000 people to the outskirts of the capital of New Delhi to meet migrant workers trying to return to their home villages.

Thousands of people fled their homes after Prime Minister Narendra Modi ordered a 21-day lockdown that began Wednesday. Most of them are day laborers who lost their jobs, along with millions of others in India, because of restrictions on activity.

Britain, ranked 8th worldwide with more than 14,700 cases, was criticized in a scathing article in a British medical journal that said Britain’s National Health Service was “wholly unprepared” for the coronavirus outbreak, and it is hard to understand why.

Richard Horton, editor of Lancet, said NHS officials had written an article for Lancet in January saying the virus “could be about to become a global epidemic” and that “preparedness plans should be readied for deployment at short notice…to deal with the consequences of a global outbreak of this magnitude.”