One Italian Official Describes How Coronavirus Might Have Spread 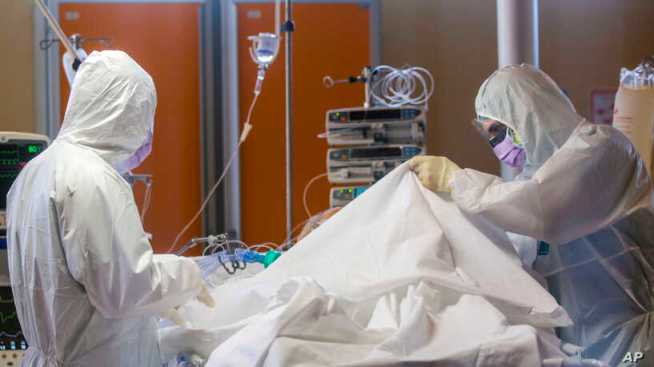 Medical Staff of the ICU of Casalpalocco COVID-19 clinic in the outskirts of Rome tend to patients, Wednesday, March 25, 2020

ROME – A provincial official in Italy says a soccer game and a missed opportunity to detect one early coronavirus case might have contributed to the rapid spread of the disease in his hard-hit country.

The mayor of Bergamo, Giorgio Gori, says his province, like many others in Italy, were not prepared for the coronavirus outbreak. Bergamo did not go into lockdown initially like 10 other towns in Lombardy and one in Veneto.

A case of pneumonia at a hospital in Bergamo province in late February was not recognized as coronavirus at the time. Gori believes that patient infected others, including doctors and nurses.

Gori says another event is also believed responsible for the rapid spread of the virus in his province: a Champions League soccer game played February 19.

Gori says 40,000 fans from the Bergamo area watched the match played at Milan’s San Siro stadium between Atalanta and Valencia.

Many others watched the game at home in large groups, Gori added, and no doubt all those gatherings caused an escalation of the virus to nearly 7,000 cases.

Hospitals in the province of Bergamo have since been overwhelmed with patients. The death toll has not stopped rising and the province had nowhere to take bodies.

Gori says the government was forced to request help from funeral services of other Italian regions and the army helped to take many of the bodies to crematoriums in other cities.

For the past three days the number of confirmed cases in Italy has dropped and there is cautious optimism it is the start of a downward trend. But the head of the government’s coronavirus relief effort, Domenico Arcuri, implored Italians to continue to respect the stringent measures imposed on them because it will be the only way out of this crisis.

Arcuri says that, “in a very short time we were harshly attacked by a strong, invisible and unknown enemy, adding that in the midst of “thousands of difficulties we reacted immediately and before many other countries in the world.

The commissioner said Italy is facing an emergency without precedent and everyone must do their utmost to ensure that “this emergency does not spread to those regions where so far it has been contained.”