US Moves to Further Isolate Itself Amid Coronavirus Pandemic 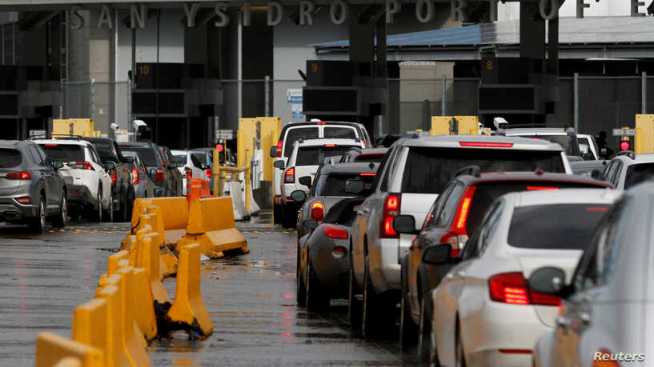 WHITE HOUSE – The United States is moving to further isolate itself from the world amid the global coronavirus pandemic.

The U.S. borders with Canada and Mexico will close to nonessential travelers from midnight on Saturday.

“All of those measures that we’re putting in place will protect the health of all three nations and reduce the incentive for a mass global migration that would badly deplete the health care resources needed for our people,” President Donald Trump said Friday.

The announcement came a day after the State Department issued an unprecedented global Level 4 travel advisory warning Americans not to travel abroad and for those in other countries to return immediately unless they plan to stay outside the United States for an extended period time.

A nationwide internal lockdown is not under consideration, Trump told reporters.

“I don’t think we’ll ever find that necessary,” said the president.

The border restrictions will last as long as needed to protect the American people, said Secretary of State Mike Pompeo, alongside Trump.

“Let me be clear that neither of these agreements with Canada or Mexico applies to lawful trade or commerce. Essential commercial activities will not be impacted,” said Chad Wolf, the acting homeland security secretary. “We will continue to maintain a strong and secure economic supply chain across our borders.”

The president, in response to questions from reporters, said the Defense Production Act, which he invoked this week, is now being used to secure ventilators, masks and other critical equipment for health workers.

There was a clear difference of opinion at the briefing between the president and one of his coronavirus task force members, Dr. Anthony Fauci, about whether a drug called chloroquine should be quickly dispensed to COVID-19 patients.

The immunologist, who is the head of infectious diseases at the National Institutes of Health, twice attempted to caution that it was premature to call the anti-malarial safe and effective for treating COVID-19 patients.

Reports of the medicine helping coronavirus patients get better in China and Australia are “anecdotal. It was not done in a controlled clinical trial. So you really can’t make any definitive statement about it,” said Fauci.

Trump insisted that he had “a feeling” that the drug would work and “we sure as hell ought to give it a try.”

The president also used the briefing to again verbalize his concerns about the loyalty to his administration among career bureaucrats.

The president, with his secretary of state on the podium, called for Pompeo to take additional questions from reporters before he returned to the “Deep State Department.”

Asked about whether it was appropriate to besmirch his department at a time thousands of U.S. foreign service officers are working at the State Department and in missions abroad during this crisis, Pompeo replied: “I’ve worked with the president for three years now. I know how much he values the people on my team.”

Trump then chimed in: “What a good answer. Very true, too.”

Trump, during the 93-minute briefing, also lashed out at reporters.

Asked by NBC’s Peter Alexander what he would say to the millions of Americans who are scared, Trump replied: “I say that you’re a terrible reporter, that’s what I say,” calling it a nasty question from a sensationalist journalist.

Later, Yamiche Alcindor of PBS’s NewsHour got a testy response from the president after she asked when would everyone in the United States “who needs a coronavirus test be able to get a test?”

“No one is talking about this except you, which doesn’t surprise me,” responded the president.

When the journalist pressed him specifically about those with coronavirus symptoms who could not get a test, Trump said: “Yeah, well, OK. I’m not— I’m not hearing it.”

Trump also responded to a pair of questions from his former press secretary, Sean Spicer, who occupied a briefing room chair shared by two conservative media outlets: One America News and Newsmax.

Spicer, who began co-hosting an evening show on Newsmax earlier this month, asked about concern among small businesses nationwide that they have “weeks, not months,” to survive amid a shutdown due to the pandemic.

Spicer also queried Trump about whether he was “concerned about members of Congress using information they learned from updates to sell stocks and profit off” that information.

“I don’t know too much about what it’s about,” replied Trump to the second question. “But I find them to all be very honorable people. That’s all I know. And they said they did nothing wrong.”

Trump told reporters he had a positive telephone conversation in the morning with Senate Minority Leader Chuck Schumer about the next phase of a coronavirus economic relief package.

“We had a wonderful conversation. We both want to get to a good solution,” said the president. “Seeing people that weren’t speaking, getting along well, because we all have one common aim, and that’s to get rid of this invisible enemy, get rid of it fast.”

In excess of 15,000 people in the United States have tested positive for the coronavirus and more than 200 have died of COVID-19.

« What’s Next After Self-Isolation? Expert Outlines Our Coronavirus Future
NY City Offers Guidelines for Lovers in the Age of Coronavirus »