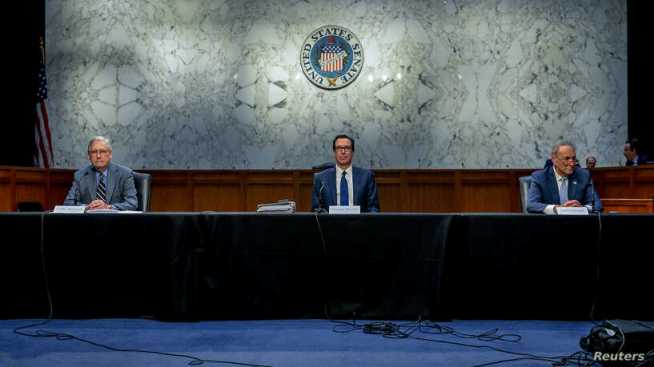 WASHINGTON – The U.S. Congress is moving toward passage of a massive $1.8 trillion economic aid package to send money to most Americans and many businesses that have been severely impacted by the deadly coronavirus.

Aside from the obvious impact of the public health crisis, perhaps two million or more U.S. citizens have been laid off from work as thousands of schools, national businesses and such community enterprises as gyms, restaurants, bars and stores have shut their doors, either voluntarily or under state and local government orders.

Governors in five states — New York, New Jersey and Connecticut in the East, Illinois in the U.S. heartland and California on the Pacific coast — have ordered millions of people to stay home, in effect quarantined to prevent the spread of the coronavirus. No national shutdown is planned.

All stock market gains since President Donald Trump took office in January 2017 have been erased in a matter of a few weeks, while economists say the U.S., the world’s biggest economy with more than $21 trillion in goods and services produced last year, could soon slip into a recession, its first in more than a decade.

The toll from the coronavirus is mounting in the U.S., with more than 27,000 confirmed cases and at least 323 deaths, with both figures markedly increasing in recent days.

The U.S. Senate, normally sharply politically divided between the 53-member Republican majority and the 47 opposition Democrats, is working on the aid package in tandem with the administration of the Republican Trump.

The Senate is planning to approve it in a rare Sunday afternoon session, with final passage in the Democratic-controlled House of Representatives on Monday.

“We’re all negotiating and everybody’s working hard,” Trump said Saturday, while urging his countrymen, “Stay at home and save lives.”

Treasury Secretary Steven Mnuchin, Trump’s key negotiator with congressional leaders, told the “Fox News Sunday” show, “I do think it will get done. The president is very determined to help Americans.”

“We think we can stabilize the economy,” Mnuchin said.

Mnuchin said the aid package would give thousands of small businesses, those with 500 or fewer employees, enough cash to keep their businesses afloat for two weeks provided they keep their employees working as soon as they can and not dismiss them.

He said this part of the aid package would affect about 50% of the U.S. economy, about half of its workforce of 160 million people.

Mnuchin said that in addition, most Americans would get direct aid, with a family of four getting about $3,000 in one-time assistance. Congressional leaders say this part of the aid package would extend to individuals earning up to $99,000 annually and married couples up to $198,000, which covers about 91% of U.S. households.

“They can think of this as a bridge to get through this,” Mnuchin said. He said the cash to families would be a one-time payout, but that if the coronavirus impact lasts longer “we’ll come back for more.”

The Treasury chief said a third plank of the package would sanction $4 trillion in lending rights for the country’s central bank, the Federal Reserve, to inject new liquidity into the American economy as it sees fit.

“We need the money now,” Mnuchin said of the overall package. “The president has every intention this is going to look a lot better in eight to 10 weeks.”

“The U.S. economy is strong,” he said. “The economy is going to bounce back significantly.”

« NY City Offers Guidelines for Lovers in the Age of Coronavirus
Trump to Kim Jong Un: We Can Help With Coronavirus »