Reporter’s Notebook: Voting in the US Under the COVID-19 Emergency 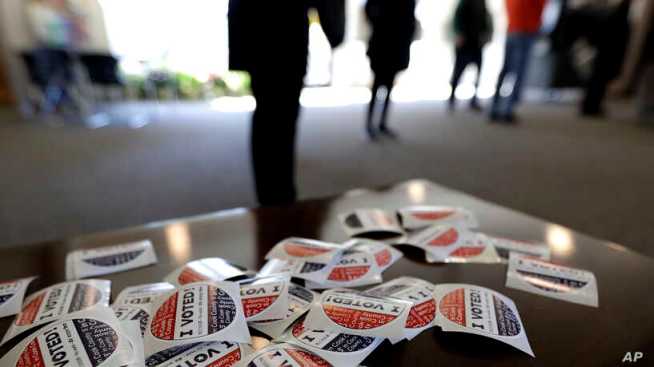 OTTAWA, ILLINOIS – After living in the United States for 15 years, and less than a year after becoming a U.S. citizen, my British-born wife, Joanne, was planning to cast her first ballot in a U.S. election — the March 17 Illinois primary.  Usually, an exciting time for any family.

She had planned for this moment for several months by researching newspaper articles, websites, and assorted campaign literature outlining the positions of not just the presidential candidates, but the local candidates in our area.

We talked about including in our experience, our three sons, all of whom are still too young to vote.  We wanted their first experience watching democracy in action in the U.S. to be the one where they could witness their mother going through the process for the first time.

But as COVID-19 descended upon us, the uncertainty of whether there would even be a primary election in Illinois increased with each passing hour.

While there are still no confirmed cases of this strain of the coronavirus in our LaSalle County area, confusion about its impact on the election process began last week when several nursing homes closed access for visitors to their facilities. This began a scramble for election officials to find alternative polling sites.

Our polling location — a Knights of Columbus meeting hall near the center of town — was not affected by these changes, but uncertainty grew as first our state, then federal officials, began enacting restrictions on the number of crowds that could gather, and social distancing between people became standard operating procedure.

By Sunday night, with the announcement that most schools, churches, bars, restaurants, casinos, movie theaters and other public venues would close altogether, it seemed unlikely the election here could still go on.

Late Monday night, we learned that Ohio was postponing its primary election. And while Illinois did not appear to be following suit, I thought that might change overnight.

Scrolling through my newswires and social media feeds early on Election Day, it was clear that voting was in fact still on in Illinois, along with Arizona and Florida.

One of the posts in my social media feed that immediately caught my attention was from retired science teacher Joe Jakupcak, who works as a hiking and nature guide at Starved Rock State Park in central Illinois.

“I became eligible to vote on March 31, 1971,” he explained. “Since then, I have not missed a primary, general, runoff, or special election. Today the schools, churches, and libraries are closed. The restaurants and bars are closed. Banks offer no pens or transaction slips. The parks and my job are closed. THE POLLS ARE OPEN!!! I am a prime Boomer target for COVID-19 and a believer in the science I taught for so long. Today I am staying sheltered in place. God willing, I’ll be in line to vote next November.”

While Joanne and I were still committed to voting in person, Jakupcak’s post gave me pause.  As I scrolled on, I read pharmacist Elizabeth Thrush’s post.

“So, I just went to vote,” she told her Facebook friends. “The election judges have no sanitizer, gloves or any protections to be dealing with the public all day today. Please don’t go if you’re sick and if you have any extra protection supplies please donate them to the volunteers or bring your own to protect yourself!”

The more I read, the more concerned I became.  Voting in person was not something we considered lightly, but after discussing it with my wife, we decided to not take the children with us, and would ensure we maintained distance from other voters.

When we arrived at the Knights of Columbus hall, the first noticeable sign was the absence of many cars in the parking lot.

We quickly made our way through the entrance to our precinct check-in desk, where an election judge, properly equipped with latex gloves and ample hand sanitizer nearby, took our information. I looked around for other activity, since this location serves about six different local voting precincts. Only one other voter was present during our time there, so maintaining social distance with others wasn’t an issue.

We registered our names, received our ballots, and proceeded to the voting booth.  After filling out our forms and making our selections, my wife and I proceeded to the ballot box to submit our votes. I looked at the number on the digital readout of the ballot box that shows how many people voted before us in the precinct. It appeared that we were 21st and 22nd. The election judge helped ensure our ballots were properly submitted, and we took our “I Voted” stickers and left.

Our entire experience lasted fewer than 10 minutes. While we didn’t really encounter many people inside the location, the ominous concerns about COVID-19 were present throughout the process.

I read later that others in my area had great concerns about the perceived lack of cleaning of voting booths, or lack of availability of safety equipment such as gloves and hand sanitizer.

Later that day, as we watched election returns trickle in, it was clear that the coronavirus had profoundly affected voters all across the state, some of whom had to wait in long lines. There was also confusion with polling locations, and others dealing with precincts where election judges didn’t show up.

Early indications showed that in-person voter turnout was down in many locations throughout Illinois this year, but requests for mail-in ballots and early voting reached record highs.

While it wasn’t the way Joanne thought her first voting experience would unfold, the decision on how to vote, and when, is a personal one.

We hope to have the opportunity to share the experience with our children in the general election in November, at a time when — hopefully — concerns about COVID-19 have eased, and life and voting are back to normal.

« Trump Says He ‘Always’ Took Coronavirus ‘Very Seriously,’ but Past Statements Contradict That
More US Immigration Courts Closing Due to Coronavirus »