Long Waits, Panic at US Airports Under New COVID Regulations 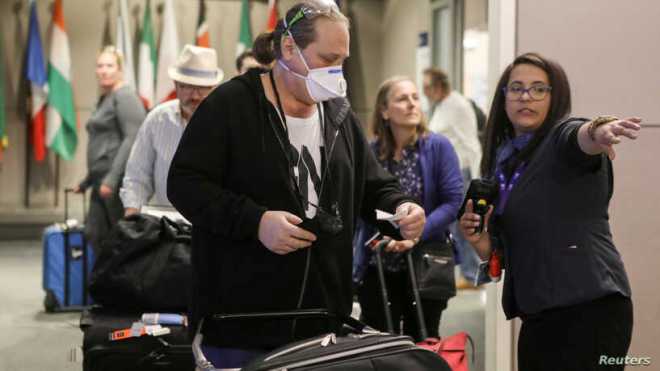 Long wait times and panic were seen at airports across the United States as authorities work under new regulations imposed to deal with the spread of the novel coronavirus.

“We are aware of the reports of increased wait times at some airports across the nation. CBP along with medical personnel are working diligently to address the longer than usual delays,” acting commissioner of U.S. Customs and Border Patrol Mark Morgan wrote in a statement.

“Nothing is more important than the safety, health and security of our citizens,” the statement added.

We are aware of the reports of increased wait times at some airports across the nation. CBP along with medical personnel are working diligently to address the longer than usual delays. Nothing is more important than the safety, health and security of our citizens. Full statement:

U.S. nationals and permanent residents who are returning from countries that are part of a new travel ban will be required to undergo additional screening and questioning to determine if they can return to their communities, Department of Homeland Security officials said.

If not required to seek medical help, they will be sent home and will spend two weeks in self-quarantine. Foreign nationals living in the U.S. who have traveled to countries on the ban, however, will not be allowed to return in the United States. A DHS official said they would have to travel to a third country, not included in the ban, and wait out the two-week period of self-quarantine before traveling to the U.S.

We are doing very precise Medical Screenings at our airports. Pardon the interruptions and delays, we are moving as quickly as possible, but it is very important that we be vigilant and careful. We must get it right. Safety first

The United States Saturday expanded its travel ban with Europe to include Britain and Ireland.

In a press briefing Saturday with the White House coronavirus task force, Trump said he is considering restricting travel within U.S. borders as well, especially from certain areas of concern.

The United States has just over 3,000 confirmed coronavirus cases and 60 deaths from the disease. New York state, which has instituted a containment zone around a cluster of infections in the town of New Rochelle, Saturday reported its first death from COVID-19.

Trump has been tested for the virus and the results were negative. Vice President Mike Pence, who heads the coronavirus task force, said he would consult with the White House physician about whether to take the test.

The White House said it is now conducting temperature checks on anyone in close contact with Trump or Pence. Before the Saturday press briefing, a member of the White House physician’s office took the temperature of each journalist in the briefing room, marking a change in practices because of a concern that the president and his staff have been in contact with infected individuals.

Earlier Saturday, the House approved legislation to provide direct relief to Americans suffering physically, financially and emotionally from the coronavirus pandemic, and Trump threw his support behind the congressional aid package. The Senate will consider the bill this week.

The emergency package includes funds to support small- and medium-sized businesses faced with increased costs from sick leave, as well as individuals incurring loss of income from quarantines or reduced economic activity.

Central to the president’s emergency measures is the expansion of testing for the coronavirus disease. The United States has been criticized for its slow roll out of coronavirus test kits, and Trump has pledged to accelerate the testing capacity, including by setting up drive-through testing sites.

The director of the National Institute of Allergy and Infectious Diseases, Dr. Anthony Fauci stressed the need to practice social distancing in order to lower rates of spread and allow health practitioners to gain control of the situation.

“Americans should be prepared that they are going to have to hunker down significantly more than we as a country are doing,” Fauci said Sunday, speaking on NBC’s “Meet the Press.”

The president has come under repeated criticism for downplaying the risk of infection and the threat posed by the virus in the United States. He struck a more serious tone Friday and Saturday while announcing the new federal measures, including the declaration of national emergency.

Trump’s declaration Friday of a national emergency prompted the U.S. Defense Department to stop all domestic travel for military service members and their families effective Monday through May 11.