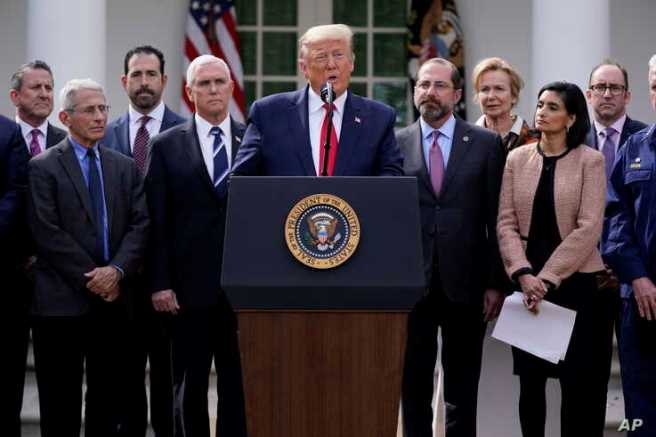 WHITE HOUSE – U.S. President Donald Trump said he is declaring a national emergency, invoking the Stafford Act to allow more federal aid to stream to states and cities to combat the coronavirus pandemic.

“We will overcome the threat of the virus,” the president said Friday afternoon at a nationally-televised news conference from the White House Rose Garden.

Trump, who has declared five previous national emergencies, had come under increasing pressure, especially from opposition Democrats, in recent days to take such action as governors and mayors across the United States declared states of emergency, ordering the cancellation of public gatherings and closure of schools.

The action by the president will free up tens of billions of dollars in funding in the Disaster Relief Fund. It allows a state to request the federal government pay for 75 percent of costs for such expenses as emergency workers, medical supplies and tests and vaccinations to respond to the virus, which some epidemiologists warn could soon overwhelm the country’s health care system.

Prior to the president’s speech, House Speaker Nancy Pelosi made a brief one of her own on Capitol Hill. Pelosi said the Democratic Party-controlled chamber on Friday would pass the Families First Coronavirus Response Act today.

“The three most important parts of this bill are testing,  testing, testing,” said Pelosi, who explained it will also include two weeks of paid sick leave for those affected and improved unemployment insurance and a bolstered lunch program for schoolchildren.

Cases of the coronavirus have now been reported in 47 of the 50 U.S. states.

Only about one percent of the 136,000 cases of the COVID-19 disease are in the United States, but public health officials are bracing for a much larger number of patients. Some officials say the number may actually be much larger because of limited testing conducted, so far, for the coronavirus infection.

The largest U.S. cluster of deaths from the coronavirus is in the state of Washington, where 31 deaths have been reported so far. The leaders of the Group of 7 leading industrialized countries are to hold a videoconference Monday to discuss the pandemic. “We will coordinate research efforts on a vaccine and treatments, and work on an economic and financial response,” French President Emmanuel Macron announced via Twitter.

In a nationally televised addressed on Wednesday evening, Trump restricted travel for 30 days, effective Friday at midnight, from most European countries with the notable exception of Britain.

The president confirmed that the federal government is planning to partner with the private sector to set up drive-through testing sites for the coronavirus amid frustration expressed by people who suspect they may be infected but cannot get tested.

The plan was discussed Friday during a meeting between White House officials and executives of the retail, pharmaceutical and technology sectors.

The spread of the virus has unsettled global markets, with U.S. prices for securities dropping more than 20 percent on average from recent highs amid negative investor sentiment.

Trump has repeatedly told those in the White House that testing kits for the virus were on track, even though all facts – and federal health officials – have said otherwise. With the virus only expected to spread further, Trump has begun lashing out at others around him for not doing more to stem the markets’ slide, lighting into Treasury Secretary Mnuchin earlier this week and grumbling to confidants that Vice President Mike Pence has repeatedly contradicted him in briefings, the officials said.