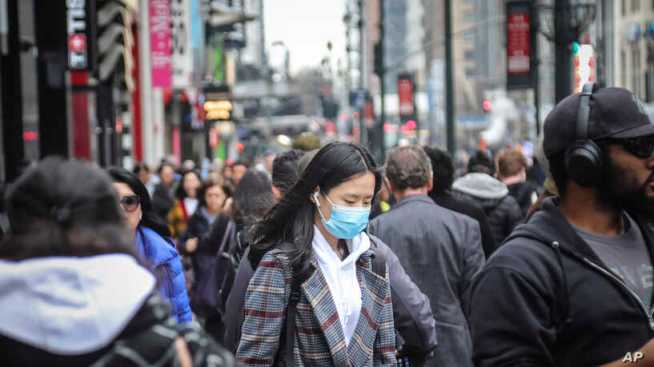 WHITE HOUSE – U.S. President Donald Trump met with congressional leaders Tuesday afternoon to discuss a payroll tax cut as part of efforts to provide “substantial relief” to  businesses and individuals who suffer financially as a result of the coronavirus outbreak. “

“We’re also going to be talking about hourly wage earners getting help so that they can be in a position where they’re not could ever miss a paycheck to be working with companies and small companies, large companies, a lot of companies so that they don’t get penalized for something that’s not their fault,” Trump told reporters on Monday evening in the White House briefing room.

With stock prices plunging Monday amid an oil price war and the coronavirus crisis, Trump met with his economic advisers, including Treasury Secretary Steven Mnuchin, who presented him with policy options to counter the quickly emerging threats to the economy.

“The economy will be in very good shape a year from now,” predicted Mnuchin, who took questions from reporters, alongside Vice President Mike Pence, after a brief appearance by Trump in the press briefing room.

Trump announced a news conference would be held at the White House on Tuesday that will focus on economic measures.

The U.S. travel industry, which annually generates more than $1.6 trillion in economic output and is expected to suffer substantially because of the coronavirus outbreak, is one key area of the administration’s relief efforts.

“We’re also working with the industries including the airline industry, the cruise ship industry, which obviously will be hit,” said Trump.

The United States “will use all our tools” to fight the effects of the coronavirus, said Mnuchin, who announced that the White House will hold a meeting later in the week with bank officials.

As the Dow Jones Industrial Average dived more than 2,000 points during Monday morning trading, Trump, via Twitter, blamed the market drop on Saudi Arabia and Russia arguing over the price and flow of oil.

“That, and the Fake News, is the reason for the market drop,” he wrote.

But, House Speaker Nancy Pelosi said the president’s handling of the coronavirus outbreak in the U.S. is causing the uncertainty in the markets.

“I think that what is happening there is a reflection of lack of confidence, and so we would hope that what is coming out of the White House will be more consistent with what the health advisers are putting forth,” Pelosi said.  “We would hope that rather than name-calling, (Trump) would be again joining with his health care professionals who are advising him and the rest of us in a well-coordinated government agenda.”

Pence, at the briefing, did not directly answer a reporter’s question as to whether the fall in stock prices in any way resulted from a perception that the White House’s response to the coronavirus crisis lacked leadership and foresight. “

The Dow closed off nearly 7.8% Monday, recording its largest-ever single-day point drop of 2,013.76.

After Tuesday’s opening bell on Wall Street, stocks recovered some of their losses with all the key indexes gaining.

The number of confirmed U.S. cases of coronavirus, which originated in China, is more than 700, including at least 26 deaths.