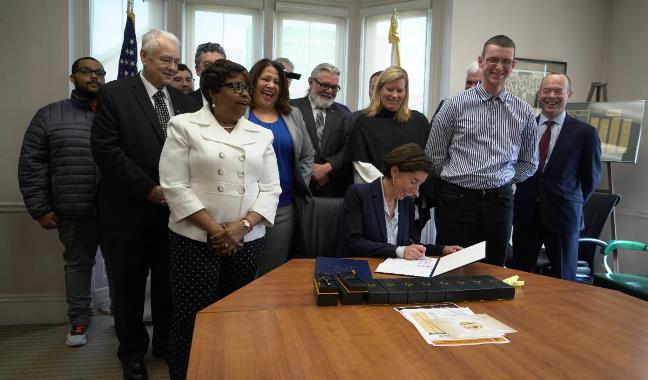 PROVIDENCE, R.I.– Today Governor Gina M. Raimondo, surrounded by legislators, union leaders and other advocates for working families, signed into law H7157A/S2417A, raising the minimum wage in Rhode Island to $11.50 an hour. The wage increase will take effect on October 1.
“Nobody should work full-time and live in poverty,” said Governor Raimondo. “Over the past few years, we’ve turned our economy around by investing in our workers. From new job training programs to investments in education, we’re working to ensure that every Rhode Islander has a good, family-supporting job. I’m proud that we’ve increased the minimum wage four times since I took office, and I look forward to working with the General Assembly to continue building on that progress.”
When Governor Raimondo took office in 2015, Rhode Island’s minimum wage was $9 an hour. Thanks to advocacy from the Governor, members of the General Assembly, and community leaders, that rate increased in 2016 to $9.60 an hour, in 2018 to $10.10 and hour, and in 2019 to $10.50 an hour. This year’s increase to $11.50 an hour keeps Rhode Island at pace with our neighboring states.
“As the costs of daily life continue to increase, we must not forget those who are on the bottom of the economic ladder. There is still much more work to be done to address this issue, but, this minimum wage increase is a good first step to ensuring that Rhode Islanders have a roof over their heads and food on the table for themselves and their families,” said Senator Erin Lynch Prata (D-Dist. 31, Warwick, Cranston).
“Putting more money in the pockets of those with the lowest wages helps their families and the economy overall, because people at that end of the wage spectrum pump that money right back into the local economy, buying necessities. It also means less demand for public assistance. A stronger minimum wage will mean a stronger economy for Rhode Island,” said Representative David Bennett (D-Dist. 20, Warwick, Cranston). “I believe very strongly that all working people deserve to be able to afford a decent life. Minimum wage hasn’t kept pace with inflation since it began, and Rhode Island’s remains behind neighboring states’. Each time we raise it, it means a bit of relief and a bit more dignity for those workers who struggle the most to afford life in Rhode Island.”
“The working people of Rhode Island are grateful for the leadership of Governor Raimondo, Senate President Ruggerio, and House Speaker Mattiello on the early passage of the minimum wage bill this year,” said RI AFL-CIO President George Nee. “It sends a strong signal that hard work is honored and appreciated in Rhode Island.”