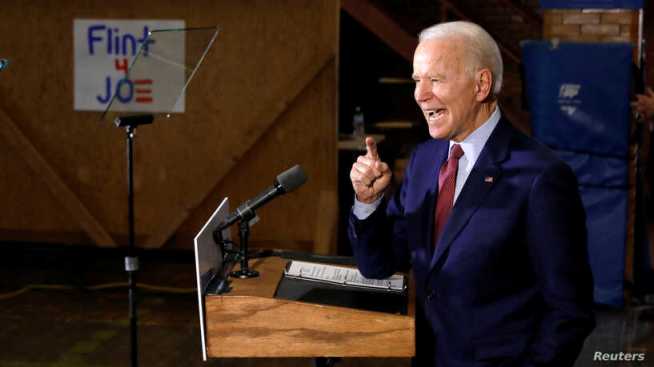 WASHINGTON – In 2016, Michigan gave Sen. Bernie Sanders one of the most surprising primary wins in U.S. political history.

In 2020, the self-described democratic socialist will need another boost from Michigan to revive his campaign to secure the Democratic presidential nomination over his lone remaining major rival, former Vice President Joe Biden.

With 125 delegates, Michigan is the biggest prize up for grabs among the six states holding primaries Tuesday. Sanders signaled the importance of Michigan to his campaign, abandoning a planned rally in Mississippi to hold five campaign events in the state over the weekend, including one in Dearborn, where the nation’s largest Muslim community strongly supports him.

Dearborn was one of the areas that helped Sanders secure his 2016 victory in the Michigan primary over eventual Democratic party nominee Hillary Clinton by a narrow margin of 49.8% to 48.3%. After trailing Clinton significantly in the polls, Sanders won by just 17,000 votes.

Sanders aims to improve on that narrow margin of victory in 2020, even though in some states to date, he has struggled to turn out voters in the same numbers he did in 2016. A Detroit Free Press poll released Monday does not look promising for him. The survey of 400 Michigan voters shows Biden outpacing Sanders by a significant margin — 51% to 27%.

Here are four things to watch politically in Michigan on Tuesday:

In 2016, Hillary Clinton won delegates in the more populous areas of Detroit, but Sanders pulled off his win by securing big upsets in rural counties, appealing to a core constituency of white working-class voters. Analysts say Sanders’s win in 2016 was due in large part to Clinton’s weakness with what has traditionally been a core constituency of the Democratic Party.

“The dynamics are very, very different from four years ago when Sanders and Clinton were more neck and neck at this point in the process,” said Dave Dulio, a professor of political science at Oakland University in Rochester, Michigan.

Biden is rolling into Michigan on a wave of Super Tuesday momentum, with proof from the South Carolina primary that he can mobilize the African American vote — a key constituency in Michigan — as well as bring new voters to the polls, as evidenced by record turnout in key swing states such as Texas and Virginia.

“There are a couple of things there that could help Biden relative to Hillary Clinton,” Kessler said. “The place I would look to is the suburbs — there’s a lot more suburban Democratic voters in 2020 than there was in 2016. These are the people that moved from Trump. These are the people that delivered the majority to Democrats in 2018. Do they come out and vote in large numbers the way they did in Virginia and North Carolina? And if they do, that will carry Biden over.”

Michigan will also be a test of Sanders’ argument that his campaign can mobilize overlooked voters, including younger voters and voters of color.

“Young people are notoriously unreliable voters, for whatever reason,” said Vincent Hutchings, a professor of political science at the University of Michigan Ann Arbor. “If that population turns out in high numbers, that’s a good sign for Sanders.”

Hutchings also noted Sanders’ strength among Michigan’s Muslim population. He won the endorsement of Emgage, the nation’s only Muslim political action community, for directly appealing to an electorate that is often overlooked by other politicians. At the same time, Sanders’ strength in Latino communities helps little in Michigan, where that demographic makes up only a small part of the electorate.

Sanders’ weakness with African American voters could be the blow that kills his chances in Michigan.

Democratic delegate math in Michigan is anything but straightforward. Democrats allocate their delegates according to the statewide vote and the vote by congressional districts. Because of this weighting system, winning boils down to securing large population areas such as the predominantly African American city of Detroit. Sanders failed to win the city in 2016, and his poor 2020 performances in southern states with African American electorates does not bode well for his chances in the Motor City.

Hutchings said African Americans make up about 15% of the Michigan electorate overall, and an even larger share of the Democratic voters controlling the results Tuesday.

Meanwhile, Biden heads into the primary with major endorsements from two former African American presidential candidates, senators Cory Booker and Kamala Harris, who were campaigning with him Monday in Detroit.

The impact of endorsements

In addition to the Harris and Booker endorsements, Biden also gained the support of Michigan Gov. Gretchen Whitmer. Sanders endorsed Whitmer’s progressive Democratic challenger, Abdul El-Sayed, in 2018, but campaigned for her in the general election.

Analysts differ on the impact of endorsements. Conventional political wisdom holds that endorsements usually do not dramatically alter political races. That appears to have been upended this election cycle with the boost Biden received from Congressman James Clyburn, a Democrat from South Carolina who gave the former vice president his stamp of approval just days before the do-or-die primary in his home state, which Biden won handily.

Biden had pinned his hopes on his ability to mobilize the African American vote in South Carolina after severely disappointing showings in Iowa and New Hampshire, two smaller states that do not reflect the demographic diversity of the United States.

Both Dulio and Hutchings said Whitmer’s endorsement of Biden in Michigan was significant.

“It certainly is a highly visible endorsement for the Biden campaign, and it can’t hurt him,” Hutchings said. “It probably helped him increase the (vote) margins.”

Sanders’ campaign does have a strength that is uniquely suited to Michigan: outreach to blue-collar factory workers, which has been a central point of his presidential campaigns in 2016 and 2020. Nowhere is that more important than in Michigan, the center of the auto industry.

Sanders has been savaging Biden’s record on trade, citing his support for NAFTA (North American Free Trade Agreement) on the campaign trail and in numerous advertisements airing locally, according to Dulio.

He said that argument could resonate with the all-important suburban women demographic, swinging some of their votes to Sanders.

“Michigan is a unique place, because so many people are tied to the auto industry. Whether it’s in a place like Macomb County, where you’re talking about folks who work in manufacturing and do the manufacturing at Ford, GM and Chrysler plants, or part of the auto manufacturers supply chain, or if you’re talking about folks in, say, Oakland County right next door, who are part of the white-collar contingent of auto company employees,” said Dulio.

If Sanders can convince those key voters their livelihoods are at stake in this election, his campaign may be able to survive past Michigan.