Trump: US ‘Totally Prepared’ for Coronavirus 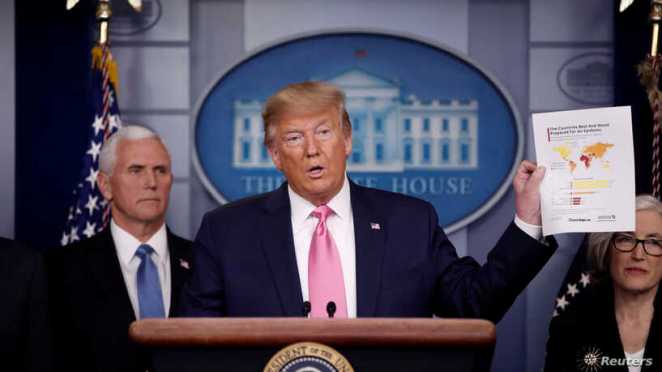 U.S. President Donald Trump said Wednesday he thinks the spread of a new coronavirus in the United States is avoidable and expressed confidence his administration is ready to respond.

“I don’t think it’s inevitable,” he told reporters at the White House. “It probably will. It possibly will. It could be at a very small level or could be at a larger level. Whatever happens, we’re totally prepared.”

He added that “the risk to the American people remains very low.”

Trump’s comments came a day after officials from the Centers for Disease Control and Prevention said the only question is when the virus will spread and how many people in the United States will have severe illness. The virus has infected more than 80,000 people in at least 37 countries.

So far, there are 60 total cases in the United States. Three are people who had been in Wuhan, China, the center of the outbreak, while 42 were brought back to the United States after being on board a cruise ship where hundreds of people became sick as it sat in quarantine off Japan.

Health officials are concerned about what they call “community spread,” or instances of people being infected without knowing how or where.

The CDC reported Wednesday one such possible case: A person in California tested positive for the virus but reportedly did not have a history of travel to areas where the virus is spreading or known contact with another infected patient.

Dr. Anthony Fauci, who leads the National Institute of Allergy and Infectious Diseases, said at the White House news conference that while work to develop a vaccine for the coronavirus is ongoing, the process of testing to make sure it works and is safe will take months to a year to complete. That means a vaccine could be effective if there is another outbreak in a year, but for this one, Fauci said public health measures are the way to contain it.

Dr. Anne Schuchat, the principle deputy director of the CDC, said containment efforts have thus far been working in the United States, but that the agency expects more cases and that it is a good time for the American public to prepare.

“The coronavirus that we’re talking about is a respiratory virus. It’s spread in a similar way to the common cold or to influenza. It’s spread through coughs and sneezes, so those everyday, sensible measures that we tell people to do with the flu are important here: covering your cough, staying home when you’re sick and washing your hands,” she said.

Trump lauded his administration’s decision to restrict entry to non-U.S. citizens traveling from China as a measure that has helped keep U.S. exposure low. When asked if he would do the same for Italy and South Korea, two of the hardest-hit areas outside of China, Trump said he may take that step but that now is not the right time.

The president has asked Congress for $2.5 billion to meet the coronavirus challenge. Earlier Wednesday, Senate Minority Leader Chuck Schumer proposed $8.5 billion for the effort after criticizing Trump’s request as too little, too late to meet the challenge.

Trump named Vice President Mike Pence as the so-called coronavirus czar. Pence will lead a task force of federal and private health experts, saying the American people can be confident the government has their health and safety as a top priority.

“In recent days, the White House met with over 40 state, county and city health officials from over 30 states and territories to discuss how to respond to this, to the potential threat of the coronavirus,” Pence said. “We’ll be working with them in renewed ways to make sure they have the resources to be able to respond.”

The choice of Pence to lead the response was met with criticism by Democrats and others who pointed to Pence’s time as the governor of Indiana in 2015. The state faced a surge in cases of HIV, and state law at the time prohibited needle exchanges, a policy that health experts said exacerbated the outbreak. Pence, who opposed the exchanges, eventually signed a new law allowing them in some cases.