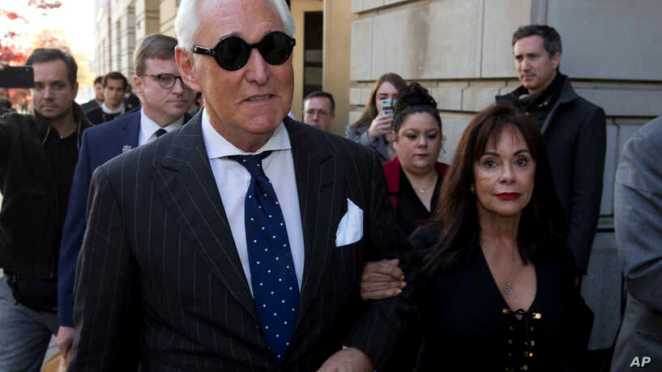 For decades, the U.S Justice Department has aspired to serve as a model law enforcement agency that largely operates independent of political influence. Federal prosecution decisions and sentencing recommendations have been made by career lawyers operating under strict rules of conduct, a rarity in countries with a weak rule of law.

Now that image is being severely tested in the wake of the Justice Department’s controversial decision Tuesday to reverse its own prosecutors’ recommendation that Roger Stone, a longtime confidant of U.S. President Donald Trump, receive seven to nine years in prison for crimes unearthed during the Mueller investigation into Russian election meddling. A jury convicted Stone in November of lying to Congress, obstruction of justice and witness tampering.

The extraordinary move led all four federal prosecutors assigned to the Stone case to withdraw from it, including one who resigned in protest, raising questions over whether Trump exerted undue influence over his attorney general, William Barr, to intervene in the case.

Amid calls for an investigation into Barr’s decision, House Judiciary Committee Chairman Jerrold Nadler announced Wednesday that the attorney general would testify before his panel on March 31 “to address numerous concerns regarding his leadership of the Department of Justice and the president’s improper influence over the department and our criminal justice system.”

A letter signed by Nadler and 22 other Judiciary Committee Democrats asserts that Barr “engaged in a pattern of conduct in legal matters relating to the president that raises significant concerns for this committee.”

Trump has denied speaking to Barr about the case, although he says he is glad the Justice Department interceded. Still, many administration critics suspect that undue political influence played a role. That perception will hurt U.S efforts to present itself “as a model country with a model rule of law,” said former Justice Department prosecutor David Axelrod, now with the Philadelphia law firm of Ballard Spahr.

A Justice Department official said Tuesday that the recommended sentence was “extreme and excessive and disproportionate to Stone’s offenses” and that the decision to reverse it was made before Trump vented about it in a tweet late Monday.

That may have been the case, but the circumstances surrounding the decision suggested that prosecutors felt they were overruled for political reasons. Just hours after the controversy heated up, Trump tweeted early Tuesday to congratulate Barr “for taking charge of a case that was totally out of control and perhaps should not have even been brought.”

“The appearance is that it was done either because the president asked to or because [Barr] thought it would be consistent with what the president wanted, not with traditional criminal justice values and traditions,” Green said.  “If that’s the case, then the sentencing is a real black eye for the Department of Justice from the point of view of its independence.”

The Justice Department is a uniquely American institution. Headed by the attorney general who reports to the president, it is part of the executive branch. Although some presidents have tried to use it to advance their political agendas, recent administrations of both political parties have largely kept the department at arm’s length, allowing it to conduct investigations and prosecutions independent of political pressure.

That long-standing tradition has been put to the test under the Trump administration as the president, embracing a sweeping view of executive power, has sought to influence the outcome of investigations affecting him and his associates.

Just four months into his administration, he fired FBI Director James Comey over the Russian election meddling investigation, which he called a “witch hunt” meant to oust him. He repeatedly attacked his first attorney general, Jeff Sessions, for recusing himself from the investigation before firing him in late 2018.

Last year, Trump caused a stir among law enforcement officials when he suggested that charges against a top Chinese telecom executive under indictment by the Justice Department could be dismissed as part of a trade deal with China.

Barr, a conservative Republican lawyer now serving his second tenure at the helm of the Justice Department, has emerged as one of Trump’s biggest defenders in the administration. His views of executive power mirror those of Trump.

Last year, Barr cleared Trump of obstruction of justice in connection with the Russia investigation after Mueller left the question undecided. That led to criticism that he was serving as the president’s personal attorney.

Current and former Justice Department employees say that the Stone incident has had a debilitating impact on many at the department.

“It’s safe to say my former colleagues are appalled by what’s going on in the Department of Justice,” said William Yeomans, a former longtime Justice Department official.  “Every colleague I’ve talked to is deeply affected by it.”

The four prosecutors’ withdrawal is likely to encourage other Justice Department employees to push back in the face of outside pressure and to report instances of undue political influence to the Justice Department’s inspector general.

‘Not what you signed up for’

“Memo to all career DOJ employees,” former Justice Department Inspector General Michael Bromwich tweeted on Tuesday.  “This is not what you signed up for. The four prosecutors who bailed on the Stone case have shown the way. Report all instances of improper political influence and other misdeeds to the DOJ IG, who is required to protect your identity.”

But reporting abuse to the watchdog goes only so far, Axelrod said.

“If you have a Department of Justice who’s now decided that it is going to be political and he is going to act at the behest of the president,” he said, “there is not much legally that can be done.”