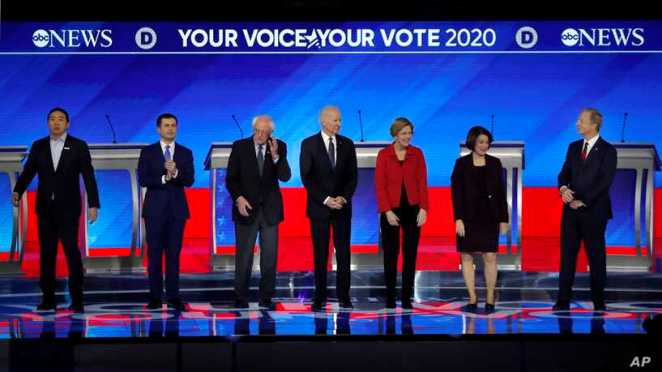 Iowa’s Democratic Party released the results of last week’s caucus which was saddled by confusion and chaos partially due to a faulty app.

Buttigieg took 14 of the 41 delegates up for grabs in Iowa, followed by Vermont Senator Bernie Sanders with 12, Massachusetts Senator Elizabeth Warren’s eight. Former Vice President Joe Biden took six and Minnesota Senator Amy Klobuchar has one delegate. No other candidate finished in the delegate count.

It will take 1,990 delegates to win the Democratic presidential nomination at the July convention in Milwaukee. Although it’s early in the race and 14 delegates many look paltry, every single delegate is important, especially with the race knotted up so far between Buttigieg and Sanders at the top and Warren not too far behind.

Democratic presidential contenders jabbed at each Sunday two days ahead of the crucial New Hampshire party primary, attempting to undercut each others’ credentials to take on Republican President Donald Trump in the November national election.

Biden, now in a fight for his political life, and Buttigieg claimed on ABC News’ “This Week” show that the race against Trump will be more difficult to win if Sanders, one of the leading Democratic contenders, is the Democratic nominee because he is a self-declared democratic socialist.

New day-to-day tracking polling in the rural northeastern state showed Sanders leading Buttigieg in a top pairing, with Biden and Warren of Massachusetts in a clear second tier standing and Klobuchar of Minnesota trailing further in fifth.

Tuesday’s vote comes a week after Buttigieg edged Sanders in the farm state of Iowa at Democratic caucuses in the race for eventual delegates to the party’s July national presidential nominating convention, with the other three candidates trailing well behind.

Buttigieg claimed that “it’ll be a lot harder” for Democrats to oust Trump from the White House after a single term with Sanders heading the ticket if they are forced to democratic socialism to voters.

Still, Buttigieg said, “I’d be the most progressive president we’ve had in a half century.”

Biden said that a Sanders-led ticket would be “a bigger uphill climb” to defeat Trump.

With the Democrats continuing their fight among themselves for the right to take on Trump, the president on Sunday basked again in his acquittal last week on two impeachment charges, retweeting praise from supporters and criticizing Democrats.

“The Dems are crazed, they will do anything. Honesty & truth don’t matter to them. They are badly wounded. Iowa vote count was a disaster for them!,” Trump said.

Biden, Sanders and Warren all attacked Buttigieg, who a year ago was an unknown political figure throughout the country. Until recently he was the mayor of  a city of 100,000 people, the fourth largest in the Midwest state of Indiana. With his Iowa win, he will be the first openly gay presidential candidate to win delegates for the national party nomination.

Biden, citing his long experience in Washington as his calling card to take on Trump, belittled Buttigieg’s South Bend mayoral experience and said he “hasn’t been able to unify the black community” in the city. In the U.S., African-Americans overwhelmingly vote for Democratic presidential candidates, but in 2016 a lower than expected black turnout hurt Hillary Clinton’s chances against Trump.

Buttigieg said that on his first day in the White House if he is elected, he would initiate “a systemic plan” to curb racism in the country.

Buttigieg has collected campaign funds from billionaires, saying he needed the donations in order to build a national political operation, but both Warren and Sanders, who have relied on smaller donations, attacked Buttigieg for the practice.“

The coalition of billionaires is not exactly what’s going to carry us over the top,” Warren said on ABC. “The way I see it now right now is that we have a government that works great for a thinner and thinner slice at the top. That’s been true for decades and it’s gotten worse and worse and worse.”

She said that the national government is run by billionaires “that make big campaign contributions or reach in their own pockets like Michael Bloomberg does. If it’s going taking sucking up to billionaires or being a billionaire to get the Democratic nomination to run for president, then all I can say is, ‘Buckle up America,’ because our government is going to work even better for billionaires and even worse for everyone else.”

Her reference to Bloomberg, a former mayor of New York, comes as he has spent a reported $250 million of his own money to campaign first for the Democratic nomination in the 14 states that are voting in party contests on March 3, while skipping the four Democratic elections in February, including New Hampshire.

Sanders assailed Buttigieg’s fundraising on the “Fox News Sunday” show, saying, “Here’s the problem, everybody knows this, whether you’re a conservative or progressive: It is the billionaires and the  big money interests that control what goes on what goes on politically, what goes on legislatively in this country.”

“And if you do as Mayor Buttigieg does, take huge amounts of contributions from the CEOs of the pharmaceutical industry, from financiers in fossil fuel industry, from the insurance companies, from Wall Street, does anybody seriously believe you’re going to stand up to the powerful interests and represent working people?” Sanders said.

Sanders asked rhetorically, “Do you think when the CEOs of major pharmaceutical companies contribute to your campaign that you are really going to take them on? I think common sense suggests that when you take money and you are dependent on billionaires, you’re not going to stand up to them and you’re not going to effectively represent working families.”