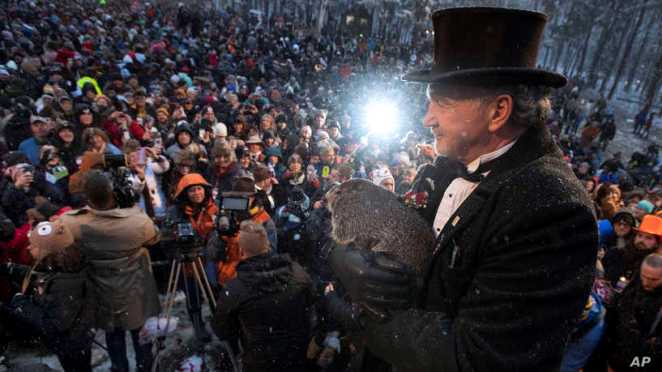 Punxsutawney Phil, the American groundhog famous for predicting the end of winter in the United States, did not see his shadow Sunday morning, indicating that spring will come early this year.

“There is no shadow of me, spring will be early — it’s a certainty!” he screamed as the audience around Gobbler’s Knob clapped.

Feb. 2 marks Groundhog Day, when traditionally a Pennsylvania groundhog known as Punxsutawney Phil makes an appearance above ground, near the cozy tree stump he calls home. Legend has it that if he sees his shadow, North America is in for six more weeks of winter weather.

The event traces roots back to legends in Germany, which indicate that if a rodent sees its shadow on February 2nd, winter continues.

A crowd gathered around Phil’s tree stump on Sunday morning before sunrise to behold the traditional prediction, as a group of top-hat wearing handlers surrounded the groundhog and lifted him up for the crowd to see.

Punxsutawney Phil is the most famous of the furry prognosticators. Generations of groundhogs, which are members of the marmot family known as woodchucks, have been predicting the weather since 1887.

Records going back to 1887 show Phil has predicted many more winters than an early spring. But his predictions are, understandably, dubious.