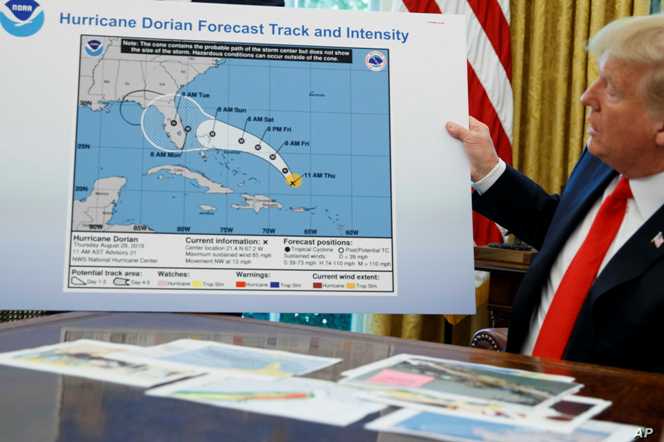 WASHINGTON – A flurry of newly released emails from scientists and top officials at the federal agency responsible for weather forecasting clearly illustrates the consternation and outright alarm caused by President Donald Trump’s false claim that Hurricane Dorian could hit Alabama.

What the scientists and officials found even more troubling was a statement later issued by an unnamed NOAA spokesman that supported Trump’s claim and repudiated the agency’s own forecasters.

The emails, released late Friday in response to Freedom of Information Act requests from The Associated Press and others, give an inside picture of the scramble to respond to the president and the turmoil it caused inside the federal agency.

“What’s next? Climate science is a hoax?” Craig McLean, NOAA’s acting chief scientist, wrote in an email sent to the agency’s top officials. “Flabbergasted to leave our forecasters hanging in the political wind.”

In a more formal letter, McLean wrote that what concerned him most was that the Trump administration “is eroding the public trust in NOAA for an apparent political recovery from an ill-timed and imprecise comment from the president.”

As Dorian headed for the southeastern U.S. in early September, Trump tweeted that Alabama was “most likely to be hit (much) harder than anticipated.” The National Weather Service in Birmingham corrected him, tweeting that “Alabama will NOT see any impacts from #Dorian.”

But Trump remained adamant, and NOAA came to his defense with the unsigned statement, which claimed some data provided to the president had indicated that Alabama could be hit by the hurricane and scolded the Birmingham office. The statement was issued after the White House and Commerce Department intervened, the AP and others reported at the time.

It provoked angry emails from within the agency and from the public.

Gary Shigenaka, a NOAA scientist, wrote to the agency’s acting administrator, Neil Jacobs, asking him to “reassure those of us who serve the public … that we are not mere pawns in an absurd game.”

In response, Jacobs defended the forecasters and said, “You have no idea how hard I’m fighting to keep politics out of science.”

The whole incident is perhaps best remembered for what became known as Sharpie-gate. In defending himself in the Oval Office, Trump displayed an NOAA map that was altered using a black marker to extend the hurricane’s projected path.

“Apparently the president is convinced that Alabama was in the path of Dorian and someone altered a NOAA map (with a sharpie) to convince folks,” NOAA official Makeda Okolo wrote in an email to chief operating officer Benjamin Friedman and others.