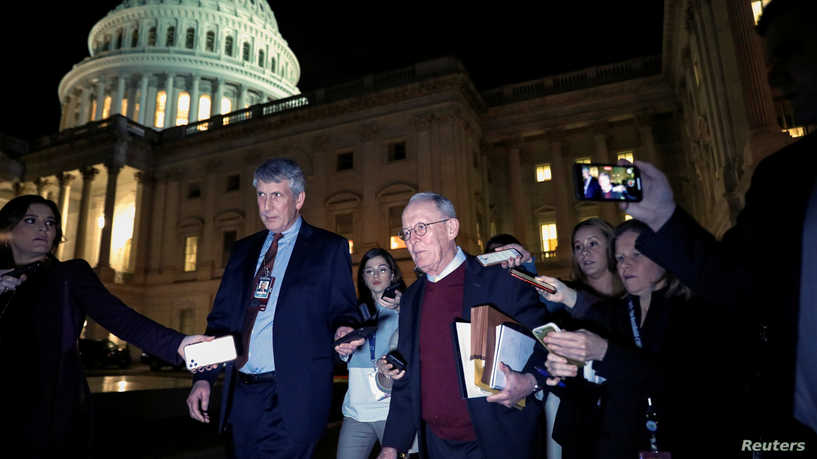 A U.S. Republican senator says there is no need to call witnesses to testify in President Donald Trump’s impeachment trial because Democrats have already shown Trump’s actions are “inappropriate” but not impeachable.

Republican Senator Lamar Alexander said in a statement Thursday, “There is no need for more evidence to prove something that has already been proven and that does not meet the United States constitution’s high bar for an impeachable offense. … The Constitution does not give the Senate the power to remove the president from office and ban him from this year’s ballot simply for actions that are inappropriate.

Shortly before the Senate convened Friday to vote on whether to allow new testimony and documents, Democratic Senator Chuck Schumer warned that denying new evidence would weaken the U.S. Constitution’s requirement of separation of powers among the three branches of government.

“If my Republican colleagues even refuse to consider witnesses and documents in this trial, what will the president conclude?” Schumer asked. “We all know he’ll conclude he can do it again and Congress can do nothing about it. He can try to cheat in his election again, something that eats at the roots of our democracy.”

Schumer noted that a vote against hearing new evidence will set the stage for Trump’s acquittal, which has been widely expected in the Republican-led chamber since impeachment proceedings began in the House of Representatives late last year.

“If my Republican colleagues refuse to consider witnesses and documents in this trial, the president’s acquittal will be meaningless because it will be the result of a sham trial,” Schumer said.

Four Republican senators would need to join 47 Democrats and independents in the 100-member Senate to allow witness testimony and additional documents in Trump’s impeachment trial. Only three Republicans — Senators Susan Collins, Lisa Murkowski and Mitt Romney — have indicated that they would vote for witnesses.

If the vote to hear witnesses ends in a 50-50 tie, Supreme Court Chief Justice John Roberts, the presiding judge, could cast a deciding vote. Such an outcome would be unprecedented in an impeachment trial.

The trial could end late Friday with Trump’s expected acquittal on charges of abuse of power and obstruction of Congress.

Calling witnesses, including possibly former National Security Adviser John Bolton, could extend the trial for another week or longer.

In a yet-to-be-published book, Bolton said Trump told him he was withholding $391 million in military aid to Ukraine until President Volodymyr Zelenskiy publicly announced an investigation of former Vice President Joe Biden, a potential political rival of Trump in the 2020 presidential election.

Democrats said reaching out to a foreign power to interfere in an election is an impeachable offense. Numerous Republicans disagree.

Trump’s lawyers say the president had the right to hold up the aid over concern for corruption in Ukraine and a demand that Europe do more to help Ukraine fight Russian-backed separatists.

Trump’s defense team and the impeachment managers Thursday spent their second day answering questions from the senators, which were read by Roberts.

Roberts refused to ask a question handed in by Kentucky Republican Rand Paul because it reportedly would have identified the whistleblower, whose concern about Trump’s July phone call in which he asked Zelenskiy for a “favor” led to the president’s impeachment. Paul denied the question would have outed the whistleblower.