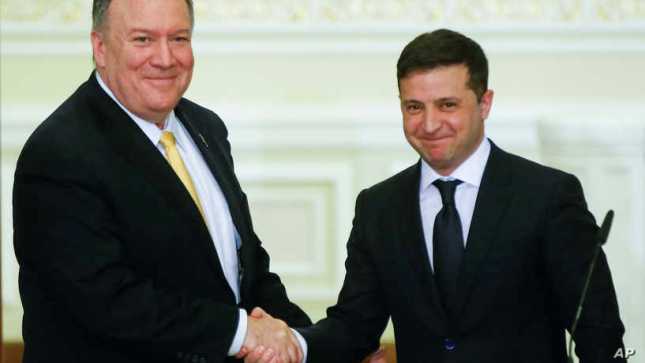 KYIV – Secretary of State Mike Pompeo vowed Friday that the Trump administration would not waver in its support for Ukraine and denied charges at the heart of President Donald Trump’s impeachment trial.

Pompeo met with Ukrainian President Volodymyr Zelenskiy on Friday and denied allegations that vital military aid and a White House visit were conditioned on a probe into former Vice President Joe Biden’s family.

“It’s just simply not the case. We will find the right time, we will find the appropriate opportunity (for the visit),” Pompeo said at a press conference after a meeting with Zelenskiy.

Pompeo is the highest-ranking American official to visit Ukraine since the impeachment process began last year. That process started with revelations about a July 25 phone call between Zelenskiy and Trump.

Zelenskiy said the impeachment had not had a negative effect on U.S.-Ukraine relations and thanked the Trump administration for its financial and military support that impeachment prosecutors say the president withheld in order to extract a personal favor from Ukraine.

Pompeo’s meetings in Kyiv come as t he GOP-majority Senate prepared to vote  on whether to hear witnesses who could shed further light on Trump’s actions toward Ukraine. The vote appeared likely to fail, however, as a key Republican said he would vote against allowing new testimony, boosting odds the Senate will vote to acquit in a matter of days.

A senior U.S. official in the meeting said Pompeo and Zelenskiy mainly discussed investment and infrastructure and that there was no talk of impeachment or corruption investigations. The official was not authorized to publicly discuss the private conversation and spoke on condition of anonymity.

At a press conference after the meeting, Pompeo assured Zelenskiy of Washington’s unwavering support.

“The United States understands that Ukraine is an important country. It’s not just the geographic heart of Europe, it’s a bulwark between freedom and authoritarianism in eastern Europe. It’s fields feed the European continent and its pipelines keep Europe warm in the winter,” he said.

Zelenskiy, in turn, expressed hope that the U.S. would more actively participate in resolving a separatist conflict in eastern Ukraine that has killed more than 14,000 people in the past five years. Zelenskiy also said he still wanted to meet Trump in DC as long it would be productive. “I am ready to go tomorrow,” he said.

Trump is accused of obstructing Congress and abuse of office for withholding a White House meeting with Zelenskiy and critical military aid to the country in exchange for an investigation into Biden, a political rival, and his son, Hunter.

Ukraine has been an unwilling star in the impeachment proceedings, eager for good relations with Trump as it depends heavily on U.S. support to defend itself from Russian-backed separatists. Trump, who has still not granted Zelenskiy the White House meeting he craves, has offered that support to some degree. Although the military assistance was put on hold, it was eventually released after a whistleblower complaint brought the July 25 call to light. The Trump administration has also supplied Ukraine with lethal defense equipment, including Javelin anti-tank weapons.

Pompeo has stressed the importance of the U.S.-Ukraine relationship, a sentiment long shared by Republicans and Democrats who see the former Soviet republic as a bulwark against Russian ambitions. But it’s a view that now has partisan overtones, with Democrats arguing that withholding aid from such a critical ally for political purposes is an impeachable offense.

The Senate is to vote on hearing impeachment witnesses later Friday. Democrats want to hear from former national security adviser John Bolton, whose forthcoming book reportedly says that Trump withheld the aid in exchange for a public pledge of a probe into the Bidens. That would back witnesses who testified before the House impeachment inquiry.

Ukraine has been a delicate subject for Pompeo, who last weekend  lashed out at a National Public Radio reporter for asking why he has not publicly defended the former U.S. ambassador to Ukraine, Marie Yovanovitch. She was removed from her post after unsubstantiated allegations were made against her by Trump’s personal attorney, Rudolph Giuliani.

Pompeo has been criticized for not publicly supporting Yovanovitch, her now-departed successor as chief of the Kyiv embassy, William Taylor, and other diplomats who testified before House impeachment investigators. Yovanovitch and Taylor have been attacked by Trump supporters and, in some cases, have been accused of disloyalty.

In the NPR interview, Pompeo took umbrage when asked if he owed Yovanovitch an apology, and maintained that he had defended all of his employees. In an angry encounter after the interview, he also questioned if Americans actually cared about Ukraine, according to NPR.

That comment prompted Taylor and Pompeo’s former special envoy for Ukraine, Kurt Volker, who also testified to the impeachment panel, to write opinion pieces discussing the importance of the country to U.S. national security and why Pompeo should be explaining its role to Americans as their top diplomat.

Pompeo brushed aside his reported comment, telling reporters aboard his plane that “of course, the American people care about the people of Ukraine” and said his message to American diplomats in Ukraine would be the same he gives to those at other embassies.

He said he would “talk about the important work that the United States and Ukraine will continue to do together to fight corruption inside of that country and to ensure that America provides the support that the Ukrainian people need to ensure that they have a free and independent nation.”

Pompeo twice postponed earlier planned trips to Ukraine, most recently in early January when developments with Iran forced him to cancel. Pompeo said he plans to discuss the issue of corruption but demurred when asked if he would specifically raise the Bidens or the energy company Burisma, for which Hunter Biden worked.

“I don’t want to talk about particular individuals. It’s not worth it,” he told reporters. “It’s a long list in Ukraine of corrupt individuals and a long history there. And President Zelenskiy has told us he’s committed to it. The actions he’s taken so far demonstrate that, and I look forward to having a conversation about that with him as well.”

Pompeo traveled to Kyiv  from London, which was the first stop on a trip to Europe and Central Asia that will also take him to Belarus, Kazakhstan and Uzbekistan.