Passengers on Wuhan Flights Shrug at ‘Temperature and a Form’ Screenings 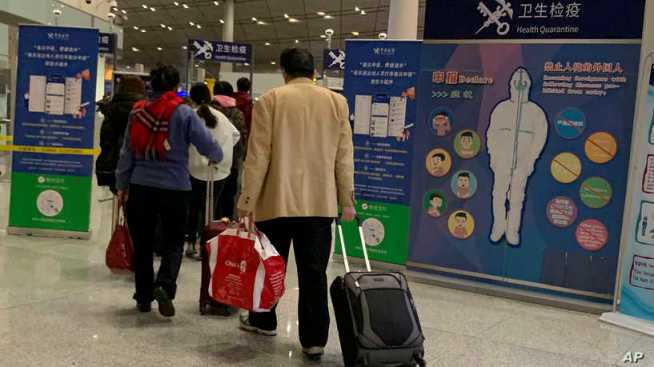 As of Saturday, the Wuhan Municipal Health Commission said four more people were diagnosed with the virus. The total number of cases stands at 62, with five people in serious condition, 19 people who have been discharged and the rest in stable condition. Two people have died, officials said.

On Friday, the U.S. Centers for Disease Control and Prevention said it would send 100 people to the three airports to screen arriving passengers for signs of the illness. They would focus on direct or connecting flights from Wuhan, the city at the heart of the outbreak, for now.

Since then, at least two direct flights to the U.S. from Wuhan have landed.

A flight arrived Saturday morning in San Francisco. People who went through the screening said it was an easy procedure. Their temperature was taken. They filled out a form.

Qi Zhou, a graphic designer, said, “They lead you to other room. So there are doctors there. There are different equipment there. They can measure your temperature there. They have all things there like face masks, the forms so you can let them know how to contact you.

“I think they are prepared well,” Zhou said.

Sunny Xing, a student, said the passengers were kept on the plane and were screened in groupings. “They told us to stay in the plane. They said first 10 people, you can go down,” Xing said. “Temperature and a form, that was it.”

The virus is believed to have started in Wuhan. It belongs to the same family of coronaviruses that includes the common cold as well as severe acute respiratory syndrome (SARS). SARS killed nearly 800 people globally during an outbreak 17 years ago. It also started in China.

Adding to health officials’ concerns is that many of the 1.4 billion people of China are expected to travel abroad during the Lunar New Year holiday that starts this week. There have been 45 cases in Wuhan, as well as a person with the virus in both Japan and Thailand.

Johnny Tang, a tech worker in Silicon Valley, was waiting for his parents to visit from Wuhan.

“Because they knew it was a planned visit to come here, for the past week, they stayed home to avoid any contact of any potential risk,” he said. After waiting about three hours, Tang and his parents were finally united.

“It’s OK. It was necessary. Government is responsible for the passengers. And the passengers for the country and the people they are visiting,” Fei Guo, Tang’s mother, said.

Li Ying, a businessman, agreed, saying, “It’s always better to have better control. There’s no control from our start point” in Wuhan.

Citing passenger privacy, a spokesperson with the CDC declined to say if any passengers from Wuhan were flagged at the three airports for possibly having the virus. Airport officials here have been told to expect the health screening to continue for two weeks.

VOA’s Mandarin Service spoke to three passengers who described the process: An airline crew member distributed forms seeking basic information, such as personal information and whether they had been to Wuhan. After leaving the plane, their temperature was taken, and if it was normal, they could proceed.

One passenger said no one’s temperature was above normal. If someone had been determined to be at risk of the virus, they would have been taken to a nearby hospital and isolated for further assessment, the CDC said.

A passenger, traveling with his wife and children, told VOA’s Mandarin Service the screening was “very simple and very easy to pass. Just fill in your symptoms, your information, and take your temperature.”

Chinese health officials said many of those who became sick worked at or visited a food market in the suburbs of Wuhan. Three cases have been detected outside China — two in Thailand and one in Japan – with health officials saying those patients had visited Wuhan before becoming sick.

CDC officials told reporters during a conference call Friday that they expect more cases will be reported outside of China. They said the risk of the virus to the American public is low, but they want to take proper precautions.

Health officials believe the virus spread in China from animals to humans. It is not clear if the virus is now capable of human-to-human transmission, but CDC officials say there are some indications that people may be able to spread the virus in a limited way. Scientists say that it is also possible that the virus could mutate to become more dangerous.

At least a half-dozen countries in Asia have also started health screenings for incoming airline passengers from central China.

Scott Pauley, a CDC spokesman, told VOA the CDC anticipates a higher number of Chinese travelers to the United States for the new year and has factored this into its planning.

China said it has increased disinfection efforts in major transportation hubs to help ensure the virus does not spread. Wuhan is a main hub in China’s railway network.

A State Department spokesman said the United States is closely monitoring the outbreak in China as well as actively working with governments across the region to combat spread of the virus.

The World Health Organization is warning that a wider outbreak of the virus is possible and has given guidance to hospitals worldwide. However, in a statement Thursday, the WHO said that it does not recommend instituting any trade or travel restrictions on China at this time.

The most common symptoms of the newly identified virus are fever, cough and difficulty breathing.

« ICE Ups Ante in Standoff with NYC: ‘This Is Not a Request’
House Outlines Impeachment Case; Trump Team Has Fiery Answer »