Trump Dismisses Dispute Over Whether Possible Soleimani Attack Was Imminent 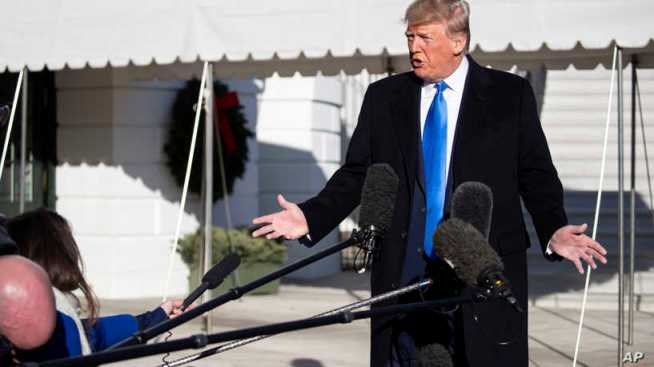 WASHINGTON – U.S. President Donald Trump on Monday dismissed as irrelevant questions about how imminent a threat Iranian Quds Force commander Qassem Soleimani posed to American interests in the Middle East when Trump ordered a drone strike that killed him.

Trump offered no evidence supporting his claim that Soleimani was about to blow up four U.S. embassies, after key U.S. officials declined Sunday to say they had seen such a specific threat.

On Twitter, Trump said the mainstream U.S. news media and “their Democrat Partners are working hard to determine whether or not the future attack by terrorist Soleimani was ‘imminent’ or not, & was my team in agreement. The answer to both is a strong YES., but it doesn’t really matter because of his horrible past!”

He contended that opposition Democrats and the news media “are trying to make terrorist Soleimani into a wonderful guy, only because I did what should have been done for 20 years. Anything I do, whether it’s the economy, military, or anything else, will be scorned by the Radical Left, Do Nothing Democrats!”

On Sunday, Defense Secretary Mark Esper told CBS News’ Face the Nation show, “I didn’t see the intelligence about Iran posing an imminent threat to four U.S. embassies, but I believe President Trump when he says there was one.”

The Pentagon chief added, “What I’m saying is I share the president’s view that probably- my expectation was they were going to go after our embassies.”

Esper, in another interview, told CNN’s State of the Union show, that he believed Soleimani was “days away” from launching an attack on U.S. facilities when the drone attack killed him Jan. 3.

Iran, in response, fired 16 ballistic missiles at bases in Iraq where U.S. troops are stationed, although the U.S. says it knew of the attacks hours ahead of time, allowing forces to bunker in safety. There were no reports of U.S. casualties.

But U.S. national security adviser Robert O’Brien told the Fox News Sunday show, “They can trust us on this intelligence” about the threat posed by Soleimani.

But he said it was “always difficult to know the specifics” of threats, saying they came from Soleimani and the Quds Force. He said there were “very significant threats to American facilities in the region,” without acknowledging any specific threat to four embassies.

Speaker Nancy Pelosi, leader of the Democrat-controlled House of Representatives, told ABC’s This Week, “I don’t think the administration has been straight with the Congress of the United States.”

After Tehran fired the missiles at the U.S. forces in Iraq, Trump backed off earlier threats of further military attacks against Iran, instead imposing more economic sanctions against the Islamic Republic.

O’Brien said the U.S.’s “maximum pressure” campaign against Iran is working. “Iran is being choked off,” he said, making it difficult for Tehran to “get the money” for continued funding for its Quds Force military operations in the Mideast.

The U.S. has expressed the view that its economic sanctions against Tehran will eventually force it to renegotiate the 2015 international treaty restraining Iran’s nuclear program, the deal Trump withdrew the U.S. from.

But Trump, in a tweet late Sunday, seemed indifferent whether there are new negotiations with Tehran, saying, “Actually, I couldn’t care less if they negotiate. Will be totally up to them but, no nuclear weapons and ‘don’t kill your protesters.'”

O’Brien said student protests in Tehran that started Saturday, after Iran admitted that it mistakenly shot down a Ukrainian passenger jet, killing all 176 aboard, in the hours after its attacks on the Iraqi bases, will also pressure Iranian leaders to renegotiate the nuclear treaty.