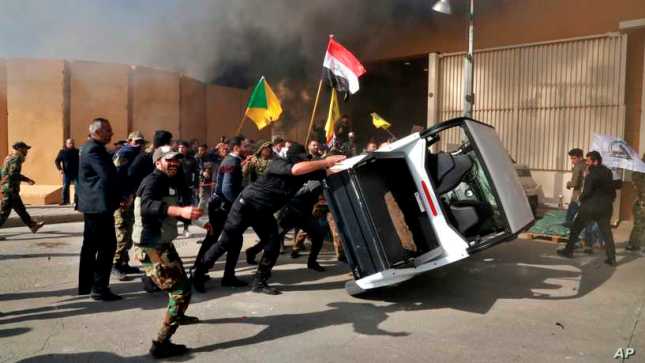 Hundreds of Iraqi protesters stormed the perimeter of the U.S. embassy compound in Baghdad’s fortified Green Zone, setting fire to one of its gates with some reportedly entering the building. Most of those involved in the attack appear to belong to pro-Iranian Shi’ite parties, which are upset about a U.S. airstrike on a pro-Iranian Kataeb Hezbollah militia base in the Iraqi border town of al-Qaim, which killed at least 25 people.

The mob of angry attackers used crowbars and street signs to smash the steel doors of the U.S. Embassy, after breaching the perimeter of the compound and setting fire to at least one of the security posts.  Iraqi media reported that government security forces did not intervene to stop protesters from breaching either the heavily fortified Green Zone, where the U.S. Embassy is located, or the embassy compound, itself.

The State Department issued a statement saying all U.S. personnel were secure, there was no breach and “there are no plans to evacuate” the embassy. U.S. Ambassador to Iraq Matt Tueller was on personal travel and not in the embassy at the time of the protest.

U.S. Defense Secretary Mark Esper announced Tuesday the United States is sending additional forces to support personnel at the embassy.  He did not provide details but news reports said some U.S Marine guards were being deployed.

“The secretary made clear the United States will protect and defend its people, who are there to support a sovereign and independent Iraq.  Both Abdul-Mahdi and Salih assured the secretary that they took seriously their responsibility for and would guarantee the safety and security of U.S. personnel and property,” a statement from State Department spokesperson Morgan Ortagus said.

“Iran killed an American contractor, wounding many. We strongly responded, and always will. Now Iran is orchestrating an attack on the U.S. Embassy in Iraq. They will be held fully responsible. In addition, we expect Iraq to use its forces to protect the Embassy, and so notified! Trump tweeted Tuesday.

U.S. officials said Sunday’s strikes – which were condemned by top Iraqi officials — were in response to a rocket attack on an Iraqi military base on December 27 that killed a U.S. defense contractor.  U.S. officials said the evidence left no doubt Kataeb Hezbollah was responsible.

On Monday, Iraq’s prime minister said the U.S. actions were unacceptable and “will have dangerous consequences.”

A statement from the Iraqi government further chastised the United States, describing the strikes as a “flagrant violation” of Iraq’s sovereignty, as well as of the rules governing the “goals and principles” of the U.S.-led coalition in Iraq to fight and defeat the Islamic State terror group.

U.S. officials brushed aside such criticism and instead placed blame on Iraq for allowing Iranian proxies to operate at will inside their country despite 11 such attacks on U.S. and coalition forces in the past two months.

“We have warned the Iraqi government many times, and we’ve shared information with them to try to work with them to try to carry out their responsibility to protect us as their invited guests,” a second senior U.S. official said. “They have not taken the appropriate steps.”

Kataeb Hezbollah, part of the state-sanctioned militias operating in Iraq known as the Popular Mobilization Forces (PMF), has denied responsibility for the Friday attack that killed the U.S. contractor. But it warned a response would be forthcoming.

Since May, the United States has sent an additional 14,000 forces to the Middle East, along with air and missile defense systems and additional reconnaissance capabilities, in response to what officials see as a growing threat from Iran and its proxies.

Officials said Monday that despite the build-up, the increased threat has yet to diminish.

U.S. officials also warned they planned to hit Iran with additional economic sanctions in the coming year, saying, “Iran’s economic problems and challenges are going to compound in 2020,” an official said.

Jeff Seldin and Edward Yeranian contributed to this report.