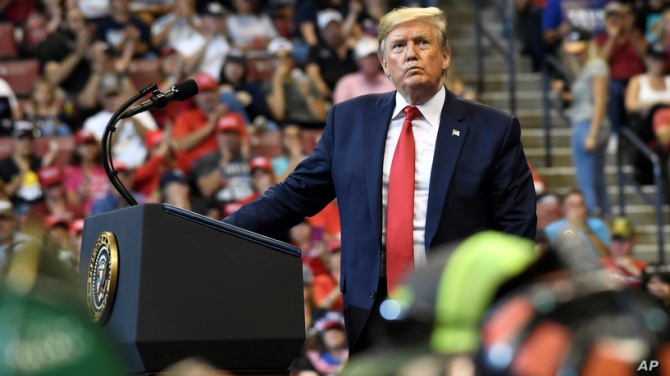 U.S. President Donald Trump learned about a whistleblower complaint regarding his relations with Ukraine before he decided to unfreeze nearly $400 million in military aid, according to a New York Times report published Tuesday.

The Times cited two people familiar with the matter, saying White House lawyers told Trump about the complaint in late August as they worked to determine whether they were required to send it to Congress.

That battle formed the early stages of what has become the focus of the impeachment inquiry now playing out in the House of Representatives.  Lawmakers received the complaint in late September and made a version of it public.

Since then, the Democrat-led House Intelligence committee has held both private and public sessions to hear testimony from current and former diplomats and other officials to examine allegations Trump withheld the aid to Ukraine to pressure Ukrainian President Volodymyr Zelenskiy to commit to an investigation of one of Trump’s potential opponents in the 2020 election, Democrat Joe Biden.

The House Judiciary Committee, which will decide whether to send articles of impeachment to the full House for a vote, announced Tuesday it would hold its first hearing December 4 and invited Trump to attend.

The hearing will look into what the committee calls the “Constitutional Grounds for Presidential Impeachment.”

The guidelines established by Democratic leaders say Trump and his lawyers would be given the chance to question the panel of still-to-be-named legal experts who will appear as witnesses.

Judiciary Committee Chairman Jerrold Nadler sent a letter to the White House inviting Trump to attend, calling it “not a right, but a privilege or a courtesy.”

“The president has a choice he can make: he can take this opportunity to be represented in the impeachment hearings, or he can stop complaining about the process,” Nadler said in a separate statement. “I hope that he chooses to participate in the inquiry, directly or through counsel as other presidents have done before him.”

Nadler assured Trump that he “remains committed to ensuring a fair and informative process.”

Nadler is giving the White House until Sunday night to respond.

U.S. Ambassador to the E.U. Gordon Sondland testified last week that a number of senior Trump administration officials were “in the loop” about Trump’s efforts to pressure Ukraine.