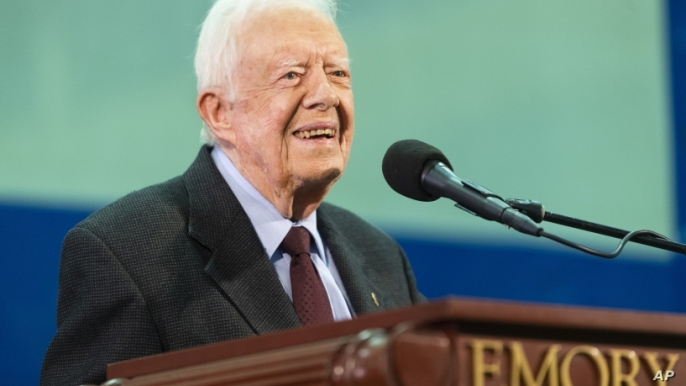 Former U.S. president Jimmy Carter has been released from the hospital after undergoing surgery to relieve pressure on his brain, according to a non-profit group founded by Carter.

The Carter Center said in a statement the 95-year-old was discharged from Emory University Hospital Tuesday in the southeastern U.S. city of Atlanta, Georgia.

The 39th U.S. president was admitted more than two weeks ago to relieve pressure on his brain caused by bleeding that started after recent falls.

The center said the surgery was successful and that he and his wife, Rosalynn, “look forward to enjoying Thanksgiving at home in the town of Plains (Georgia), where he will continue to recover.”

After one of several falls this year, Carter required hip replacement surgery.

While in Nashville, Tennessee to help build a home for Habitat for Humanity, Carter received 14 stitches in his forehead after falling on October 6.

He was briefly hospitalized after fracturing his pelvis on October 21.

Carter has also been cancer-free after receiving an ominous diagnosis for metastatic melanoma in 2015.

Carter, a Democrat who served in the White House from 1977 to 1981, is the oldest living former president in American history.