Trump Says He Would ‘Strongly Consider’ Testifying at His Impeachment Inquiry 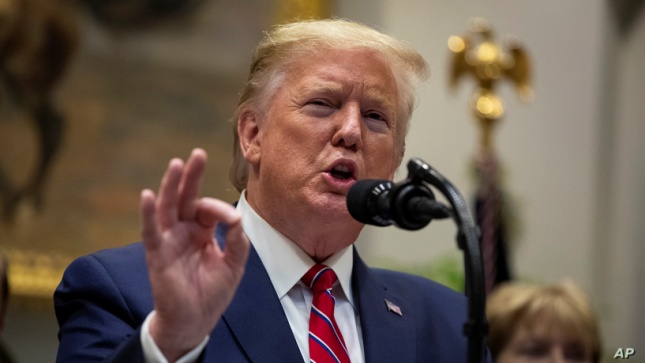 “Even though I did nothing wrong, and don’t like giving credibility to this No Due Process Hoax, I like the idea & will, in order to get Congress focused again, strongly consider it!” Trump said on Twitter.

In an interview Sunday on the news show “Face the Nation,” House Speaker Nancy Pelosi suggested that if Trump “has information that is exculpatory — that means ex, taking away, culpable, blame — then we look forward to seeing it.”

She added, “The president could come right before the committee and talk, speak all the truth that he wants … or he could do it in writing. He has every opportunity to present his case.”

Whether Trump would actually testify in person is uncertain.

Almost two years ago, Trump said he was ready and willing to testify in person as special counsel Robert Mueller investigated Russia’s meddling in the 2016 U.S. election, and whether as president, Trump had attempted to obstruct the probe.

Ultimately, he never testified face to face with investigators, preferring to only answer their questions in writing without cross-examination by prosecutors.  In his written responses, Trump said more than 30 times he could not remember or recall an event.

Trump has described as “perfect ” his July 25 call with Ukrainian President Volodymyr Zelenskiy during which he asked Zelenskiy for “a favor” investigating former Vice President Joe Biden, his son Hunter’s work for a Ukrainian natural gas company, and a debunked theory that Ukraine, not Russia, interfered in the 2016 U.S. presidential election.  Mueller and the U.S. intelligence community concluded that Russia interfered with the election.

Trump released a rough transcript of the call, but Pelosi said the full transcript “is tucked away in a high- highly sensitive, compartmentalized intelligence server so that we can’t see that.”

At the time of the call, Trump was blocking release of $391 million in U.S. military aid that Kyiv wanted to help fight pro-Russian separatists in the eastern part of the country. Trump eventually released the money to Ukraine on Sept. 11 without Ukraine opening the Biden investigations.

Trump has denied a reciprocal agreement with Ukraine in exchange for the military aid. On Tuesday, a second week of testimony from current and former government diplomatic and national security officials begins. The witnesses are expected to testify that they understood a quid pro quo is exactly what Trump initially had in mind.

“But we are winning, and we will win!” Trump contended.

Eight more officials are set to testify this week, with a central figure, Gordon Sondland, the U.S. ambassador to the European Union, scheduled to appear Wednesday.

In amended closed-door testimony, Sondland, a million dollar Trump political donor who was nominated by Trump for the EU posting in Brussels, said he had warned an aide to Zelenskiy in early September that it was unlikely Ukraine would get the U.S. military assistance it wanted unless Zelenskiy publicly committed to opening the investigation of the Bidens.

The claim of a quid pro quo is key to the efforts of Democratic lawmakers to impeach the country’s 45th president. Soliciting foreign assistance for help in a U.S. election violates campaign finance law.

Other figures linked to the impeachment inquiry have corroborated Sondland’s testimony. In a transcript of private testimony released Saturday, Tim Morrison, a White House national security aide, said in October that Sondland had spoken with Trump about a half-dozen times in recent months and had talked with a top Ukraine official about winning release of the military assistance Kyiv wanted in exchange for investigations that benefited Trump politically.

“His mandate from the president was to go make deals,” Morrison said of Sondland.

Morrison is set to testify publicly before the impeachment panel on Tuesday, alongside former U.S. special envoy to Ukraine Kurt Volker. Volker has testified that Rudy Giuliani, Trump’s personal lawyer named by Trump to oversee Ukraine affairs, was the driving force to get Kyiv to open the politically tinged investigation to help the U.S. leader.

Last week, David Holmes, an aide to William Taylor, the top U.S. diplomat in Kyiv, told impeachment investigations in private testimony that he overheard a July 26 cellphone conversation between Trump and Sondland at a Kyiv restaurant in which the president inquired whether Zelenskiy was going to pursue the Bidens and political investigations.

On Tuesday, the House Intelligence panel is also set to hear from Jennifer Williams, a foreign affairs aide to Vice President Mike Pence, and Lt. Col. Alexander Vindman, director for European affairs at the National Security Council. Both of them listened in on Trump’s July 25 call with Zelenskiy and voiced concerns about Trump asking for the investigations of the Bidens.

Trump disparaged Williams on Sunday, tweeting, “Tell Jennifer Williams, whoever that is, to read BOTH transcripts of the presidential calls, & see the just released ststement (sic) from Ukraine,” that it did not feel threatened by Trump’s request for the political investigations while the military aid was pending. “Then she should meet with the other Never Trumpers, who I don’t know & mostly never even heard of, & work out a better presidential attack!”

Aside from Sondland, the intelligence panel is also hearing Wednesday from Laura Cooper, a Defense Department official, and David Hale, the undersecretary of state for political affairs. Fiona Hill, the former National Security Council senior director for Europe and Russia, is testifying Thursday.

Political analysts in Washington say the Trump impeachment process could last for several months. If Trump is impeached by a simple majority in the House, a trial would be held in January in the Republican-majority Senate, where a two-thirds vote is needed for a conviction and removal from office.

The time frame could bump up against the first Democratic Party presidential nominating contests starting in February, when voters will begin casting ballots on who they want as the party’s nominee. Six Democratic senators are among those in the running, but could be forced to stay in Washington to sit as jurors in the 100-member Senate as it decides Trump’s fate.

Trump’s removal from office remains unlikely — at least 20 Republican Senate votes are needed for his conviction.

To date, a small number of Republicans have criticized Trump for his actions on Ukraine, but no Republican senator has called for his impeachment.