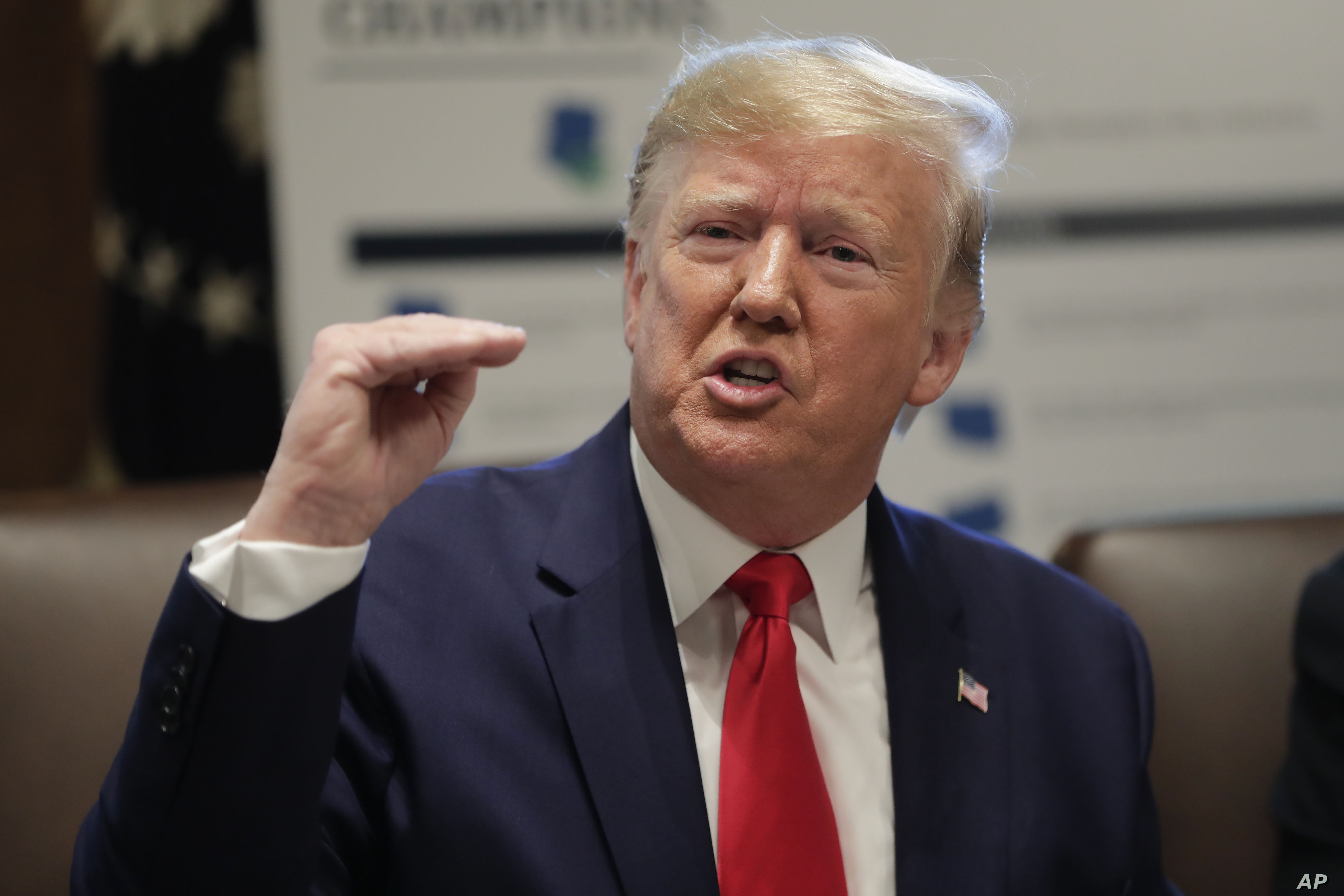 WHITE HOUSE – U.S. President Donald Trump is lashing out at Democrats and the media after criticism prompted him to cancel his plan to hold a meeting for leaders of major industrialized countries at one of his properties in Florida.

“You people with this phony emoluments clause,” Trump said to reporters during a Cabinet meeting Monday.

The Nobility Clause of the U.S. Constitution (Article 1, Section 9) is intended to prevent federal officeholders from receiving any type of compensation from foreign governments to avoid a corrupting influence.

“It doesn’t matter if you’re rich,” said Trump, brushing aside such constitutional concerns.

The Trump administration’s announcement last Thursday that next year’s Group of Seven summit would be held at the Trump Doral resort ran into an immediate backlash from lawmakers, including Republicans.

“The Democrats went crazy, even though I would have done it (for) free,” said Trump, who announced late Saturday he was dropping the idea. “Best location, right next to the airport” in Miami.

Critics argued even if Trump’s property was willing to provide rooms and services “at cost,” as announced by acting White House chief of staff Mick Mulvaney, it would still have amounted to the president profiting from his public office to benefit his private business.

“Everybody in the G-7 would have had their own building,” explained Trump to reporters. “It would have been the greatest G-7 ever.”

In an attempt to justify there is nothing wrong with mixing the presidency and his real-estate holdings in this manner, Trump is reaching back to the first president of the United States, George Washington, in the late 18th century.

“He ran his business simultaneously while he was president,” noted Trump. “George Washington, they say, had two desks. He had a presidential desk and a business desk.”

Washington, indeed, did run his 3,200-hectare farm while in office. Historians note that Congress was only in session December through March, and there was a skeleton federal government the rest of the year.

“There was no conflict in Washington overseeing his business and also being president,” Jeffrey Malanson, associate professor of history at Purdue University, told VOA. “He wasn’t directing the federal government to purchase tobacco or wheat or nails from his own plantation.”

Joseph J. Ellis, who has written best-selling biographies about early U.S. presidents, says Washington never faced accusations of enriching himself while in office.

“In fact, he decided things that were not in his own economic self-interest,” Ellis told VOA.

As for Trump’s remark about the separate George Washington desks, Ellis, a recipient of the Pulitzer Prize for history, said: “I think that’s just fantasy.”

Ethics laws were strengthened over the centuries. When Jimmy Carter was president in the late 1970s, he placed his large farm and peanut warehouse in a semi-blind trust to avoid conflicts of interest.

During Monday’s Cabinet meeting, Trump was asked by a reporter about his plans now for the G-7 summit after abandoning the preferred venue that carries his name.

« Censure: When Congress Punishes One of Its Own
US Quietly Reduces Troop Force in Afghanistan by 2,000 »