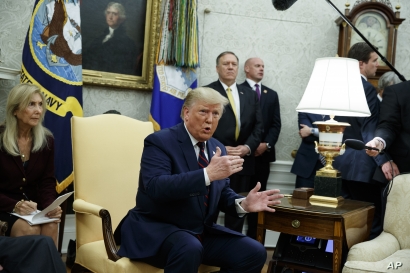 WASHINGTON – After a thousand days of President Donald Trump in the White House, official Washington found itself consumed by the twin crises of impeachment and Syria this week.

Even as the president is trying to fend off congressional Democrats moving toward impeachment, he also faces a fierce backlash from Democrats and many Republicans over his decision to pull U.S. forces out of Syria.

Trump is used to weathering political storms, but this one is particularly intense and comes at a time when he is looking ahead to a re-election campaign next year.

From the start, Trump has been on the defensive over his decision to pull U.S. troops out of Syria.

On Thursday, Vice President Mike Pence announced that the U.S. and Turkey had agreed to a cease-fire against Kurdish forces in northern Syria.  Trump welcomed the development during a trip to Texas, calling it “an amazing outcome.”

Trump’s abrupt decision to withdraw from Syria drew fire from both opposition Democrats and several Republicans, including South Carolina Senator Lindsey Graham, often one of the presidents most loyal supporters.

“So this is the president exercising his judgment in a way that I think is out of line with the advice he has been given, dangerous, and I hope he will reconsider,” Graham told reporters at the Capitol on Wednesday.

The Syria controversy erupted as Trump was already busy fending off a Democratic-led impeachment inquiry in Congress spurred by his request to Ukraine to investigate political rival Joe Biden.

Trump has blasted the impeachment investigation as a partisan witch-hunt and vented to supporters last Saturday in a speech to the Value Voters Summit.

With impeachment as a backdrop, tensions boiled Wednesday over at a White House meeting with Democrats about Syria.

During the meeting Trump called House Speaker Nancy Pelosi “a third grade politician.” Pelosi described the president as having a “meltdown.” Trump’s comments targeting Pelosi prompted Democratic congressional leaders to walk out of the meeting, including Congressman Steny Hoyer, the House Majority leader.

“I have served with six presidents. I have been in many, many, many meetings like this. Never have I seen a president treat so disrespectfully a co-equal branch of the government of the United States,” said Hoyer.

There are signs the political pressure on the president over impeachment appears to be mounting, according to analyst John Fortier at the Bipartisan Policy Center in Washington.

“The president’s removal [from office] and the president’s reputation afterward is something that clearly he must be thinking about. But in terms of the way the White House is reacting, I do think that they have a similar way of fighting all sorts of controversies, and it is not to back down.  It is to really stand up and push back and that is what we have been seeing.”

Expect to see more of that aggressive political pushback as the impeachment drama moves on, even as both sides in the impeachment inquiry keep a close watch on public opinion.

“Republicans have to be very careful not to be seen as defending the indefensible,” said Brookings Institution scholar William Galston. “And if they take the position of denying that the president did anything wrong, I think they are going to lose ground with the American people.”

Recent polls have shown growing public support for the impeachment inquiry. But the surveys also show Americans remain divided on whether Trump should ultimately be impeached and subsequently removed from office.

Under the U.S. Constitution, the House can impeach the president for treason, bribery or other high crimes and misdemeanors. If a majority of the House votes impeachment, the president would face a trial in the Senate where a two-thirds majority is required for conviction and removal from office.

Trump has proudly cast himself from the start as a political disrupter, and there could be more to come as the impeachment battle unfolds, according to University of Virginia historian Barbara Ann Perry.

“So far, he has bombarded and exploded all of the norms and all of the precedents of the previous 44 [presidential] administrations. So nothing to me seems out of bounds for this particular president,” Perry told VOA via Skype.

No matter how the impeachment battle turns out, one likely result is a deeper partisan divide, said Vanderbilt University Professor Thomas Schwartz.

“It will probably polarize the country even more. I think you will have a very divided country, in a way similar to what you saw in 1999 and 2000 after the Clinton impeachment and then the divisive election of 2000.”

All of this is coming as the country prepares for the next presidential election in 2020, with many political analysts predicting a record voter turnout amid intense interest and mobilization in both major political parties.

« White House Admits Quid Pro Quo Between Trump and Ukraine
Censure: When Congress Punishes One of Its Own »