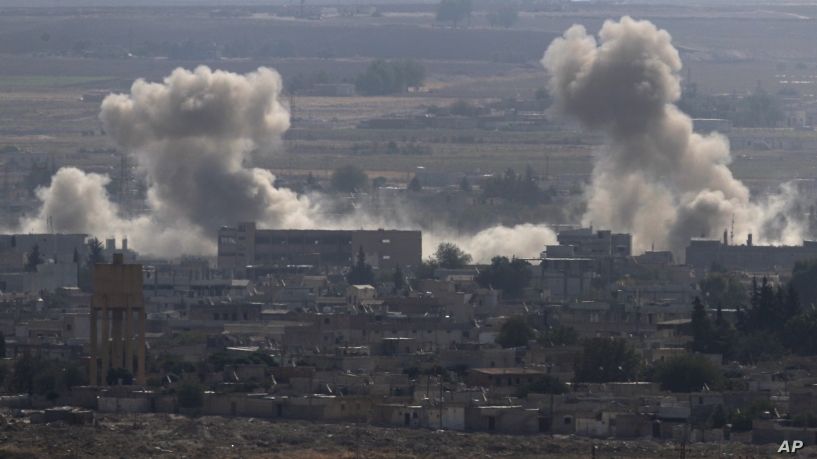 U.S. President Donald Trump is pressuring Turkey to stop its offensive in northern Syria with calls for a cease-fire and sanctions against Turkish officials, as he plans to send a delegation led by Vice President Mike Pence to Ankara for talks to resolve the situation.

Trump’s action follows sharp criticism in the week since the White House announced Turkey was going forward with its long-held plans to try to carve out a buffer zone along its border with Syria free from the U.S.-backed Kurdish fighters it accuses of being terrorists linked to separatist Kurds in Turkey.

Turkey’s incursion pushed the Syrian Democratic Forces to reach an agreement with the Syrian government that has brought Syrian troops back into the northeastern part of the country for the first time in years, including on Monday reaching the town of Manbij.

A U.S. military spokesman said Tuesday American troops left the town of Manbij as part of their withdrawal from the area.

Trump spoke Monday with both Turkish President Recep Tayyip Erdogan and General Mazloum Kobani, the head of the mostly Kurdish SDF that the United States has relied on to battle Islamic State militants in Syria.

“We all firmly believe that the United States is the only party with the gravitas to arbitrate with both sides,” a senior administration official told reporters.

Trump directed the Pence-led delegation to go to Turkey “as quickly as possible to see if we can achieve a deal,” according to an administration official.

In addition to the call to halt the military operation, the United States raised steel tariffs and halted negotiations on a $100-billion trade deal with Turkey.

U.S. Democrats and Republicans have faulted the Trump administration for what is unfolding, saying the withdrawal of U.S. forces from the area cleared the way for the U.S. ally SDF to be put in danger as well as the potential for Islamic State militants under SDF detention to break free and stage a resurgence.

She said both Republicans and Democrats in the House and Senate will proceed this week with “action to oppose this irresponsible decision.”

Republican Senate Majority Leader Mitch McConnell said that while Turkey does have legitimate security concerns linked to the Syrian conflict, the operation against the U.S.-backed Kurds jeopardizes the progress won against Islamic State.

“Abandoning this fight now and withdrawing U.S. forces from Syria would re-create the very conditions that we have worked hard to destroy and invite the resurgence of ISIS,” McConnell said.  “And such a withdrawal would also create a broader power vacuum in Syria that will be exploited by Iran and Russia, a catastrophic outcome for the United States’ strategic interests.”

A senior administration official rejected criticisms against Trump in the call with reporters Monday, saying only Erdogan’s actions are to blame.

The official said Erdogan “took a very, very rash, ill-calculated action that has had what, for him, were unintended consequences.”

He called the Turkish offensive “unnecessary and impulsive,” and said it has undermined what he called the successful multinational mission to defeat Islamic State in Syria.

Esper said he plans to go to Brussels next week to press other NATO allies to apply sanctions on Turkey.