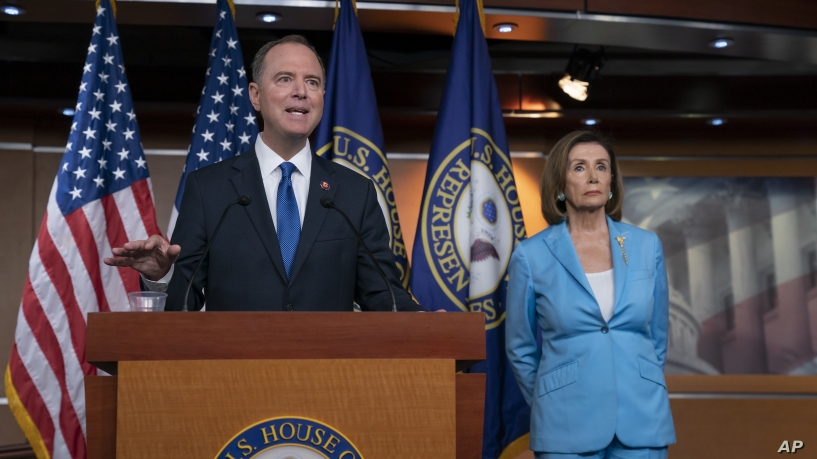 WHITE HOUSE – The White House is being warned by leaders of the opposition Democratic Party, who control the House of Representatives, to expect a subpoena for documents about President Trump’s dealings with Ukraine.

Asked by a reporter at a news conference on Wednesday if he would cooperate with such requests from the legislative body, which has launched an impeachment inquiry, Trump replied, “I always cooperate.”

At the same time, Trump described the Democrats’ investigation as “a hoax,” but added “we’ll work together with shifty Schiff,” referring to House Intelligence Committee Chairman Adam Schiff, a Democrat.

Trump also accused Schiff of committing “treason” for how he has depicted his July 25 phone call with the leader of Ukraine that led to a whistleblower complaint from a member of the U.S. intelligence community who had been assigned to the National Security Council.

Schiff earlier in the day warned that any efforts by the Trump administration to impede the impeachment investigation will be construed as proof of obstruction of justice.

“We are concerned that the White House will attempt to stonewall our investigation,” Schiff, alongside House Speaker Nancy Pelosi, said during a news conference on Capitol Hill.

“We’re not fooling around,” Schiff warned the Trump administration.

Before filing the formal complaint, the whistleblower had provided an account of his concerns to a congressional aide, who relayed them to Schiff, The New York Times reported on Wednesday.

Asked about the report at the news conference along Finnish President Sauli Niinisto, Trump responded that “it shows that Schiff is a fraud” and the House staff member “probably” helped write the whistleblower’s complaint. A spokesman says Schiff was aware of some of the information in the complaint. CNN reports the whistleblower’s attorney says no one from the House Intelligence Committee helped his client write the complaint.

Trump on Wednesday repeated his assertion that “Biden and his son are stone-cold crooked.”

The president also claimed “some bad things have gone on [with the whistleblower] and we’ll get to the bottom of it.”

Since the beginning of the impeachment probe, Schiff and other Democratic committee chairs have requested documents and depositions from current and former Trump administration officials related to interactions with Ukraine.

But Secretary of State Mike Pompeo said Tuesday his employees would not appear for scheduled depositions with House investigators.

The secretary of state on Wednesday admitted he was on the call in question.

“I was on the phone call,” Pompeo confirmed at a news conference in Rome, without offering details about what was said during the conversation between Trump and Zelenskiy.

Trump insists he did nothing wrong in the phone call. He is criticizing the impeachment inquiry as a “coup” and accusing the Democrats of wasting time on “bullshit.”

Trump on Wednesday reiterated to reporters in the Oval Office that he had a “perfect conversation” with Zelenskiy.

The House intelligence, oversight and foreign affairs committees had asked to hear testimony Wednesday from former U.S. Ambassador to Ukraine Marie Yovanovitch, but that session has been postponed until next week. Former U.S. envoy to Ukraine Kurt Volker is expected to speak to the committees on Thursday.

House Democrats are pursuing the impeachment inquiry to see whether they want to officially bring charges against Trump under their constitutional authority to seek to remove officials who engage in “treason, bribery, or other high crimes and misdemeanors.”

Trump, at Wednesday’s news conference, also threatened to sue some of the people involved in the investigation into whether he or his 2016 election campaign colluded with Russia.

A 448-page report by a special counsel, former FBI Director Robert Mueller, concluded Russia attempted to interfere in the election. The document drew no conclusion as to whether Trump obstructed justice, but also stressed the two-year investigation did not exonerate the president.