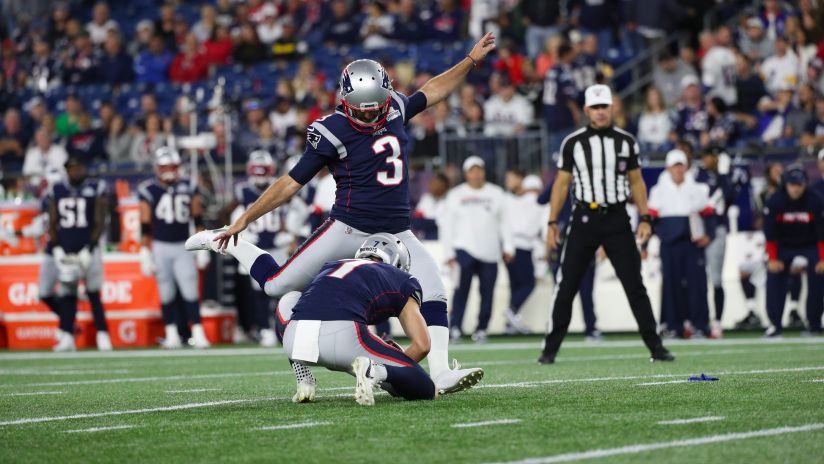 The Patriots placed Stephen Gostkowski on Injured Reserve on Wednesday, dealing a significant blow to an important position. It was just the second time in Gostkowski’s 14-year career that an injury has sidelined him, with the first being in 2011.

The kicker had made seven-of-eight field goals and 11-of-14 extra points this season, and while he had fought some inconsistency, he was a reliable fixture from three championship teams. Devin McCourty relayed what made Gostkowski such an important part of the team, both on and off the field.

“I mean, all-time great. I think because of Slate [Matthew Slater] always being the special teams captain, I think maybe sometimes the outside world doesn’t know how much he means to our special teams unit and to us as a team,” said McCourty.

“You never waver when there’s a kick on the line,” continued McCourty. “Kickoffs, playing against tough returners, sometimes the best thing to stop a tough returner is Steve kicking the ball out of the end zone. He’s meant a lot to this team obviously for the whole time I’ve been here. You see a lot of that in the record books, he has a lot of records for this franchise. But I always speak on how much he means to the locker room. Always keeping it light, he’s the best at every little like thing and tournament we do in the locker room. He’ll definitely be missed throughout the year just having his presence in there.”

“He’s meant a lot,” said White. “He’s an awesome guy. Our lockers are near each other. He jokes around with me all the time about how I don’t talk that much and things of that nature, but [he is a] good friend of mine. Like I said, tough to see guys like that go down because they’re a big part of our team.”

The Patriots had multiple kickers in on tryouts, with Adam Schefter reporting it was down to Mike Nugent and Kai Forbath. Whoever replaces Gostkowski will have big shoes to fill, but Matthew Slater said they shouldn’t try to do too much.

In more positive news, Kyle Van Noy was named AFC Defensive Player of the Week after his eight tackles, two sacks and two forced fumbles against the Bills. Van Noy has quietly emerged as one of the best and most reliable defenders on the team since being acquired via trade in 2016.

Captain Devin McCourty explained how much Van Noy means to the defense.

“To just see his growth as a player, to be able to play outside linebacker, defensive end, inside linebacker, he plays so many different roles for us defensively,” said McCourty. “We’re not really surprised when he goes out there and has a game like that. Very similar to the game he had last year in Buffalo, being all over the field making plays. I think it’s great for him. We count on his leadership, his communication on the field.

“So I’m not surprised by the honor because he’s been playing great football for a while for us now. I think it’s awesome for him to get the recognition.”

Van Noy appreciated the award but in true Patriots form was quick to deflect the credit and already looking ahead to the next opponent.

“I think it’s a good honor but at the same time it wouldn’t have happened if not for my teammates doing their spot and their job,”
said Van Noy in the locker room. “It’s an honor representing them, and being named Defensive Player of the Week, but I’m ready to go against the Redskins already.

Stephen Gostkowski was missing from practice, a precursor to his move to IR. Also not seen was Ben Watson. The tight end is eligible to return to the team this week, his presence will continue to be something to look out for.

A new number 17 also was present, later identified as new practice squad receiver Kelvin McKnight, an undrafted rookie out of Samford who spent the summer in the Broncos training camp.

The full injury report was as follows:

In other news, Jordan Richards was signed to the team’s open roster spot. The four-year veteran was a free agent after spending his first three years with the Patriots before being traded to the Atlanta Falcons for a 2020 seventh-round pick. In his final season with the Pats, Richards played 68.2 percent of the special teams snaps and that’s likely where he’ll fit back into the lineup, as the special teams have had their struggles this season outside of rookie punter Jake Bailey.

“It’s just exciting, it’s exciting to have an opportunity to play football,” Richards said just hours after his re-arrival in Foxboro. “Had a first taste of what it’s like to watch other people play. Obviously you want to be on the field and part of the locker room camaraderie of it all, so I’m glad to be back.”

Josh Gordon on being a more versatile receiver in the offense this season:

“I think I’ve moved around a lot, learn different nuances of the game, different positions. I think it’s really fun, just trying out different spots, playing from the slot, outside, motioning and shifting around, having that familiarity is really fun.”