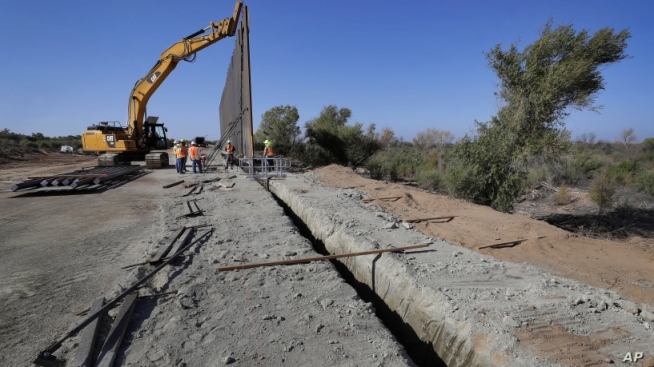 WASHINGTON — After more than two years of political and legal strife, U.S. President Donald Trump appears to be prevailing in revamping immigration policy and building portions of a wall to limit migration across the southern U.S. border.

Trump views boosting border security as a “promise kept” to the American people, one he will tout to voters in his re-election bid next year.

“[W]e’re doing it. We get it done,” the president said this past week. “The [border] wall is being built.”

The administration reports nearly 100 kilometers of new border wall construction since 2017 and aims to extend barriers by more than 600 kilometers by the end of next year. Meanwhile, apprehensions of migrants at the U.S.-Mexico border fell from 144,255 in May to 64,006 in August, a 56% decline.

While migrants continue to arrive at the border, far fewer have been held on U.S. soil since the administration reached an accord with Mexico under which asylum-seekers are returned to Mexico to await their immigration court hearings. Separate pacts with Guatemala, El Salvador and Honduras, designed to deter U.S.-bound migration, establish them as asylum destinations where claimants must seek protection before pursuing a case in the United States.

While many of Trump’s migration and border security initiatives face a myriad of legal challenges, the U.S. Supreme Court earlier this month temporarily greenlighted the administration’s policy of denying asylum to non-Mexicans who had not sought protection in a third country they transited.

“The president’s doing a lot of good things right now in the immigration space,” U.S. Citizenship and Immigration Services acting director Ken Cuccinelli said at a Washington news event Thursday. “There’s no one big thing. It really makes more sense to look at it as a lot of little things that together form the administration’s forward-marching policies.”

“Since taking office, the president has systematically worked to politicize the U.S. immigration system and polarize Americans on this issue,” the top Democrat on the Senate Foreign Relations Committee, Bob Menendez of New Jersey, recently said. “I believe the president is engaged in a calculated attempt to aggravate regional migration dynamics for domestic political gain at the expense of our national security.”

Trump pulled out a surprising victory over Democrat Hillary Clinton in 2016, in part by promising to stem the tide of migration and to build a “big, beautiful wall” along the southern border.

Gallup polling since the start of his administration has found public approval of Trump’s handling of immigration hovering between 38% and 42%, with disapproval ranging from 57% to 61%. The net-negative ratings point to policies that are far more popular with the president’s supporters than the nation as a whole.

“I think the core Trump supporter has to be happy with what the president has delivered on immigration,” Washington-based Republican strategist John Feehery said. “He [Trump] is not going to get everything he wanted. He’s not going to get all the wall built, he’s not going to cut off all illegal immigration. But people know that he’s trying hard to keep faith with his campaign promises.”

Feehery added, “On the other side, the Democrats are not happy with what the president has delivered and they think that he is still a racist.”

Mexico not paying for the wall

One glaring 2016 campaign promise Trump has not kept is getting Mexico to pay for border wall construction. Faced with Mexico’s flat refusal, and Congress’ denial of substantial wall funding, Trump in February declared a national emergency at the border in order to redirect billions of dollars from the Pentagon to wall construction.

The Senate twice has voted to rescind the emergency declaration, but it fell short of veto-proof majorities each time.

Potential pitfalls could loom for Trump’s message that he is getting results on immigration and border security. For instance, the recent drop in migrant apprehensions came during the hottest months of the year, when migrant arrivals at the border typically wane. At present, it is too soon to know whether they will pick up again as temperatures moderate.

“[W]e still need to see what happens with the southwest border apprehension numbers,” said Bipartisan Policy Center senior analyst Cristobal Ramon. “If the number of people who are arriving spike up in this coming fiscal year, it’s going to be a question of whether or not he [Trump] can actually legitimately say he’s winning [on immigration].”

Fewer migrants held on U.S. soil may alleviate sharp criticism the administration has faced over overcrowding, unsanitary conditions and child separations at detention facilities. Already, however, immigrant rights groups and some U.S. lawmakers are accusing the White House of placing asylum-seekers at the mercy of gangs and cartels by forcing them to stay in Mexico.

Human rights groups, meanwhile, decry the administration’s asylum pacts with Central American countries with staggeringly high murder and poverty rates — the very nations from which a large proportion of migrants have departed.

Even so, conventional wisdom holds that concern for the fate of migrants is more likely to animate Democratic voters and some moderate Republicans than Trump’s core supporters.

“What the numbers show is that when the president stands up for working class Americans with better trade deals and stronger borders, that he appeals to Americans who are trying to find work,” Feehery said. “Moderate Republicans are never going to like this president, and probably are never going to vote for him.”

“Presidents have lots of opportunities to broaden their base [of supporters], Trump hasn’t really even tried,” University of Virginia political analyst Larry Sabato said. “They [Trump’s re-election team] are depending on that intense base, not just to turn out, but to bring 10 friends [to the polls].”

With the 2020 presidential contest looming and an impeachment inquiry underway in the House of Representatives, the man some see as Trump’s “immigration czar” has signaled an awareness that the president’s time in office may end before he implements all he desires on border security and immigration.

“Time is our opponent here,” Cuccinelli said. “We know that we have to, you know, get things done by the latter part of 2020. You can’t assume anything going forward. We have a work window that we have to operate within.”