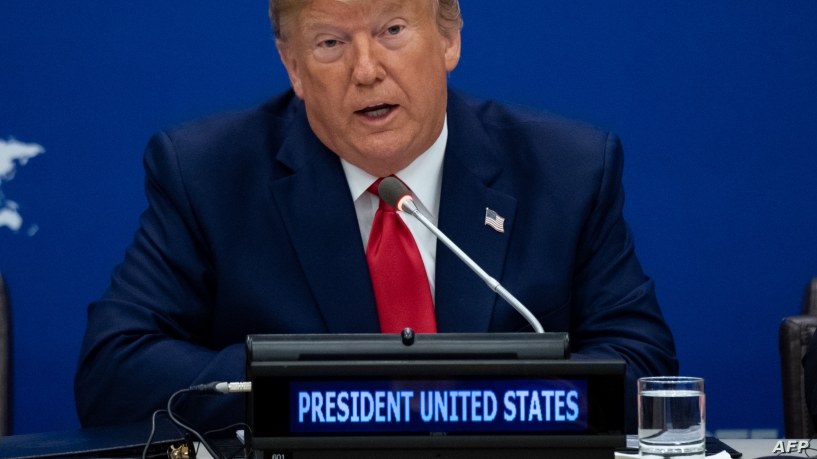 U.S. President Donald Trump has dismissed any talk about impeachment by some Democrats over reports that he tried to pressure Ukraine’s president to investigate leading Democratic presidential candidate Joe Biden.

Trump told reporters as he arrived at the United Nations that he is not taking such threats “at all seriously.”  He also again said he discussed what he called  “corruption” concerning Biden and his son with Ukrainian President President Volodymyr Zelenskiy.

A Wall Street Journal report says Trump urged Zelenskiy eight times to investigate Biden and his son Hunter, and whether a Ukrainian gas company tried to win favors by hiring Hunter while Joe Biden was U.S. vice president. The reports say Trump was looking to get Zelenskiy to collaborate with Trump’s lawyer, Rudolph Giuliani, to investigate the Bidens.

The newest controversy surrounding Trump began last week when reports emerged that an unidentified whistleblower in the national intelligence community became alarmed about a series of actions inside the Trump administration. They include what is now known to be Trump’s telephone call with Zelenskiy.

Trump critics, including a number of Democratic lawmakers, say if Trump urged Zelenskiy to investigate Biden to discredit the former vice president, that would be a direct appeal to a foreign government to interfere in a presidential election — a potentially impeachable offense. Democrats also want to know if Trump promised Zelenskiy anything in return for an investigation.

Amid calls to release the transcript of phone calls with the Ukrainian leader, Trump has said White House will “make a determination” whether to release it.

An angry Biden said “there is truly no bottom to President Trump’s willingness to abuse his power and abase our country.” Referring to next year’s election, Trump knows “I’ll beat him like a drum,” Biden said.

“I’m not looking to hurt him with respect to his son. Joe’s got enough problems,” Trump said Sunday without specifying what those problems are.

As vice president under Barack Obama, Joe Biden went to Ukraine in 2016 and threatened to withhold billions of dollars in U.S. loan guarantees unless the government cracked down on corruption. Biden also demanded that Ukraine’s chief prosecutor Viktor Shokin be fired.

Shokin had previously investigated the gas company on which Hunter Biden served on the board. But the probe had been inactive for a year before Joe Biden’s visit. Hunter Biden has said he was not the target of any investigation and no evidence of any wrongdoing by the Bidens has surfaced.